Children of the 1960s and ’70s first learned one of life’s great lessons—you get what you pay for—in the pages of their favorite comic books. Cheezy comic book mail order ads featured fantastical items that could not be ignored by wide-eyed children. Live sea monkeys! X-Ray Specs! Atomic Joy Buzzers!—the very objects of a child’s imagination, right there on the page and available for a paltry sum. Exactly what kids really wanted!

When the cash was sent, the waiting begins. Days and then weeks pass. All the while the mind races on the possibilities of what might arrive: a treasure chest full of army men, snapping gum to prank your older brother, an aircar hovercraft, for Pete’s sake! Surely this loot will make any kid the hero of their block.

Finally, the item arrives. The envelope is much smaller than expected. Regardless, you rip into it and there it is, a tiny piece of cheap plastic. You’ve been duped.

A child’s first lesson in disappointment and heartbreak.

As nostalgia often goes, we now look back on these gimmicky objects with fond remembrance; they are now a part of our cherished childhood. Out of the many hundreds of different objects offered in comic book mail order ads over the years, we have selected our picks of the ten best.

The heyday of comic book mail order ads lasted from the 1950s to the 1980s. While most people saw these items as rip-offs, gimmicks, and junk, others now look back fondly on them. Many of these amusements and gizmos are now highly collected by baby boomers.

And be sure to check out the full list of kitschy comic book novelties below!

These glasses held so much promise. Imagine, the ability to see through skin and, yes, even clothing. And the object of your focus would be none the wiser! Many a kid fell for these cheap glasses that merely produced a simple optical illusion.

The picture in the ad showed fascinating creatures with human-like features frolicking in the sea. In reality, they were brine shrimp. You put them in a jar of water, watched them hatch and grow, but they looked nothing like the illustration in the ad.

Charles Atlas sold young readers on his “Dynamic Tension” program from the early days of comic book advertising. The ads hit at the heart of any insecure teen boy’s fears. “And to think they used to call me SKINNY!” Bullies would not be able to kick sand in your face any longer. The Charles Atlas program would change anyone into a hulking strongman.

This mechanical bank was actually pretty cool. When a penny is placed on the coffin, a skeletal hand raises up and drags the penny into the bank. These cheaply made banks are sought by collectors.

The martial arts were big in the 1970s, thanks to the popularity of the TV series Kung Fu (starring David Carradine) and Bruce Lee movies. Comic books from the era featured ads with the image of Count Dante striking a menacing pose, grabbing the attention of young comic book readers. If kids were feeling picked-on at school, they could learn the “World’s Deadliest Fighting Secrets” and take back the power… for FREE!

This was the classic hoodwink deal. The comic book ad promised a menagerie of fighting men and objects of war, all contained in a giant footlocker. And for only $1.75! Or so it seemed… What you really got was a small plastic box with a bunch of flat plastic “soldiers” that mostly didn’t stand up on their own.

The flat, pink rubber cushion worked exactly as promised. Many a kid pranked their buddies, parents and even grandma with this one. Blow a little air into it, surreptitiously slip it between the couch cushions, and hilarity ensues!

You may also enjoy Paul Bunyan Facts and FAQs

Pranksters could not resist the Snapping Gum gag. It held too much potential for mischief and mayhem. And if your victim didn’t look too closely, it looked somewhat like a real pack of gum. Kind of. Oh, and it did sting your finger with a spring-loaded wire if you took out the gum.

One of the most famous gag items is the Atomic Joy Buzzer. The small metal buzzer just needed to be wound up and kept hidden in your hand. Then just find someone to trick. Any unsuspecting chump would do. Shake their hand and the button releases the tightened innerspring, creating a vibrating effect on your victim.

A common theme in the 1970s comic books was hypnosis. The not-so-subtle implication was you could gain greater control over the opposite sex. Right! The Hypno-Coin was just a small disk with swirly lines. Flash this baby in front of anyone and have them obeying your commands in no time flat! Only $1.00 postpaid!

Would-be magicians only had to reach as far as their comic book to find all kinds of tricks and routines.

A staple of comic book mail order ads was the gag item. Pranksters finally had an endless supply of material to test out on friends, siblings, and classmates. 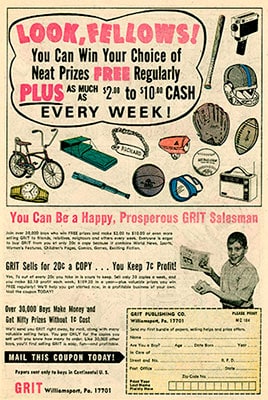 Almost every comic book in the 1970’s had ads recruiting boys to sell Grit Newspapers in their hometowns to earn a little money. Grit called itself “America’s Greatest Family Newspaper.”

Yes, live animals could be purchased by mail order back in the day. In retrospect, probably not a good idea for anyone involved, especially the animal.

Simple gadgets and novelties were the most common type of offering in comic book mail order ads.

Many different companies sold products via comic book mail order ads. These are just a few of them:

SOMETHING FOR NOTHING (or next to nothing!):

Then there were the “too good to be true” items. A lunar module for 10¢? Now that’s value!

There you have it—a return trip to the ’70s by way of wacky comic book mail order ads. We hope they put a smile on your face and brought back fond memories!

Or check out this list of 15 Weird, Wacky President Nicknames.