Funny body part names are not something you might think of every day. Your average person could probably only identify one or two of these parts of the body correctly. But, after reading this, you’ll know so much more. Be humble. Don’t flaunt your knowledge over your less-educated friends.

These funny body part names are strange and unfamiliar

We all know science and medicine speak their own language when it comes to naming things. Most of the terms originate from Latin or Greek but are not used in everyday language. Here’s a list of body parts with odd, unusual, and funny technical names. So next time you go to the doctor, you’ll be able to speak the same language of medical terms.

Get to know these funny body part names

You know that spot on your back you can’t reach to scratch? Grab a back scratcher and go to town on your acnestis, otherwise known as the spot between your shoulder blades. From the Greek aknestis (spine) and knestos (scratch). 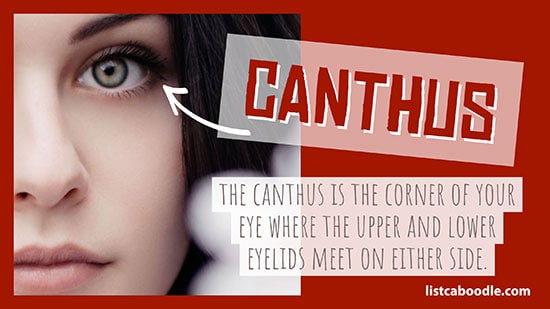 The sandman is very familiar with your canthus (plural canthi). It is the corner of your eye where the upper and lower eyelids meet on either side.

A funny name for your tailbone. Not so funny when its bruised or broken. Named after the Greek term for “cuckoo” because it resembles the beak of the cuckoo bird. (Note: this is one of the funny body part names that folks might actually know.)

The literal meaning is “little column”. This “column” is the skin and cartilage that separates the nostrils.

A hinge joint — like the elbow or knee — that allows motion in one plane only. Very helpful for karate chops and field goals.

A French supermodel? Nope. Its the smooth area between the eyebrows and above the nose. Often a site for wrinkle reduction injections.

A gowpen is a handful. Literally. It is the space created by cupping both hands and holding them together as if holding water. Used as a unit of measure for grains in olden times. The human body and its parts served many purposes. 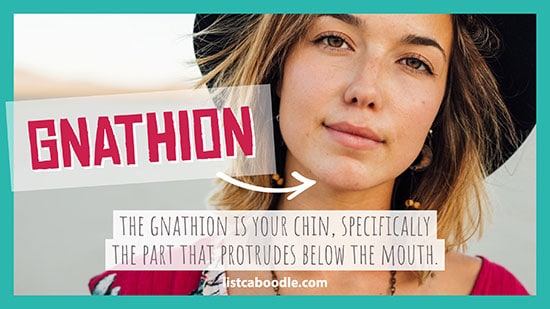 The gnathion is your chin, specifically the part that protrudes below the mouth. From the Greek word “gnath” which means jaw. It sounds like a term from the 19th century.

The hallux is a Latin-based name for your big toe. A bunion is a common malady of the toe.

The white crescent-shaped area at the base of your fingernail is called the lanula. The word’s origin is from Latin for “little moon”.

The minimus is on the opposite side of the hallux (see above). It is your little toe!

Niddick is quite simply the nape of the neck.

The kneecap’s technical name is the patella.

The ancient Greek meaning of philtrum is “love charm”. It is the cleft area or vertical groove between the nose and upper lip.

Beneath the purlicue (see above) is the rasceta, the wrinkled skin at the base of the hand. It can also be described as the inside of the wrist.

Maybe the funniest of all the parts in this list is the uvula. It is the fleshy lobe hanging at the back of your mouth just above the throat. It looks like a tiny boxing bag!

This is just a sampling of the funny names science has given common body parts. Use them to quiz your friends and impress your doctor on your next visit. You’ll be the next Cliff Clavin!