Baseball Nicknames: The Best, Strangest And Most Colorful Of All Time

Get a bunch of guys together and have them play nine innings of baseball—and what are you going to hear? Razzing and name calling, of course. Some of the names end up sticking over time, and we are left with classic baseball nicknames.

Here is a list of the best, strangest and most colorful major league baseball nicknames of all time. The top three names (in our opinion!) are given for each category. Check out the honorable mention lists in each category for even more wacky names.

Choose your own favorite or let us know if you have any great suggestions. Enjoy! 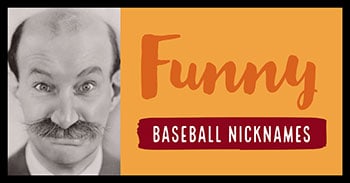 Charlie Wilson was a shortstop for Boston and St Louis in the early 1930s. Early in his career Charlie pulled a prank that would change his name forever. He decided to flood the ball field one day because he didn’t feel like practicing. The stunt was immortalized in the classic movie Bull Durham.

Allyn Stout was a pitcher for four major league teams over his career. His Cardinals team of 1931 won the World Series, although he did not play. He was part of a trade for HOF Leo Durocher to STL Cardinals. While fishing in Florida, Stout took a large saltwater fishing plug with three treble hooks in the forehead. Ouch.

According to The Dickson Baseball Dictionary (Third Edition), “A curveball with a sharp break or broad arc that bends like the handle of a jug” is called a jughandle. Jughandle Johnny Morrison had a wicked breaking ball during his playing days with the Pittsburgh Pirates in the 1920s. 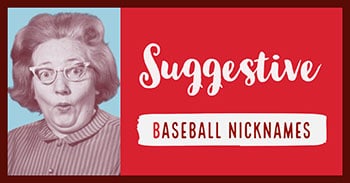 Not sure what it means, but it makes me slightly uncomfortable

Hall of Famer Randy Johnson stood 6’ 10” tall and brought the heat with his fastball. Need we say more?

Harry Schafer played for the Boston Red Stockings. No one seems to know why he was called Silk Stockings. To confuse things even more, his teammates prefered to call him Dexter.

We’re not sure how Alex Malloy earned his descriptive nickname. It may have simply been a simple contraction of his first name. Or perhaps he was constantly licking his pitching fingers to get more movement on the ball. Either way, Lick finished his career with a 0-6 lifetime record from one season in 1910. 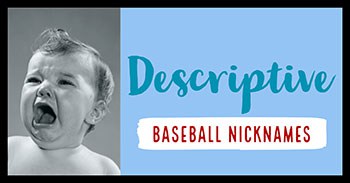 Ernie Lombardi was a big man with large hands. He could hold seven baseballs in one hand. His large nose earned him the nickname of the Schnozz from fans. He was good natured about the razzing, often making fun of himself.

Bill Lee was the Spaceman—the counter-culture, off-speed throwing reliever for the Red Sox and Expos. They said he could jog each day to Fenway Park without being affected by traffic fumes because of his marijuana use.

Apparently Jim Shaw grunted so hard while pitching you could hear him all the way up in the grandstand. He played seven seasons with the Washington Senators. 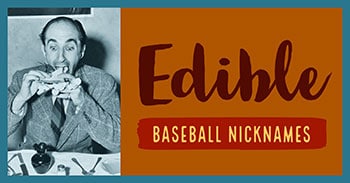 Willie Jones most likely got his nickname from a song. In the early 1930s a popular tune on the radio was Puddin’ Head Jones. The lyrics told of a slow-witted chap who was down on his luck:

Oh, Puddin’ head Jones was fat and funny
Dumber than sticks and stones
Now that is just why the kids all called him
Woodenhead, Puddin’ Head Jones

Willie on the other had did just fine. He was an important member of the 1950 Phillies “Whiz Kids” National League champions.

George Gerken played in only 44 games over two seasons in the late 1920s. His surname made for easy pickings to his teammates. Pun intended.

It only makes sense that John Candelaria would be called the Candy Man. 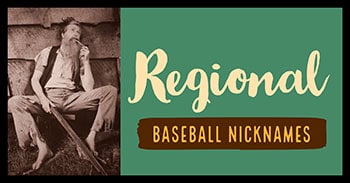 Where’d ya say yer from?

1. The Wild Elk of the Wasatch

Ed Heusser was from the western edge of the Rocky Mountains in Utah, otherwise known as the Wasatch Range. Whether he was a wild elk is unknown. He was the NL ERA champion in 1944 for Cincinnati.

2. The Earl of Snohomish

The bespecticaled Earl Torgeson was a fiesty infielder from Snohomish, Washington. He wouldn’t hestitate to get in a tussle with the opposing team, but he would always remove his glasses first.

Yankees announcer Mel Allen, known as “The Voice of the Yankees,” gave Spec Shea his nickname. Shea was from Naugatuck, Connecticut. 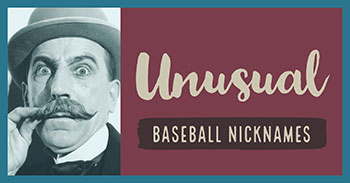 Bill Rodgers was a believer in the power of raw meat. He ate raw meat for better power at the plate and encouraged his teammates to do the same. His unremarkable baseball career only lasted a few years, but he lived to the ripe old age of 91.

Yankee’s pitcher Lefty Gomez said of Charlie Gehringer, “you wind him up on opening day and then forget him.” Thus was born The Mechanical Man. The second baseman played a total of 19 seasons for the Detroit Tigers.

3. The Freshest Man on Earth

Arlie Latham was a star player for the St Louis Browns in the 1880s. But he was better-known for his antics and pranks with teammates. He would somersault to avoid being tagged. He would light firecrackers in the clubhouse. A common term from that era, “fresh” was often used to mean “wise guy” or “cheeky.” 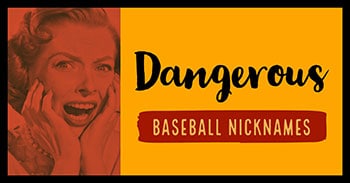 Monte Irvin was a star of the Negro Leagues and Major Leagues. So lethal was his bat, they called him Mr. Murder. He is also a member of the Baseball Hall of Fame.

Baseball great Ted Williams called Johnny Pesky “The Needle.” Pesky had a long, thin nose that Ted thought was worthy of the moniker. He was also known as Mr. Red Sox.

Little is known of George Stutz, other than his 9 plate appearances for Philidelphia in 1926 and that he was called Satan. 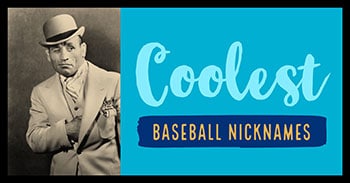 Rodney Scott is one cool dude. His teammate John Mayberry gave him the name Cool Breeze because of his unflappable outlook. Scott played for six different teams in the 1970s and 80s.

Minnesota Twin Frank Viola had a sweet circle change pitch and a name of a musical intrument. The name “Sweet Music” is attributed to a local sports writer and became Frankie’s moniker through his entire major league career.

Willie Mays is known as the best all-around player in baseball history. The origins of his nickname are not clear. One story is that when he first arrived in the minor leagues, he didn’t know anyone’s name so he would say “Hey man. Say hey, man” to get their attention. 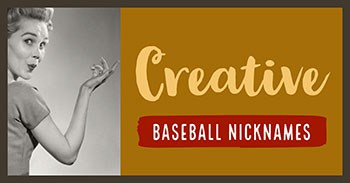 Red Lucas was a control pitcher and when he batted, he walked often. His creative nickname was given to him by Colonel Bob Newhall, a reporter for the Cincinnati Tribune.

Mike Hargrove drove opposing pitchers and managers crazy with his routine at each plate appearance. He would adjust his helmet. Then he would adjust his batting glove. Next he would pull down each sleeve. After that he would wipe his hands on his pants. Sometimes he’d repeat the whole process again before finally stepping into the batter’s box.

3. The Man Nobody Knows

Bill Dickey was an All Star catcher. His career lasted 17 years with the Yankees. But his low-key personality and aloofness made him the Man Nobody Knows. 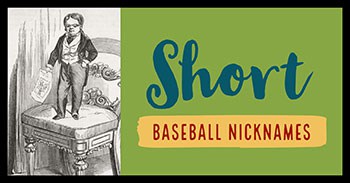 Short names are easy to yell

Hal Rice was Stan Musial’s backup in St Louis. He didn’t have much of a chance to shine.

Howie Krist had the look of a fresh-faced farm boy. His teammates called him Spud. The high point of his career was an undefeated season (10-0) for the Cardinals in 1941.

Frank Heifer only played in 11 games for the Boston Red Stockings in 1875. Typhoid struck down Heck at the early age of 39 years old.

Baseball has a rich tradition of colorful characters and even more colorful nicknames. This list of baseball nicknames exhibits some of the best. We hope you’ve enjoyed reading about these great names.

You may also enjoy reading this listcaboodle.com list of famous last words of notable celebrities.

Check out this list of 15 famous American flags through history or  15 weird and wacky president nicknames.

Be sure your next Super Bowl party is the best it can be!