In the 20s and 30s, Will Rogers was the man: The top box office draw, nationally syndicated columnist, and the most sought after live entertainer. Oh, and he also had a way with words.

These folksy Will Rogers quotes reflect a writer, humorist, and performer who played at the highest levels. His humor and philosophy on life continue to be relevant and find audiences today.

Born in the Cherokee Nation in Oklahoma, Rogers accomplished many things in his life. Parlaying roping tricks he learned ranching growing up into live performances on the Vaudeville circuit, Rogers began to grow an audience.

Will Rogers was a multimedia star. He published humor books, performed at live concerts, and wrote a nationally syndicated column. Rogers became a silent film star and the #1 box office attraction, a radio star, and was widely recognized as one of the most popular men in America.

He is perhaps best remembered for being a folksy humorist who caught the imagination and hearts of his audience with his common man approach. 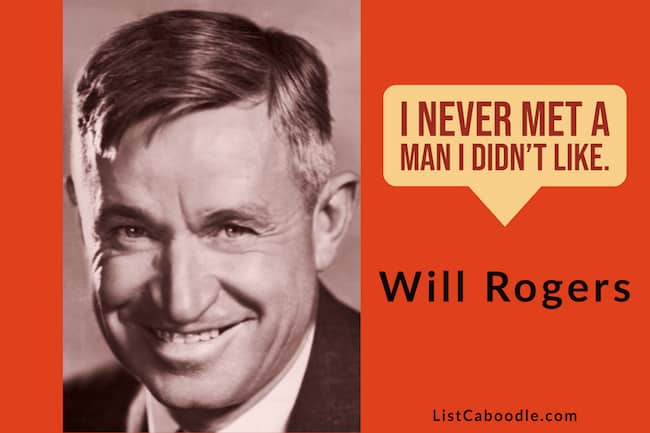 Here’s a man who performed on vaudeville stages, was a radio star, and wrote more than 4,000 nationally syndicated columns letting us know it’s always a good time to be quiet. Hmm… do what I say and not what I do? Well, it should be noted his acting was done in silent films.

2.) “Everybody is ignorant, only on different subjects.”

Will Rogers had the perspective of a man who had traveled around the world three times. Having been exposed to many cultures and various people, he had the good sense to know that folks had knowledge and strengths in a wide variety of subjects.

This quote is a shortening of Rogers’ planned epitaph. Here’s the complete quotation:

When I die, my epitaph, or whatever you call those signs on gravestones, is going to read: “I joked about every prominent man of my time, but I never met a man I dident (sic) like.” I am so proud of that, I can hardly wait to dies so it can be carved.

4.) “I don’t make jokes. I just watch the government and report the facts.”

This typically was Rogers’ opening for most of his live performances. America’s foremost humorist in the 1920s, Rogers published a book of his wisecracks and continued to publish a series of humor books. Here’s one of his famous lines on being funny.

A humorist entertains, and a lecturer annoys.

Rogers had a way of making his observational humor folksy and relatable. And, we can all relate to having a few lapses of judgment in our lives.

Will Rogers believed in the American Dream, upward mobility, and the thought that hard work could pay off. He, himself, was a tireless worker. To become the #1 draw at the movie box office, the #1 most read newspaper columnist, and the #1 public speaker doesn’t happen from sitting too long in one place.

7.) “Never let yesterday use up too much of today.”

Will Rogers grew up on a big frontier ranch near Oologah, Oklahoma. He was born a Cherokee citizen in the Cherokee Nation, Indian Territory. He had a deep appreciation of his family and his community. Here, he learned his work ethic and nurtured his sense of humor.

Check out this video of Rogers performing on radio.

Based on all of Rogers’ activities in films, writing, travel, and giving speeches, one might imagine his life to be pretty hectic. He seemed to thrive on its chaoticness and encouraged folks to follow a similar approach in their lives.

Growing up a Native American, you’d think it would be pretty easy for Rogers to have a skeptical viewpoint of those involved in legal affairs. But, this line suggests an opportunistic approach.

10.) “Golf is good for your soul. You get so mad at yourself you forget to hate your enemies.”

Will Rogers’ wit and humor could draw a crowd. Why was he so successful? He could relate to the common man and put his jokes in easily understood terms.

11.) “Worrying is like paying on a debt that may never come due.”

Well, Rogers didn’t have to worry too much about his career which kept growing by leaps and bounds. In addition to conquering silent films, he also set his sights on radio, at the time the hot, new medium. He became a star on the radio with The Gulf Headliners.

12.) “Everything is funny as long as it is happening to someone else.”

Rogers was the youngest of eight children and was raised in a loving and wealthy family. Rogers was the quintessential cowboy philosopher, a wide-eyed country boy amazed at the shenanigans of the modern world filled with dishonest politicians.

13.) “So live that you would not mind selling your pet parrot to the town people.”

I think it’s probably fair to say that Roger was one of the best-loved performers of his day. So, he probably followed this saying pretty well.

14.) “The income tax has made more liars out of the American people than golf has.”

Part of Rogers’ appeal was that he picked subjects that most Americans could agree on. I mean, really, who doesn’t believe that more than a few folks fib on their income taxes.

15.) “Things will get better — despite our efforts to improve them.”

16.) “If you find yourself in a hole, the first thing to do is stop digging.”

Rogers’s comedic style did not make the targets of his jokes victims. Rather, they joined him in the laughs. His good-naturedness won over audiences.

17.) “I like to hear a man talk about himself because then I never hear anything but good.”

Rogers was a Democrat but was known to support presidents from both parties. He thought all campaigning was bunk, and to set about proving this, he decided to mount his own campaign for president in 1928. The only medium he used was the pages of Life Magazine. His campaign promise: “If elected, I will resign.” Another great political quote of his:

I belong to no organized party. I am a Democrat.

18.) “Diplomacy is the art of saying, ‘Nice Doggie,’ until you can find a rock.” (Editor’s favorite Will Rogers quotes selection)

You gotta love this sentiment. Will Rogers at his best!

19.) “The only time people dislike gossip is when you gossip about them.”

Having been raised in a close community, Rogers had a deep understanding of the everyday goings-on that made up living in rural America. Then, with his extensive travels, he gained an ever wider perspective.

20.) “We can’t all be heroes because somebody has to sit on the curb and clap as they go by.”

Will Rogers was a hero to many. He did many benefit concerts to raise money during the depression and for various non-profit causes.

21.) “See what will happen if you don’t stop biting your fingernails?” (To his niece on seeing the Venus de Milo)

Rogers’ ability to improvise was honed from his days on stage. He truly became the voice of the common man. Rogers was born in 1879 and died in an airplane crash in 1935 at the age of 55 years old. Part Indian, part cowboy, and 100% American — Will Rogers packed a lot of living into 55 years!

Note: If you have any favorite Will Rogers quotes, please let us know via the contact page.

Mike is an author and co-founder of ListCaboodle.

You’re on the Best Will Rogers Quotes and Sayings page.