Billie Eilish has a unique voice that is regarded as the future of pop music by many in the music industry and her musical style defies categorization. With dark, intense lyrics, she often sings moody songs about serial killers, depression and even monsters under the bed.

Her hit songs include “lovely”, “when the party’s over” and “bury a friend.” She has more than 17 million followers and 52 million monthly listeners on Spotify alone. On Instagram, her followers number over 45 million and growing.

Let’s find out more about the musical superstar by answering these frequently asked questions. 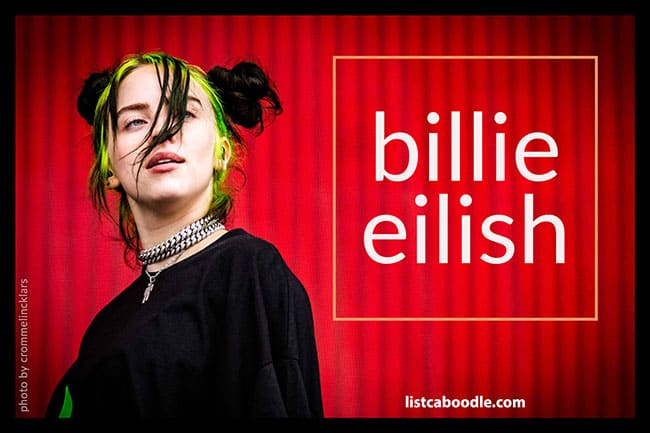 1.) What is Billie Eilish’s real name?

2.) How did Billie Eilish get her name?

Billie’s parents, Maggie Baird and Patrick O’Connell, initially wanted to name their new baby girl “Eilish.” The idea came from a documentary they had seen about the conjoined Irish twins Katie and Eilish Holton.

Their plan changed when Maggie’s father Bill died during her pregnancy. The couple decided to name their daughter Billie as a tribute to her grandfather.

Billie Eilish’s middle name, Pirate, came from her brother Finneas, who was four years old when she was born.

The enigmatic singer-songwriter was born on December 18, 2001, and grew up in the Highland Park neighborhood of Los Angeles, California. She still lives in the family home where she grew up.

4.) When is Billie’s birthday?

Her birthday is on December 18th.

She turned 19 years old in 2020. She celebrated her golden birthday by releasing a throwback video montage on Instagram.

She was born on December 18, which makes her a Sagittarius.

7.) How tall is Billie Eilish?

Her height is actually quite short. She stands only 5’ 3” tall.

8.) Where does Billie Eilish live?

She still lives in the modest family home of her childhood in Los Angeles along with her parents. Her brother Finneas moved out of the house in 2019.

Billie is a life-long animal lover and loves to ride horses. She said in an interview once, “Horses are one of the only things that bring me peace.”

10.) Billie Eilish is a lifelong vegetarian and has been a vegan since 2014

She grew up never eating meat.

11.) What is Billie Eilish’s favorite color?

Her favorite color is black.

Here is what she said about her favorite color: “Black is the only time I can go through the airport and be fine. But if I’m wearing a black beanie, and a black shirt, and some black pants, and some black shoes, I’m pretty good.”

She likes the movie Fruitvale Station from 2013. It’s about a real-life shooting of a black teen by an Oakland transit police officer in 2009.

She loves the show so much, she even sampled audio from the episode “Threat Level Midnight” for her song “my strange addiction.”

14.) When did she begin writing songs?

Billie has been writing songs since she was 11 years old. She developed her singing skills as a member of the Los Angeles Children’s Choir.

15.) What style is Billie Eilish’s music?