Can you identify the popular television show by a description of the opening sequence?

Let me start by giving you the origin of the “Do You Know Your TV Show Openings” quiz.

My cousin Boris comes from the old country but is staying with me for a few weeks before heading to Los Angeles. Boris is still working on his English, so I suggested he watch some American TV shows to brush up and expand his vocabulary.

Religiously, he watches several shows each day, and believe it or not, his English has improved a great deal. When I come home, he tries to explain to me which shows he watched by describing the opening scenes.

For example, when he described a show as, “Six beautiful people bathing in an outdoor fountain,” I knew immediately that Boris was referring to “Friends.”  I should note that Boris isn’t very good with names.

See if you can solve these other Boris clues to identify the popular TV shows from their openings. 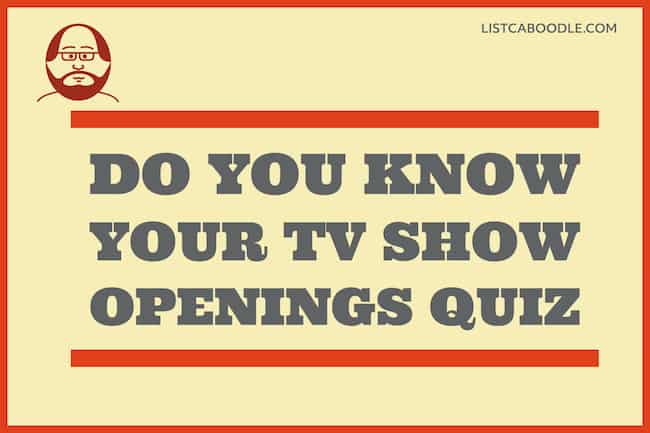 Try answering all the questions before scrolling down to the answer key.

1.) A father and young son are walking to the lake to go fishing. (What TV show am I?)

2.) It’s like you’re in a space ship with stars and planets zipping by. Then, there is a series of quick cuts that show progress on our planet from dinosaurs to the pyramids to airplanes.

3.) A silhouetted man in an illustrated office proceeds to fall from a skyscraper, but then it jumps to him sitting on a couch smoking a cigarette.

4.) Periodic elements are shown in a collage followed by the Periodic Table chart, and then a close up of Bromine and Barium followed by smoke.

5.) It looks like a family Zoom video conference call.

6.) A mosquito biting an arm before getting killed… closeup of a man shaving and then a porkchop being cooked and eaten.

7.) Cartoon of fireworks and a big moon rises. Then, a series of moons with the actors’ names in them.

8.) A small train carrying wood is shown followed by three girls bathing in a water tower. That’s followed by an old man sleeping on a porch.

10.) A man in a doctor scrub suit lifts sheet from the body on table and two of the people standing around the table look like they’re going to throw up immediately.

12.) A telephone rings and a man answers with, “Hello.” Then, while in a trench coat, he walks through a city, over a bridge, and then takes a train home to his big apartment where his wife is waiting.

13.) Two army helicopters coming into land, an army ambulance driving, and lots of people are running.

14.) A car driving on the New Jersey Turnpike. The driver is smoking a cigar.

16.) It starts showing a field of corn as a bird flies, then the screen is split into three showing scenes from Americana ending with footage of City Hall.

17.) An elaborate mechanical map is shown in an overly long intro.

18.) A series of snapshots of five people – two girls and three guys. One guy is always wearing a tie.

19.) A hodgepodge of shots including a jukebox, a 45 record spinning, high school boys in letter jackets, and a sock hop.

20.) A man is hunting with his dog but his first shot hits the ground.

Frank Lloyd Wright once said, “Television is chewing gum for the eyes.” Well, you’re a master chewer. Well done! Boris would like to invite you to dinner.

In the vast wasteland that is television, you’re a “B” student.

Can we assume you were yarning a sock or doing something else while watching?

Maybe quizzes are not your thing.

Boris and I thank you for playing along.

You’re on the Do you Know Your TV Show Openings Quiz page.