This collection of famous women riddles will teach you about some of the accomplishments of notable women from history. From days gone by to modern times, learn about women who made a difference.

These riddles are great for impromptu trivia games on long car drives, dinner time discussions, and for teacher looking to put to good use a few extra minutes of time.

We hope you enjoy and learn something along the way. When you’re finished, tally up all of your correct answers out of the 27 questions and see your grade.

1.) At the age of 18 years old, I led the French army to victory over the English at Orleans. Some 500 years after my death I was canonized as a saint by the Catholic church. Mark Twain considered me “the most interesting human being the world has ever known.” Who am I?

2.) I went from being on government assistance to becoming the richest woman in Great Britain. You could say my experience was “magical.” Who am I?

3.) I am the first female to fly alone across the Atlantic Ocean. I mysteriously disappeared in 1937 while on a flight. Who am I

Riddles About Notable Women in History

4.) I am noted for my artistic skills and for starting rather late in life. You see I began painting at the age of 78 years old. Who am I?

5.) Born a slave, I escaped to the north. But I returned 13 times to free other slaves using a series of safe houses known as the Underground Railroad. Who am I?

6.) I studied chimpanzees for nearly 60 years. My research provided groundbreaking research into humans’ closest relatives. Who am I?

Take the Know Your Idioms Challenge.

7.) I’m a mathematician who was portrayed in the movie HIdden Figures. I was one of the brains behind the complex calculations that enabled the U.S. to fly into space.

8.) I was married to the 44th President of the United States and am the author of the bestselling book Becoming. Who am I?

9.) I was the first woman selected for the United States Supreme court. Who am I?

10.) Don’t flip out but I’ve won the all-around title in gymnastics six times and I have two gymnastic skills named after me. Who am I?

11.) I’ve won over 22 tennis grand slam titles. My sister Venus is also one of the all-time tennis greats. Who am I?

12.) I get my kicks playing soccer. I was named the Best FIFA Women’s player in 2019 and won a gold medal leading my USA team. I’m also an advocate for many LGBT organizations. Who am I?

15.) I was a Golden Age actress noted for my beauty. But, listen up, I co-invented a radio signaling device that changed radio frequencies to confuse the enemies. Who am I?

16.) I worked my way up from reporter to being the first black female billionaire. Who am I?

17.) I grew up in Houston, Texas. My record sales have exceeded 100 million. My husband Jay-Z is no slouch on record sales either having sold over 50 million. Who am I?

18.) I am the first woman to win two Nobel Prizes — one in physics and one in chemistry. My efforts, along with my husband’s Pierre’s, led to the discovery of radium and I coined the term “radioactivity.” I was also the first female professor at the University of Paris. Who am I?

19.) I assumed my prestigious position in 1952 and am the first British monarch to celebrate a Sapphire Jubilee. Who am I?

20.) Born in Alabama, I am an author, political activist and lecturer. I wrote 12 books, graduated from college, and visited 35 countries. The post office even issued a stamp honoring me and my teacher, Anne Sullivan. And, I did all of these things while not being able to see or hear. Who am I?

21.) Despite suffering from polio as a child, I went on to Olympic fame winning three gold medals in 1960 in Rome. I became the fastest woman runner in the world. Who am I?

22.) I am the first 20th Century female publisher of a major American newspaper. I played a pivotal role in covering the Watergate Scandal. My book Personal History won a Pulitzer Prize. Who am I?

23.) I am the first wife of Charles, the Prince of Wales, and the mother of Prince William and Harry. Somewhat of a media darling, I was known for my charity work, especially with AIDS patients. Who am I?

24.) I’m an English author who wrote six books. You may have heard of Sense and Sensibility or Pride and Prejudice. I’m on the ten pound note, a “tenner” in England. Who am I? 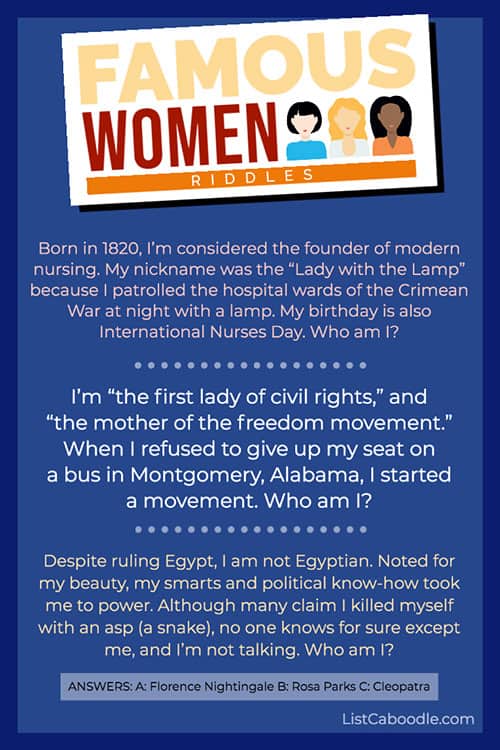 25.) Born in 1820, I’m considered the founder of modern nursing. My nickname was the “Lady with the Lamp” because I patrolled the hospital wards of the Crimean War at night with a lamp. My birthday is also International Nurses Day. Who am I?

26.) I’m “the first lady of civil rights,” and “the mother of the freedom movement.” When I refused to give up my seat on a bus in Montgomery, Alabama, I started a movement. Who am I?

27.) Despite ruling Egypt, I am not Egyptian. Noted for my beauty, my smarts and political know-how took me to power. Although many claim I killed myself with an asp (a snake), no one knows for sure except me, and I’m not talking. Who am I?

Add up all of your correct answers from the 27 Famous Women Riddles. This is a tough quiz. Here are the grades:

17 – 21: Well done… keep studying and in no time you’ll be getting them all correct.

< 10: Remember, everyone was once a beginner. Keep studying.

Greg and Mike are the co-founders of ListCaboodle.

Do You Know Your TV Openings Quiz