Get to know Greta Thunberg: All the answers to the most frequently asked questions about the young activist.

Due to her climate change activism, Greta Thunberg rose to fame in 2019. The blunt-speaking activist has been tackling one of the greatest, yet too often ignored issues of our time – the climate change crisis.

Thunberg has gained many accolades. It has also placed her on the front line of a serious issue that people have differing opinions on. Thunberg received criticism by conservative factions in the U.S., and even by the President of the United States.

Here’s a look into the “Next Generation Leader”,  as named by Time Magazine.

Who is Greta Thunberg?

She is a young girl who is striving for and actively campaigning for social changes to help tackle climate change.

What is her full name?

How to pronounce Greta Thunberg? 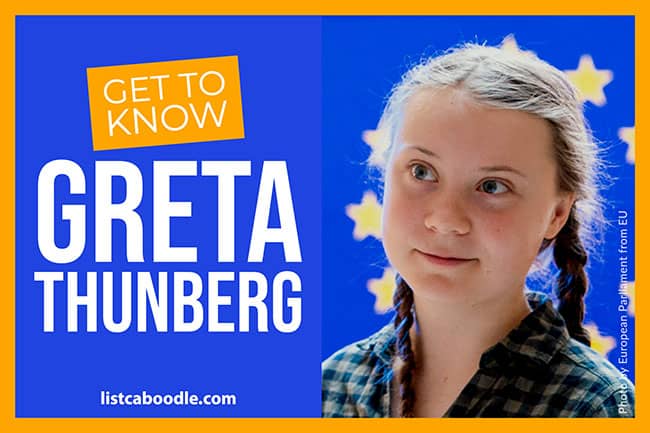 When was Greta Thunberg born?

Age:  How old is Greta Thunberg?

What is her ethnicity?

Greta Thunberg height: How tall is she?

Where does Greta Thunberg live?

She lives in Stockholm, Sweden – her birthplace.

Who are Greta Thunberg’s parents and family?

Thunberg’s parents were not supportive of her at first as they believed that it wasn’t safe for their daughter and her future to be at the forefront of something as critical as climate change. However, they eventually did support her as it was important to them that she was making a stand. Her initial attempts to convince her parents to change their lifestyles weren’t successful. She even showed them graphs and statistics for evidence as to why they should stop flying, go vegan, and become more environmentally alert. They took up the environmentally careful lifestyle later in support of her.

Yes, Greta Thunberg is vegan. Thunberg isn’t just herself a vegan but also persuades others around her to take up the vegan diet. Her father is now 100% a vegan while her mother is 90% through the way towards it.

Does Greta Thunberg have autism?

After her experience with learning about climate change when she was about 8 years old, she had struggled with depression. Soon afterward, a diagnosis of Asperger’s syndrome, obsessive-compulsive disorder (OCD) and selective mutism was determined.

The news was made public in 2015 by her mother. While acknowledging that her situation has limited her in certain areas before, Thunberg no longer views it as a limitation. She interprets it as a “superpower”, as it only means that she speaks what she thinks is essential.

What Greta Thunberg is known for

Why is she famous?

Greta is famous for her intense speeches that curtly addresses issues such as global warming and climate change, which directly ask for recognition and immediate attention from world leaders and decision-makers. Thunberg is also known for her sustained campaigning for her cause, which has been conducted at a young age. Moreover, she gained high recognition in 2019 when she was joined by people all over the world campaigning for her cause.

Multi-city protests were observed by millions of students all around the globe. Greta was also featured in a Vice documentary called “Make the World Greta Again” which further made people aware of her and her actions.

Why did she become an activist?

In 2011, she became informed about climate change for the first time after she read about it. She found it very disappointing that so little is being done about it, and the lack of urgency by most people around the world. The subject made her depressed and she stopped eating and talking because of it. As a result, she lost 10 kg in two months.

In May 2018, she said in an essay for a newspaper that she wants to feel safe and that she is unable to do that knowing that we are in the greatest crisis in human history. Her 2018 protests started after the heat waves and wildfires during the hottest summer of Sweden in at least 262 years.

How did she start being an activist?

In August 2018, she started spending her school days outside the Swedish Parliament to garner attention and action for global warming by holding up a sign that said: “School Strike for the Climate” in Swedish. From thereon, other students joined her by engaging in protests of similar fashion in their own communities. This resulted in the inception of Fridays for Future, a school climate strike movement. After she addressed the 2018 United Nations Climate Change Conference, student strikes took place everywhere in at least some parts of the world.

What has Greta Thunberg accomplished?

After becoming aware of the seriousness of climate change and global warming, Greta first took action in order to change things in her own home. She convinced her family to reduce their carbon footprint and decrease their overall impact on the climate by becoming vegan, giving up flying and upcycling.

Thunberg got the idea for the school strikes after the school shootings in America in 2018 after which students refused to go to school. She also contributed a voiceover to a song by the band The 1975 for a song of the same name. Thunberg is heard saying “So, everyone out there, it is now time for civil disobedience. It is time to rebel.” The proceeds for it will be going to the Extinction Rebellion at her request.

Greta Thunberg in the Americas

How did she get to the US?

Thunberg sailed across the Atlantic Ocean from Plymouth, England, to New York, USA in a 60-foot racing yacht that was equipped with underwater turbines and solar panels. The yacht carried a sail marked “Fridays For Future”. As a display of her beliefs and ideals, the trip was announced as a transatlantic crossing that was carbon neutral. The sailing voyage lasted from August 14th to August 28th of 2019, a total of 15 days.

Did she sail alone?

She was sailed to the US by German yachtsman Boris Herrmann.

What was she doing in New York and the Americas?

Thunberg attended the 2019 UN Climate Action Summit in New York City. In September 2019, Thunberg announced that she, along with 15 other students, had made an official complaint against the five nations that are not on track according to their commitment in the Paris Agreement Pledges to meet their emission reduction targets. The nations are Argentina, Brazil, Germany, France, and Turkey. The challenge was gainst the Third Optional Protocol to the Convention on the Rights of the Child.

That same month she led a climate rally which was part of the Global Climate Strike in Montreal. People took part in the protest in numbers of hundreds and thousands. She also took part in protests in Edmonton and Vancouver while in Canada.

How did Greta Thunberg return home?

She returned home on the 48 – foot catamaran La Vagabond along with her father, Bloggers Elayna Carausu, yachtsman Nikki Henderson and Riley Whitelum and their baby. They arrived in Lisbon in December. She went to Madrid from there and called for more solid action.

Critics ask how she manages to travel across the world at such a young age. The questions aren’t uncalled for as it’s natural for people to be curious about a 17-year-old traveling around the world for campaigns. However, Greta released a statement on Facebook that she does not have any external sources funding her journeys and that it is her parents who pay for her tickets and accommodations.

Does she go to school?

Thunberg protested by skipping school regularly until the elections after which she only skipped on Fridays. Her protests have not come in the way of her studies but it has limited her free time. Her teachers are supportive of her as human beings, however, like her teachers, they disapprove of her skipping her school days.

Who is behind her?

She has stated that no people forcing her to do what she does or profiting from her actions. She is not controlled, manipulated or otherwise influenced by others for her cause. There are no ulterior motives and she claims that her cause and goals come from within her own purpose.

Does she get paid?

She gains no profits, doesn’t get paid by anyone, or has had any future promises of payment made for her activities per Thunberg. Her book’s profits go to charity.

Some people do not agree with her viewpoints. Some baby boomers may not appreciate her accusing tone in her speeches. She points out that young people’s futures are in jeopardy due to the lack of attention from people of power. They also think her views are too idealistic.

After delivering her speech in September in front of the UN, President Trump arrived in the same lobby. Footage of her showing her glaring at him pointedly went viral. Cause for the glare could be Trump announcing the US stepping back from the Paris agreement.

Trump tweeted saying, “She seems like a very happy young girl looking forward to a bright and wonderful future. So nice to see!” Thunberg responded by changing her Twitter bio to the statement in the tweet. This fashion of exchange has been seen time to time on Twitter between them, with most recently Trump tweeting, “So ridiculous. Greta must work on her anger management problem, then go to a good old fashioned movie with a friend! Chill Greta, chill!”

Thunberg responded as before by putting up a bio quoting the president, “A teenager working on her anger management problem. Currently chilling and watching a good old fashioned movie with a friend.”

How to support Greta Thunberg

Participate in Fridays for Future

Holding your own Fridays for Future demonstrations is a way you can support her.

Environmental Defense Clubs, Sierra Club, and Trust for Public Land are some of the organizations that you can support.

Greta Thunberg is on 17. As she is on the front line of this whole situation putting jer under the eyes of the whole world, messages of support can mean a lot when it comes to continuing doing what she does.

Write to the UN

Writing to the secretary-general of the United Nations is another way to provide support as raising our voices will add more value to the cause.