There's something about Harry — learn more about the British songwriter, singer, and actor.

Harry Styles is an English songwriter, performer, singer, and actor who shot to fame in the group One Direction. His debut solo single, “Sign of the Times,” was selected by Rolling Stones magazine as Song of the Year. Harry is also known for his acting. He starred in the 2017 hit movie, “Dunkirk.”

1.) I can see how you could get dragged into the bad stuff, but I’ve got good friends around me, good family. I think I’ve got my head screwed on.

2.) A lot of the time, the way it’s portrayed is that I only see women in a sexual way. But I grew up with just my mum and sister, so I respect women a lot.

3.) You get moments all the time that kind of make you pinch yourself, some of them make you quite emotional. Winning a BRIT was a big moment because we were just so excited to be at the awards in the first place. Selling out Madison Square Garden was pretty amazing too. Then we woke to the news that our U.K. tour was sold out. It was crazy.

4.) I’m quite old-fashioned. I like going out to dinner. You have the chance to talk to somebody and get to know them better.

5.) I don’t want to be viewed as a womanizer or whatever. I don’t like going crazy, I like having fun, but it’s nice to wake up in your own bed, isn’t it?

6.) That [LGBTQ, race, and gender rights] doesn’t feel like politics to me. I think stuff like equality feels much more fundamental. I feel like everyone is equal. 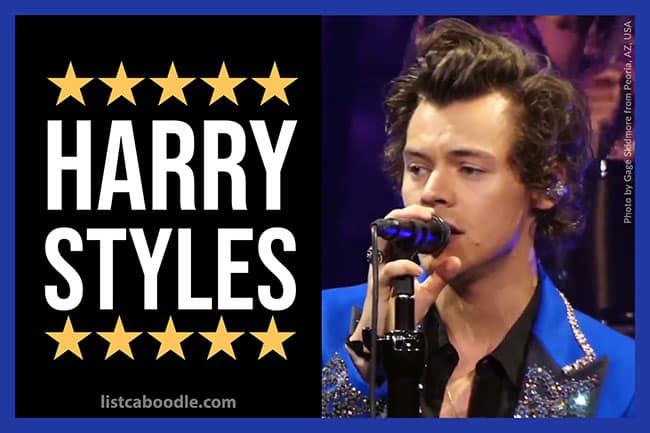 7.) He’s a legend. He’s incredible. David Bowie can do no wrong.

8.) Who’s to say that young girls who like pop music – short for popular, right… have worse musical taste than a 30-year-old hipster guy. That’s not up to you to say. Music is something that’s always changing. There are no goalposts. Young girls like the Beatles. You gonna tell me they’re not serious? How can you say young girls don’t get it? They’re our future – our future doctors, lawyers, mothers, presidents, they kind of keep the world going. Teenage-girl fans – they don’t lie. If they like you, they’re there. They don’t act ‘too cool.’ They like you, and they tell you which is sick.

9.) Being in a creative field, it’s important to be progressive. People doing stuff like that [expressing their sexuality] is great. It’s weird for me [explaining sexuality] – everyone should just be who they want to be. It’s tough to justify somebody having to answer to someone else about stuff like that. I’ve never felt the need to really [label his own sexuality]. No.

As of 2019, Harry Styles’ net worth is roughly $75 Million dollars, which he amassed through his singing, acting, and endorsements.

How old is Harry Styles?

Harry Edward Styles was born on February 1, 1994, in Evesham, Worcestershire, England, UK. As of February 2019, he is 25 years old. His birthstone is Amethyst. Amethyst is associated with spirituality, wisdom, sobriety, and security. His zodiac sign is Aquarius.

How tall is Harry Styles?

What is Harry Styles religion?

The singer is not religious. There were some debates about his religion, but his father, Des Styles, posted on Twitter: “Still lots of queries asking if H is some % Jewish?…categorically, he is 0% Jewish. Not at all.” On his page on Twitter, the singer asked his followers: “I’m Christened but not really that religious…is that ok?”

Harry’s sexual orientation is ambiguous. When asked if he is bisexual, Harry answered: “Bisexual? Me? I don’t think so. I’m pretty sure I’m not.”

Harry’s father is Desmond Styles, who worked in the finances, whereas his mother, Anne Twist, is a Philanthropist. She regularly interacts with One Direction fans through Twitter. She appeared on One Direction’s concert film. This Is Us, along with other family members of the band. His siblings include Harry Styles, Gemma Styles, and Amy Twist.

Harry Edward Styles was born on February 1, 1994, in Redditch, Worcestershire. He is the son of Anne Cox (née Selley) and Desmond “Des” Styles. Numerous of his precursors were farmworkers in Norfolk. Styles was raised in Holmes Chapel, Cheshire after his guardians moved there alongside his older sister, Gemma when he was a child. His first memory is of going to Disney World. He went to Holmes Chapel Comprehensive School.

Styles’ parents separated when he was seven, and his mother afterward was remarried to Robin Twist, who died of cancer in 2017. Styles’ family includes an older stepbrother named Mike and a stepsister named Amy, children of Twist. At 16 years of age, he worked part-time at the W. Mandeville Bakery in Holmes Chapel.

As a child, Styles cherished singing, covering tunes from Elvis Presley. While at Holmes Chapel Comprehensive, Styles was the lead artist for the band White Eskimo. The group won a local Battle of the Bands contest.

Styles has many nicknames, some of which include Hazza, Haz, Harold, Harrah, and H.

Tv shows he appeared in are iCarly, Happy Together, The Late Late Show with James Corden, Harry Styles at the BBC, and Saturday Night Live.

Dunkirk depicts the departure from three viewpoints: land, ocean, and air. It has little discourse, as Nolan sought instead to create suspense from cinematography and music. Shooting started in May 2016 in Dunkirk and finished that September in Los Angeles, when post-production started. Cinematographer Hoyte van Hoytema shot the film on IMAX 65 mm and 65 mm large-format film stock. Dunkirk has extensive commonsense effects and utilized thousands of extras as well as historic vessels from the evacuation, and period airplanes.

The film debuted on July 13, 2017, at Odeon Leicester Square in London and was released in the United Kingdom and the United States on July 21 in IMAX, 70 mm, and 35 mm film groups. It is the highest-grossing World War II film, making $526 million around the world. Dunkirk received laud for its screenplay, direction, melodic score, sound effects, and cinematography; a few critics called it Nolan’s best work, and one of the greatest war movies.

Some of the many songs by Harry Styles are Lights Up, Sign of the Times, Sweet Creature, Kiwi, From the Dining Table, Two Ghosts, Only Angel, Meet Me In The Hallway, Girl Crush, Ever Since New York, Woman, Carolina, You’re Still The One, Don’t Let Me Go, The Styles Of Harry, The Chain, Out Of His Comfort Zone, A Song For Someone, Wild Thoughts, Filming With Nolan And Corden, The Creative Process, Always Writing, An Englishman In Jamaica, and Tours And Endorsements.

Never coming back down

I could, but wouldn’t stay

The link for the official audio for the song “Fine Line” is below.

Fine Line is the second studio collection by singer-songwriter Harry Styles, released on December 13, 2019, by Columbia and Erskine Records. Fine Line has been portrayed as rock, pop, and pop-rock. It, too, incorporates components of prog-pop, psychedelic pop, folk, soul, funk, and indie-pop.

Led by three singles: “Lights Up,” “Watermelon Sugar” and “Adore You,” Fine Line debuted at number three on the U.K. Albums Chart and number one on the Billboard 200, making it Styles’ second consecutive number-one collection in the U.S. With 478,000 album-equivalent units sold within its first week of release (of which 393,000 are immaculate deals), the group earned the third-largest sales week of 2019 in the U.S. It broke the record as the highest debut from an English male artist since Nielsen SoundScan started.

White Eskimo is a British band consisting of Will Sweeny as the lead vocalist, Alex Lewis on drums, Roy Bennett on guitar, and Brad Nevinson on bass. Harry Styles was one of the original members of the band before he left to audition for The X Factor.

One Direction, often abbreviated to 1D, is an English-Irish pop boy band formed in London, Britain, in 2010. The band includes Niall Horan, Liam Payne, Harry Styles, and Louis Tomlinson; former member Zayn Malik left from the bunch in 2015. The group marked with Simon Cowell’s record label Syco Records after forming and wrapping up third in the seventh series of the British broadcast singing competition The X Factor in 2010. Impelled to worldwide success by social media, One Direction’s five collections, Up All Night (2011), Take Me Home (2012), Midnight Memories (2013), Four (2014), and Made in the A.M. (2015), topped charts in most significant businesses. It generated hit singles like “What Makes You Beautiful,” “Live While We’re Young,” “Best Song Ever,” “Story of My Life,” and “Drag Me Down.”

In 2013, Styles, together with Liam Payne, became envoys for the cancer charity Trekstock and gathered more than $800,000 through the online fundraising stage Prizeo. Styles supported water wells in India through Drop4Drop in support of Life Water’s World Water Day campaign. In 2016, Styles gave his hair to the U.K. charity Little Princess Trust, which funds wigs made of genuine hair to children who have hair loss as a result of ailments. In October 2017, Styles alongside other musicians performed at CBS Radio’s We Can Survive concert at the Hollywood Bowl for breast cancer awareness. Styles’ first visit raised $1.2 million in charitable donations from ticket deals, Live Nation’s contributions, and GLSEN’s Pride campaign toward 62 charities around the world. It, too, promoted water preservation employing reusing and lessening plastic water bottle usage.

Styles has shown support to the LGBT community by waving the rainbow flag on stage, wearing LGBT-themed clothes, and backing LGBT fans in performances. In 2018, he released T-shirts with the motto “Treat People With Kindness” in a rainbow print in recognition of Pride Month, with all continue profiting GLSEN. He has, moreover, included “Black Lives Matter” and “End Gun Violence” stickers to his guitar. He tweeted in support of the March for Our Lives appeal and actress Emma Watson’s HeForShe gender equality campaign. In December 2019, Styles said in reaction to not utilizing his influence more to back particular purposes:

“Because of dilution. Because I’d prefer, when I say something, for people to think I mean it. To be honest, I’m still searching for that one thing, y’ know. Something I can really stand up for, and get behind, and be like: This Is My Life Fight. There’s a power to doing the one thing. You want your whole weight behind it.”

Sam writes about music and entertainment and is based in the Twin Cities.

Get to know John Legend