All the answers to frequently asked questions about J-Lo!

Since her career began in 1986, Jennifer Lopez has become an icon when it comes to her work as a singer, dancer, and actress as well as her incredible body and looks. Understandably so, as she looks just as good as she did 20 years ago.

Let’s take an in-depth look into the personal life, family, and net worth of the icon.

What is Jennifer Lopez’s profession?

What is her music genre?

Jennifer Lopez’s music is best described as having roots in R&B, pop, Latin, dance, and funk.

When was Jennifer Lopez born?

She was born July 24th, 1969 in Castle Hill located in the Bronx, New York City, US. The house that her family was living in when she was born was a tiny apartment. In her movie, the rom-com “Maid in Manhattan”—where she plays a maid working in a high-class Manhattan hotel—she is seen paying homage to the people living in The Bronx and their struggle to survive.

Jennifer Lopez age: How old is she?

Jennifer Lopez height: How tall is she?

Jennifer Lopez’s weight: What does she weigh?

What are Jennifer Lopez’s nicknames?

Lopez is widely known as J.Lo or Lola. She is also sometimes known as La Guitarra due to her curvaceous, guitar-shaped body.

Where does J-Lo live?

She has homes in the U.S. in Manhattan, New York City and Los Angeles, California.

What is her birth name?

What is J-Lo’s race/ethnicity?

She is a Latino born to Puerto Rican parents. In many of her movies, she depicts the hardships Latinos have to go through in the working-class world of America.

What is Jennifer Lopez’s religion?

She is a Roman Catholic.

Where did J-Lo go to high school?

Did Jennifer Lopez go to college?

Lopez attended Baruch College in New York, but she dropped out after her first semester to focus on her acting career.

What are the names of Jennifer Lopez albums?

What TV shows has Jennifer Lopez been on?

What movies has Jennifer Lopez been in?

What are some Jennifer Lopez songs?

One of the very first awards received by Lopez is the ALMA award for best actress in a feature film in 1998 for two of her movies, Anaconda and Selena. Other prestigious awards won by her are the Billboard Icon Award (2014) and the MTV Michael Jackson Video Vanguard Award (2018) among countless others. So far, she has had a total of 434 nominations and 145 wins.

What is Jennifer Lopez’s net worth?

Jennifer Lopez has a net worth of approximately US $400 million (2019 estimate). 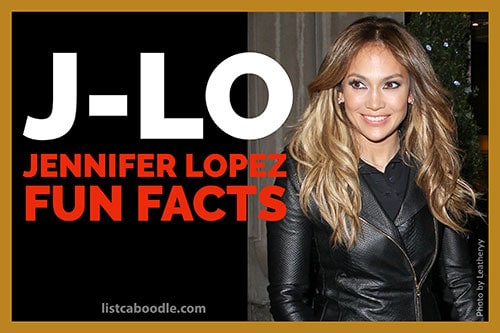 Who is Jennifer Lopez’s Spouse?

In 1997, she married Ojani Noa. It’s been said that Lopez and Noa, a Cuban waiter, fell madly in love before Lopez’s success with her big break, the movie Selena. They divorced after only one year of marriage in 1998.

She married Criss Judd in 2001 and they went through a divorce in 2003. Certain rumors say that Lopez’s marriage to Judd may have been a publicity stunt.

Lastly, she married Marc Anthony in 2004. The two were friends from before their marriage and it seemed that Lopez had found love in their friendship. She went on to have her two twins with Anthony. They were together for 10 years until they divorced in 2014.

Who is Jennifer Lopez dating?

Lopez is currently engaged to Alex Rodriguez (2017-present). The two had met earlier in 2005, back when she was still married to Marc Anthony. They reconnected again in 2017. Rodriguez proposed to her during a trip to the Bahamas. The two have been known to have blended together their families quite well.

Lo has had some very high profiled relationships over the years. One of her on set romances include Wesley Snipes, who she met on while filming Money Train. The brief fling ended shortly after.

From 1999, while working on her album On the 6, Lopez dated Sean Combs known as Diddy now and Puff Daddy back then. The most vivid picture of them being together may cross your mind if you remember Lopez’s green dress from the Grammys in Diddy’s arms. The two had quite the tumultuous time together and had been involved in quite a lot of controversy. Their relationship ended in 2001.

In 2002, sparks flew between Jennifer Lopez and costar Ben Affleck on the set of Gigli. They ended up being engaged right that year as well, but eventually called it off and split in 2004.

Lopez’s long-term boyfriend Casper Smart was one of her backup dancers. They dated from 2011 to 2016, with lots of ups and downs in their relationship. Lopez admits that there was some lack of intensity between them as indicated by the very casual reunions they had over the years.

In 2016-2017, the rapper Drake’s name was linked with Lopez and there were rumors everywhere regarding whether they may have been together. The rumors started when Drake had shared photos on his Instagram with the Latina beauty that felt intimate to some. Lopez, however, denied the rumors saying they were just “hanging out” between working together.

How many times was J-Lo married?

Lopez has married three times: to Ojani Noa in 1997, Cris Judd in 2001 and Marc Anthony in 2004. She is currently engaged to Alex Rodriguez.

Does Jennifer Lopez have children?

Lopez has two twin children, a boy named Max and a girl named Emme. They are 11 years old.

Does Jennifer Lopez have siblings?

Who are Jennifer Lopez’s parents?

Lopez’s father David Lopez was a computer technician at Guardian Insurance Company and her mother Guadalupe Rodriguez was a kindergarten teacher.

She is known to have been on vegan diets before but hasn’t confirmed on being on an ongoing vegan diet.

Lopez was born to Puerto Rican parents. She can speak Spanish although she was encouraged as a child to speak more English, in hopes that it would make getting jobs in the US easier for her.

Which artists are Jennifer Lopez’s inspirations?

Her inspirations include well-known figures such as Tina Turner, Michael Jackson, Barbra Streisand, Madonna, and James Brown. Other artists can also be added to the list, such as Janet Jackson and Rita Moreno for her 1961 musical.

Which artists are influenced by Jennifer Lopez?

A very large number of big names have been influenced by Lopez’s singing, dancing, and acting career as well as her style and fashion. Some of the names include Selena Gomez, Gwen Stefani, Naya Rivera, Bebe Rexha, Ryan Guzman, Kerry Washington, Becky G, Normani, Francia Raisa, Cierra Ramirez and many more.

After Lopez’s participation as a judge on the American Idol, it started a wave for the show to hire highly popular celebrities on the judges’ panel. This phenomenon became known as the ‘J. Lo’ effect.

As of 2013, Lopez claims to have no alterations or plastic surgery, although surgeons seem to believe otherwise.

Lopez is known for her flawless skin and makeup. People often comment on how her makeup and skin look stunning under all lights during tour shows and remains flawless throughout the night. The secret of the ‘J. Lo glow’ lies with her long term makeup artist, Scott Barnes. The two have been working together for years. Barnes does her makeup for shoots, concerts as well as on set for acting. Recently he has revealed many of his secrets and tips which he uses on the stars on the makeup blogger Tati Westbrook’s YouTube channel where he even did a tutorial of his signature technique on the YouTuber.

1.) Words can’t express how proud I am of this incredible musical icon and pioneer. I was honored to be in her presence tonight, and marvel and continue to be inspired by her every day.
Alex Rodriguez

2.) I have always found an excuse to return to work with Jennifer. She’s just my angel, she is one of the most special women, beautiful as any, powerful and sophisticated, but especially a diligent and committed person who is a pleasure to work with.
Pitbull

3.) Despite a carefully cultivated image as an imperious pop empress in ludicrously expensive outfits, her signature hits bear the titles “I’m Real” and “Jenny From the Block”. She managed the perilous transition from actress to music star without ever seeming to pick either as a primary gig.
Andrew Barker

4.) Forgive yourself if you are seeing Jennifer Lopez in your sleep. She is everywhere.
Lynnette Holloway

5.) I judge people on how they smell, not how they look.

6.) You get what you give. What you put into things is what you get out of them.

7.) There are certain people that are marked for death. I have my little list of those that treated me unfairly.

8.) I grew up in the Bronx where you would stay up late with your girlfriends, just being silly in our bedrooms, whatever. And I was always the clown.

9.) Beauty is only skin deep. I think what’s really important is finding a balance of mind, body, and spirit.

10.) I don’t get anything for free. I pay for all my beauty treatments.

11.) It’s the messy parts that make us human, so we should embrace them too—pat ourselves on the back for getting through them rather than being angry for having gotten into them in the first place.

What’s next for J-Lo?

In February of 2020, J-Lo will perform during the Superbowl Halftime Show alongside Shakira. Expect to see a unifying performance by the two Latina stars.

All About Billie Eilish