The Philosopher King's insights on gratitude, change, and living life.

These Marcus Aurelius quotes provide a nice introduction to the Stoicism philosophy.

Marcus Aurelius, The Philosopher King, was a second-century Roman Emporer who was also a Stoic philosopher. His Meditations, written to and for himself, provide readers an opportunity to see how Stoics deal with important issues and how they live their lives. 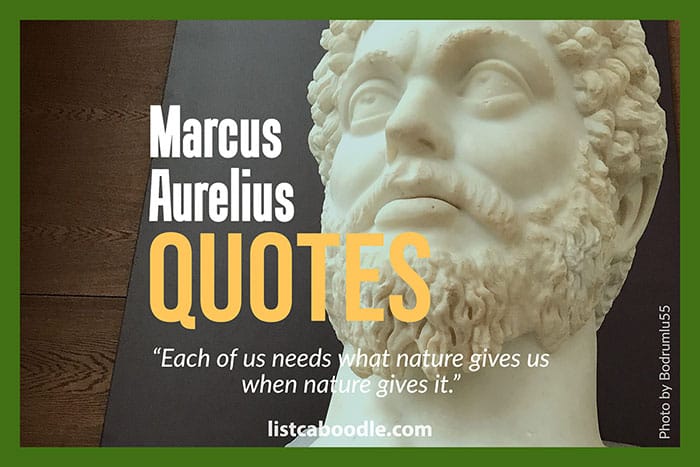 1.) “Waste no more time arguing about what a good man should be. Be one.” 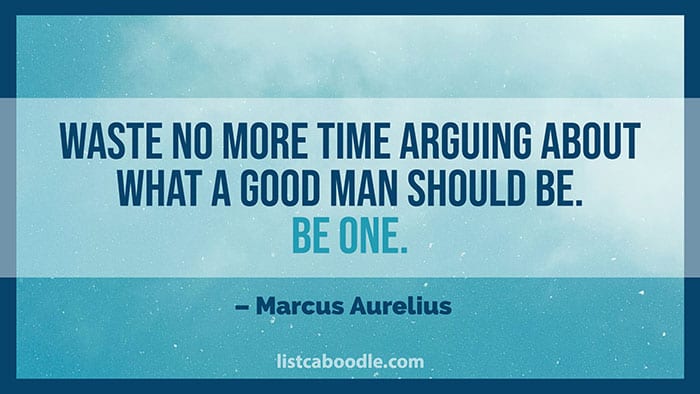 Being a good man was of utmost importance to Marcus Aurelius. To a Stoic, virtue was good, and vice was bad. Most other things that we spend much time discussing or desiring are indifferent. So, our lives are not made better or worse by having or not having them. He earned his reputation as one of the most respected emperors in Roman history.

2.) “How ridiculous and how strange to be surprised at anything which happens in life.” 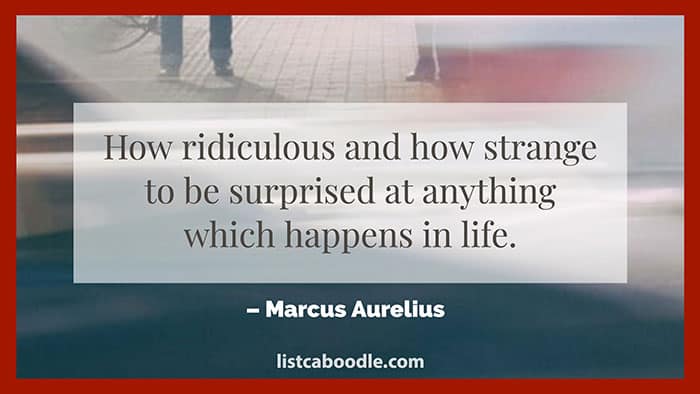 Marcus Aurelius’s reign as Emporer was marked by war and conflict. He was the father of 13 children. He was the last of the Five Good Emporers, a term that Niccolo Machiavelli used. One might guess that with managing a country, negotiating multiple wars, and raising over a dozen children, it was difficult to surprise him. 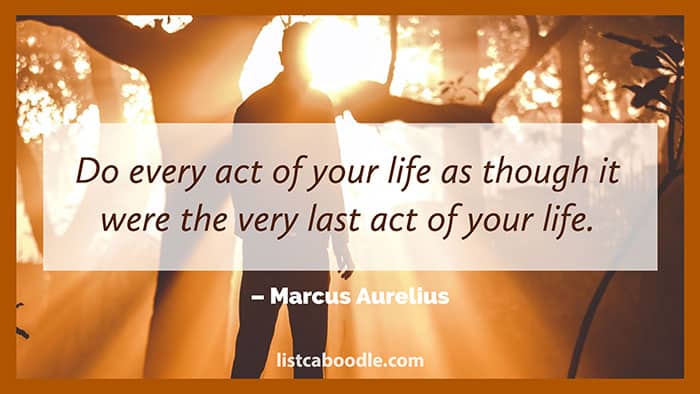 Nicknamed the Philosopher King before and after his death, Aurelius wrote primarily for himself as a way of self-improvement. Living through war-torn times, this saying likely had more than theoretical importance.

4.) “Look well into thyself; there is a source of strength which will always spring up if thou wilt always look.” 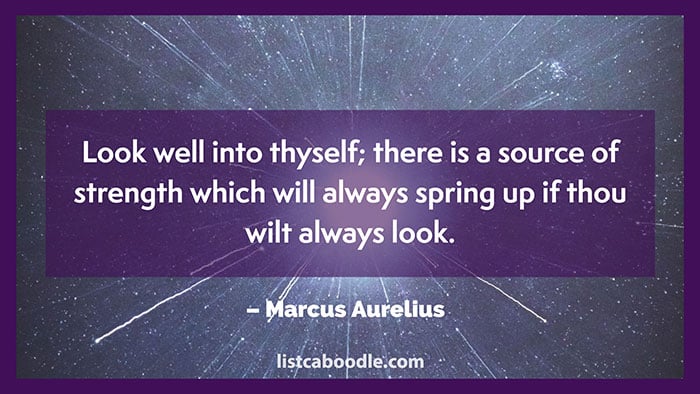 An important element of most philosophies, and especially stoicism, is self-reflection. Marcus Aurelius, although not as highly regarded as Plato or Aristotle, is enjoying a renaissance of interest in his Meditations as Stoicism rises in popularity.

5.) “When you arise in the morning, think of what a precious privilege it is to be alive — to breathe, to think, to enjoy, to love.” 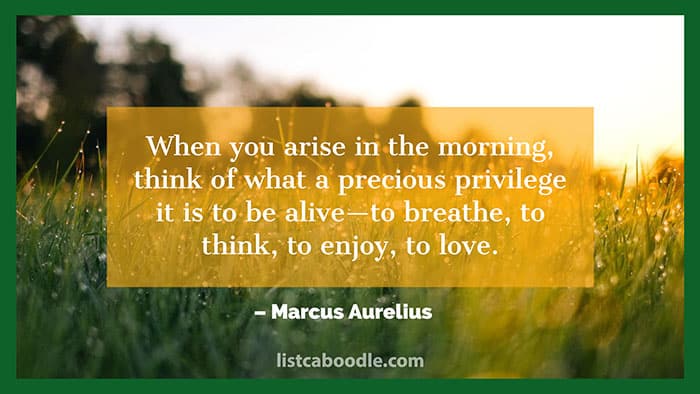 Gratitude was important to Marcus Aurelius. Here’s another quote to reflect that.

Take full account of what Excellencies you possess, and in gratitude remember how you would hanker after them if you had them not.

6.) “The universe is change; our life is what our thoughts make it.” 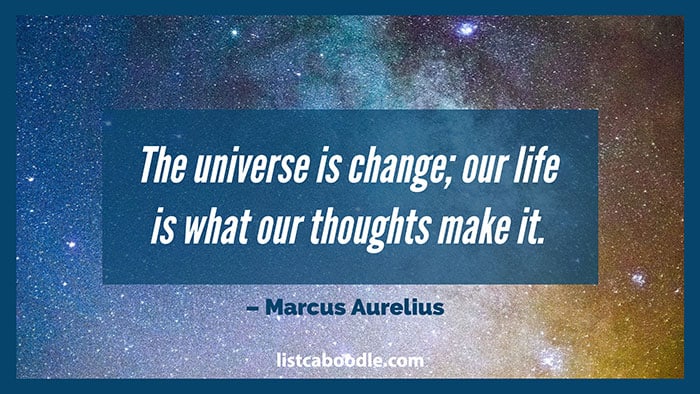 In writing meditations for himself, Aurelius was providing himself a treasure chest of how to deal with things that come his way. One of them was change.

7.) “You have power over your mind — not outside events. Realize this, and you will find strength.” 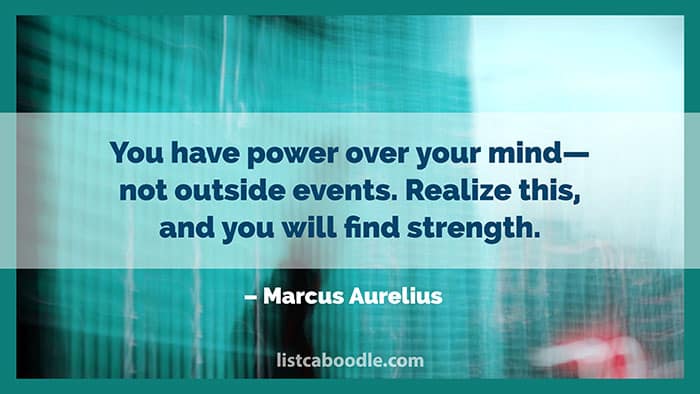 A Stoic believes in temperance which is made up of discipline, modesty, and self-control. Controlling one’s thoughts gives you power.

As you read through this collection of Marcus Aurelius quotes, remember that these were written for himself. Many of them almost take a slogan-like approach to remind him how to act in certain situations. 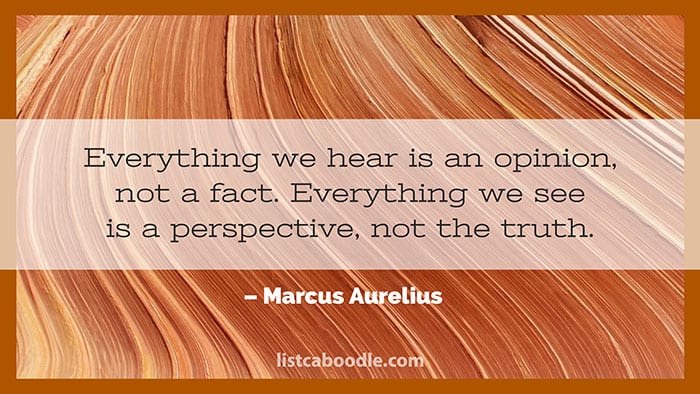 One of the central themes of Aurelius is an interest in developing a “cosmic perspective” and a concern with analyzing one’s judgments.

9.) “Very little is needed to make a happy life; it is all within yourself, in your way of thinking.” 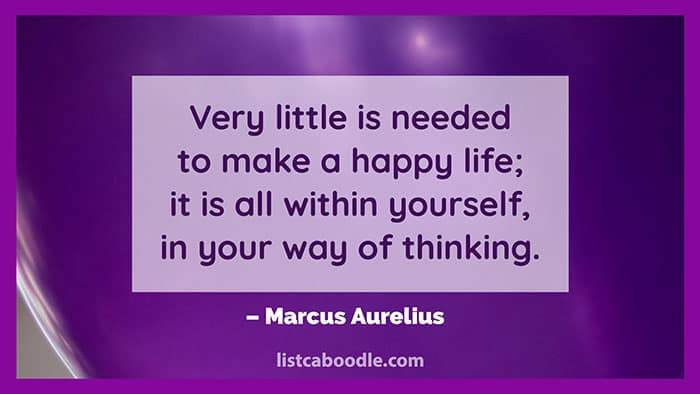 The unimportance of things that are neither virtue or vice is on display with this Marcus Aurelius quotation.

10.) “The best revenge is to be unlike him who performed the injury.” 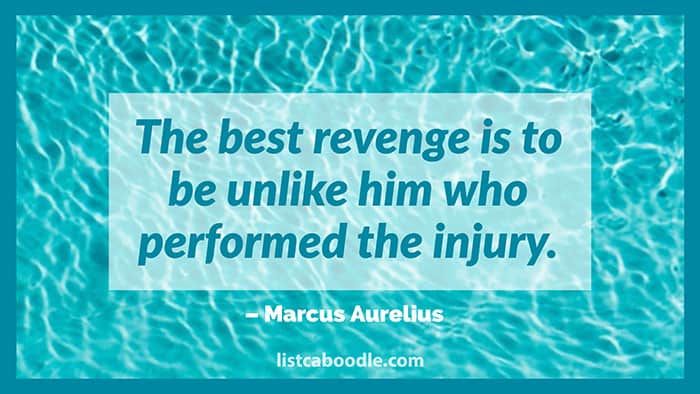 One can use vice (a wrong against you) as an opportunity to focus on the virtue (being a better person). 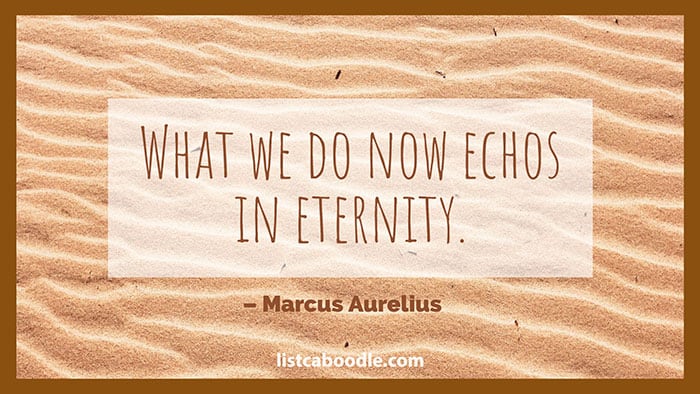 The importance of individual decisions has a far-reaching impact as time advances. Stoics believe in seizing the day and taking advantage of the opportunities in front of you right away. 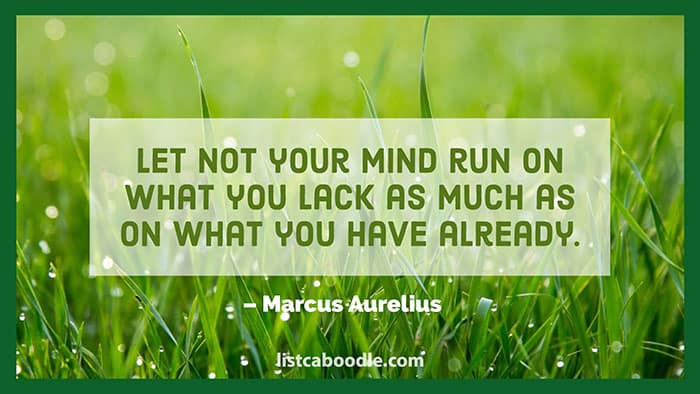 Again, the concept of gratitude is emphasized here. Spending time coveting items not associated with virtue is time wasted.

13.) “Be tolerant with others and strict with yourself.” 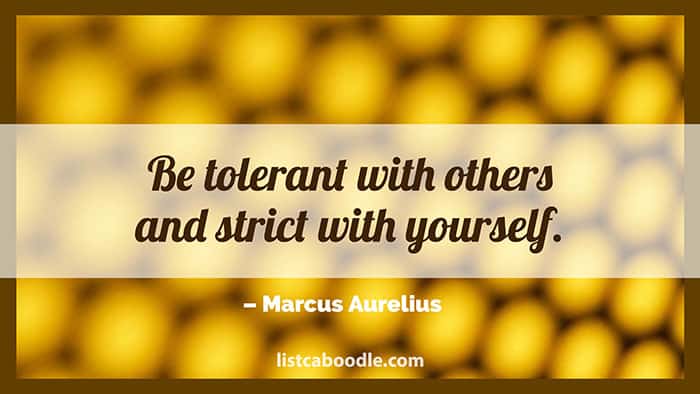 What a great quote! If you’re going to be hard on anyone, make it yourself. You don’t know what others are going through.

Aurelius’s greatest interest was the study of Stoicism, a philosophy that placed great importance on reason, fate, and self-restraint. 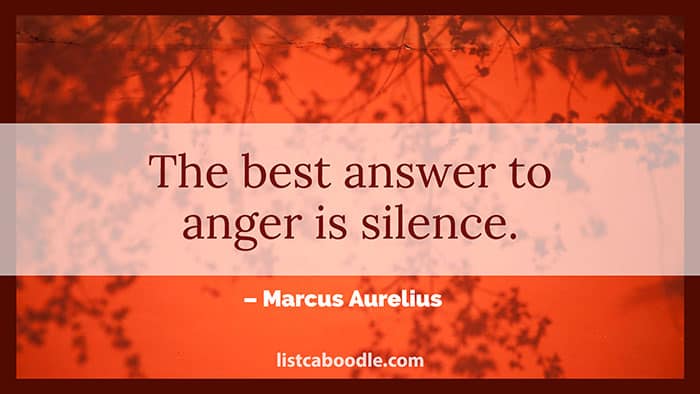 This is so easy to understand, and yet so hard to accomplish in practice. Our tendency is to raise our voice and counter fire with fire. This seldom works. 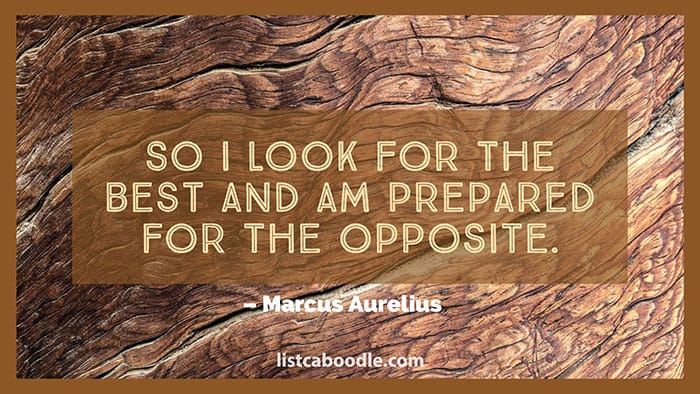 Imagine being the man in charge of the Roman empire. You might have social unrest on the homefront while conducting wars in other parts of your empire. There’s a lot to think about. The positive attitude is on display with the “look for the best,” but there’s the realism of “am prepared for the opposite,” that is also required.

16.) “The more we value things outside of our control, the less control we have.” 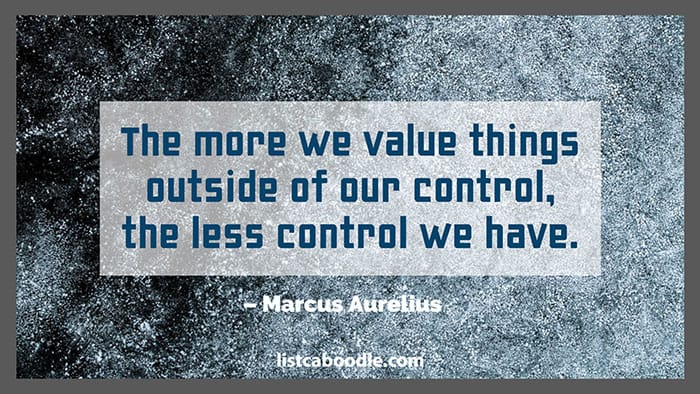 Here’s an example. If a person can only be truly happy on a sunny day, that person is going to have a fair amount of unhappy days. People don’t control the weather. As such, Aurelius encourages us not to place as much value on things outside of our control. 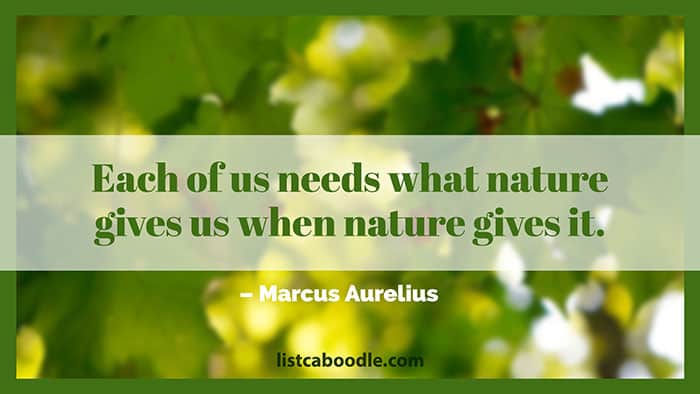 The Stoicism sense of fate is on full display with this meditation. 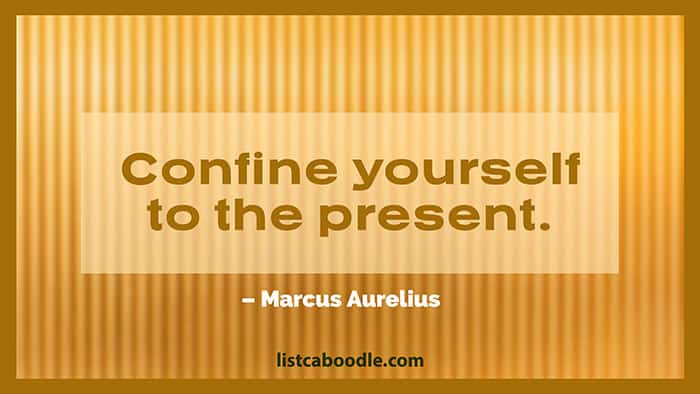 Living in the moment is an important concept. Reliving the past or hoping for the future are elements we have no control over. What we do in the present is what matters.

19.) “You can commit injustice by doing nothing.” 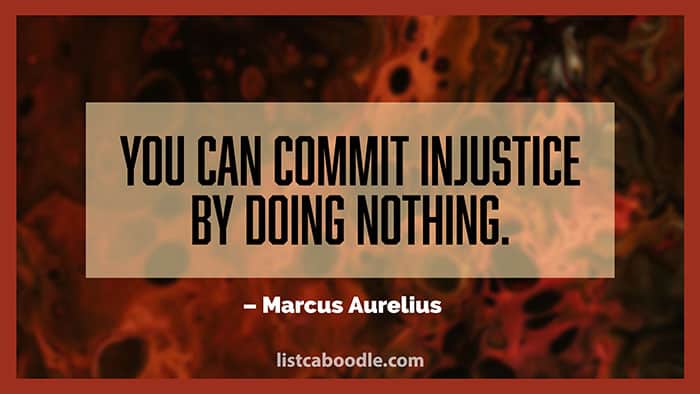 The concept that a sin of omission can be just as damaging potentially as a sin of commission. As Aurelius had to make decisions or choose not to make decisions on a variety of topics leading the Roman Empire, he was in a good position to see the wisdom of this saying.

20.) “It is not death that a man should fear, but he should fear never beginning to live.” 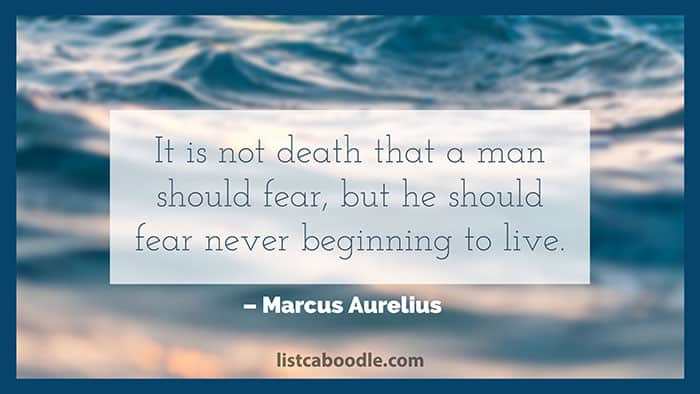 The concept of living for the day was a principle that Marcus Aurelius embraced.

One of my favorite Marcus Aurelius’s quotes is, “The impediment to action advances action. What stands in the way becomes the way.”

And, here’s another, “Dwell on the beauty of life. Watch the stars, and see yourself running with them.”

We hope you enjoyed this look at The Philosopher King’s quotations.

The Wit and Wisdom of Will Rogers