Get to know the TV star and former NFL player

Many people know Nate Burleson from the television shows Good Morning Football, The NFL Today and Extra. But did you know he was a star receiver in the NFL? Let’s get to know the multi-talented TV and sports personality. 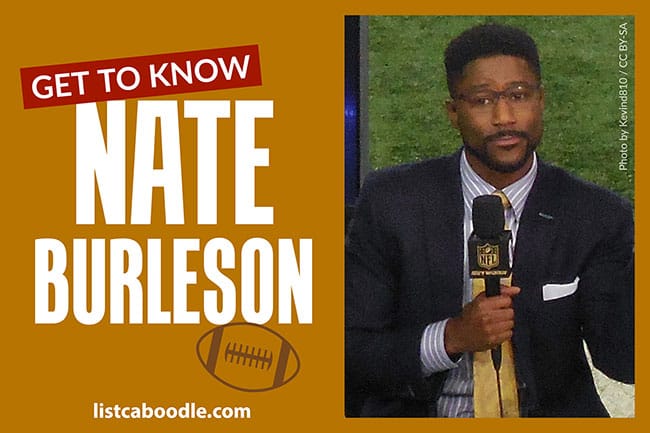 What is his full name?

What is Nate Burleson’s career?

He is a NFL commentator and TV personality for Good Morning Football (NFL Network), The NFL Today (CBS Sports) and Extra.

Where does he live?

Burleson and his family live in Ridgewood, NJ.

Yes Burleson is married to his wife Atoya Burleson. He and Atoya became engaged in 2003 during his early pro football career with the Minnesota Vikings.

The two were college sweethearts at University of Nevada. Atoya was a champion track star at the school.

Does Nate Burleson have any children?

He and his wife have three children. His sons are Nehemiah and Nathaniel II and his daughter’s name is Mia Pearl.

Who are Nate Burleson’s brothers?

Nate’s younger brother Lyndale played basketball at the University of Nevada and one year in the German pro league.

Who are his parents?

Nate’s father Al Burleson was a defensive back for the Calgary Stampeders of the Canadian Football League and also played for the Los Angeles Express of the USFL (United States Football League).

His mother is Valerie Burleson.

Where did Nate Burleson go to high school?

As a sprinter and hurdler on the high school track and field team, Burleson won a state title in the 300 meter hurdles.

His high school honors include being named the City Athlete of the Year by the Seattle Times.

Where did Nate Burleson go to college?

He played for the Wolf Pack football team for three seasons from 2000 to 2002. His 138 receptions in 2002 for the team was the second highest total in NCAA history.

During his senior year, he led NCAA in receiving yards and receptions per game.

His collegiate honors include:

1.) Brothers Kevin and Nate Burleson share a unique honor with one other brother tandem. They are the only siblings in which one brother played in the NBA and the other in the NFL.

2.) Nate has a maple leaf tattoo, representing and honoring his Canadian heritage. He even once expressed interest in playing for the Canadian football team in the World Cup.

3.) He graduated from the University of Nevada, Reno with a degree in human development and family studies.

4.) After his car accident while trying to adjust a pizza box while driving, Burleson was awarded a year’s supply of free pizza from DiGiorno.

5.) Burleson was given the “Good Guy Award” for his good-natured interactions with the Detroit media.

6.) Nate the rapper? He rapped on the song “Put in Work” by Wizdom (featuring Wu Tang Clan).

7.) He is a self-described foodie, and is especially fond of burgers.

Burleson was chosen in the 3rd round of the 2003 NFL Draft by the Minnesota Vikings. He was the 71st overall pick.

Burleson’s break out season came in 2004 with the Minnesota Vikings after teammate Randy Moss injured his hamstring. Burleson caught 68 balls for 1,006 yards that year.

What position did Nate Burleson play?

He was a wide receiver and return specialist on both kicks and punts.

What NFL teams did Nate Burleson play for?

He saw action on three different teams over his career, the Minnesota Vikings for three seasons, the Seattle Seahawks for four seasons and the Detroit Lions for his final four seasons. He signed with the Cleveland Browns in 2014 but was cut before the regular season began.

What number did he wear on his jersey?

Nate wore jersey number 81 with the Vikings and Seahawks to honor his father, who wore the same number in high school. When he joined the Detroit Lions, he changed his jersey number to 13. Superstar wide receiver Calvin Johnson already wore #81 on the team.

Does Nate Burleson have a Super Bowl ring?

No, he does not have a Super Bowl ring.

Is Nate Burleson in the Hall of Fame?

Burleson is not in the NFL Hall of Fame, but was inducted into the Nevada Athletics Hall of Fame in 2012.

What happened with Nate Burleson and pizza?

In 2013 Burleson was driving his 2009 GMC Yukon in Farmington Hills, Michigan when he reached over to adjust a pizza box from falling off his passenger seat.

The distraction caused a single-car crash. He hit the median wall of the freeway and a broke his arm in two places. In the final season of his career, Burleson played in only 9 games with the Lions.

Burleson began his broadcasting career by attending the NFL Broadcast Boot Camp in 2012. One of his first TV jobs was working on the broadcast team for Lions preseason games for the Detroit Lions Television Network.

By 2014 he was hired by the NFL Network as a game analyst.

When did he join Good Morning Football (GMFB)?

Who are the hosts of GMFB?

According to network executives, the show is not scripted.

When did he join The NFL Today?

When did he join the entertainment show Extra?

Who are the Extra show correspondents?

What is Nate Burleson’s net worth?

He is estimated to be worth well over $10 million.

Salary – how much does Nate Burleson make a year?

The NFL Network pays him $2.75 million per year. Add in the salaries from his other gigs and you can see he is doing quite well!

What are his business interests?

Nate’s passion is all about style and the clothing he wears. In 2010 he launched his own clothing line called Lionblood. He also partnered with William Malcom to create a line of business suits called B LINE.

Burleson signed with DraftKings in 2019 to be the voice for their ad campaign.

What are his charities?

He teamed up with NFL players Marcel Reece, Eric Weddle and Rashad Jennings in a partnership with shoe company Awl and Sundry to send shoes to African children.

On his approach to broadcasting

For so long, traditional football TV catered to one demographic: The middle-aged man who loves everything about football. You’ve got to realize there are children who are just learning about the game. There are 30-year-old guys who are on the fence and their only interest is being in fantasy. There are women who know more about football than their boyfriends. Maybe they are looking for some talk about fashion along with fantasy football?

You have to look at creative ways to reach those people. Fans don’t know what they like until you give them something they like.

Every day, man. You’ve got to have the energy every day.

Once I was offered the “Good Morning Football” job, at first I said no. Why would I want to get up at 4 in the morning? I’m a retired athlete. I retired so I could live a stress-free life. Why would I wake up at 4 in the morning, have to study scripts and study games, get back in the film room, write scripts for the Prompter, read the Prompter, toss the news, work on all these skill sets that I don’t have, what’s the point? I remember telling myself I’m not going to do it.

The biggest thing I learned is that I didn’t know anything. It was like being a rookie and the coach saying, ‘You might think you’re hot stuff, but I’m going to put you in your place.’ I realized there was a lot more to it than just being good at answering questions after a game. It was an eye-opener.

When I first got to the NFL Network, I was just like every other player protecting brand, protecting the fraternity. I was always complimenting guys and I never wanted to step on people’s feelings.

I remember, one of my mentors was like, ‘Say something.’ I was like, ‘What do you mean? I am saying something, I was clever. I’m clever, I make people laugh, I smile.” He was like, ‘You did that in the locker room, but say something, man. You know the game. Take a risk and criticize these players. They’ll respect you more when they see you.’ I was like, ‘Damn, this feels so awkward.’

It literally was a cringeworthy feeling when I had to criticize a guy, even when I knew the player was in the wrong, like he dropped the ball or said something stupid.

NFL Network was the place for me. It felt like home.

Initially, there were a few entertainment networks reaching out. I wanted to stick my toe in the water of that space. “Extra” had a plan for what they wanted out of me. I met with them in L.A., had multiple phone calls, I was in their offices here in New York.

On his TV broadcasting career

I went to boot camp (in 2012), and that’s when everything started changing. That’s when I met J.B. (James Brown, host of “The NFL Today”) for the first time, and we had an extended conversation.

It was almost like getting drafted again. (on auditioning for CBS)

When I first moved to New York three years ago, I didn’t turn down a job. I literally said yes to everything, and it stressed me out. That was before I accepted “The NFL Today” gig. Now I’m a little bit more selective, and I’m working at my own convenience. It gives me the ability to give 100 percent of myself. I don’t want to spread myself too thin.

Nate didn’t want to play football at first, until he got into it.
– Al Burleson Sr., Nate’s father

We had all watched him; we had all met him. It was kind of from our standpoint a unanimous no-brainer that he was the right guy for the job.
– Sean McManus, CBS Sports chairman

I think he’s got a lot of credibility having retired fairly recently from the game. His credibility and his perspective on the league and its players is first rate. His presentation is smooth yet he can be very passionate about what he’s talking about and he feels strongly about his opinions. The fact that he lives and breathes NFL football seven days a week gives him a really solid perspective and a really good foundation of knowledge that he presents to an audience.
– Sean McManus, CBS Sports chairman

I think he’s got a lot of credibility having retired fairly recently from the game. His credibility and his perspective on the league and its players is first rate. His presentation is smooth yet he can be very passionate about what he’s talking about and he feels strongly about his opinions. The fact that he lives and breathes NFL football seven days a week gives him a really solid perspective and a really good foundation of knowledge that he presents to an audience.
– Sean McManus, CBS Sports chairman

It elevates Nate where he is becoming more and more of a transcendent, crossover talent. (on Burleson joining TV show Extra)

Nate has the appetite, the ability and the gravitas to do whatever he wants in the sports and entertainment broadcasting world.

I’ve said for some time now that I truly really believe Nate is going to cross over into the lifestyle/entertainment-hosting world in a significant way. We’re in the process of that happening. It’s something we‘re going about in a methodical way. We’ve had some high level meetings in LA and New York. I will leave it at that.