Thrift store treasures are found every day by thrifters, flippers looking for reselling items and value shoppers. By their nature, prices at thrift shops are low so you can usually always find a great deal on clothing and household items. But what about the really big scores? We’ve gathered eight tales of once-in-a-lifetime finds that will inspire your next thrift-store hunt.

A trip to your local thrift store or second-hand shop can be a treasure hunt for shoppers looking for vintage items and valuable art. These stories of famous thrift store treasures will give you ideas of profitable things to look for and items you can flip to make money.

In 1994 a Toronto man stepped into a thrift store and left seeing green. The avid golfer found a familiar green jacket hanging on a clothing rack at the shop. He snapped it up for $5.

He knew he had found an authentic championship green jacket, issued by Augusta National Golf Club for the winner of The Masters’ tournament.

Vintage sporting goods and athletic wear are hot items, especially when they can be connected to star players and coaches.

A Knoxville, Tennessee couple bought a vintage black athletic sweater at a Goodwill thrift shop in 2014 for 58¢. Lettering on the front of the sweater read “West Point.”

They really didn’t know what they had—a warm-up jersey perhaps? It turns out, the sweater belonged to legendary coach Vince Lombardi when he coached there from 1949 to 1953. His name was written on the inside label.

Heritage Auctions in Dallas sold the sweater for $43,020 at auction.

3. Found: An original copy of the Declaration of Independence

In 1820, the United States secretary of state John Quincy Adams commissioned 200 copies to be made of the Declaration of Independence.

Fast-forward almost 200 years later to 2006 in a thrift shop in Nashville, Tennessee. A man walks in and discovers one of the original copies rolled up amongst the clutter of old books and rock t-shirts. It was marked at $2.48 plus tax.

4. A prize inside the box 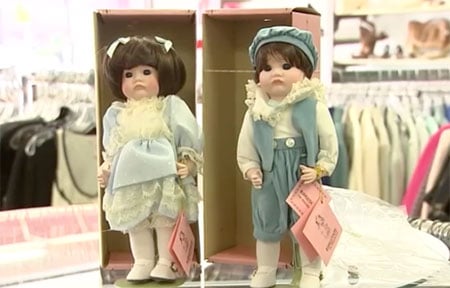 In 2018 a California man dropped off his mother’s old doll collection at the local thrift store in Santa Monica, California. Little did he know how big a donation he was truly making.

An envelope inside the box of the antique porcelain dolls contained $36,000 in greenbacks.

Workers at the shop immediately contacted the man upon discovering the loot. He didn’t believe them at first, but it certainly was a welcome surprise to the man. 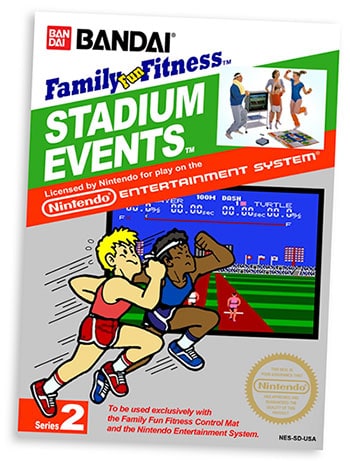 This story is a great example of how rarety drives pricing. But first, a little video game history.

In 1987 the video game company Bandai came out with its Stadium Events game. The video utilized a Family Fun Fitness mat for players to stand, walk, run and jump on, activating on-screen characters.

Enter video game powerhouse Nintendo, who purchased rights to the game and re-released the product under a different name. All of the original copies of the game were pulled from store shelves and destroyed.

6. Time to make some money

A Phoenix, Arizona watch collector stumbled into some good luck at a local Goodwill store in 2014. He recognized a watch in the store’s jewelry case and thought it would make a good buy for only $5.99.

It was a 1959 Jaeger-LeCoultre diving watch in used, but decent condition. He posted his find to a watch collectors website and sold the watch for $35,000.

Less than 1,000 of the watches were produced, and collector demand is high for watches of this type.

Two college students from Florida made a unique discovery at their local Salvation Army thrift store in 2017. And it cost them under two bucks!

Underneath a bunch of sweaters in a plastic bin, they found a set of NASA flight suits and purchased them for $1.20.

The American Space Museum looked them over and confirmed their authenticity. Museum experts suggested the suits came from shuttle missions from the early- to mid-1980s. They appraised the suits’ value at $5,000. 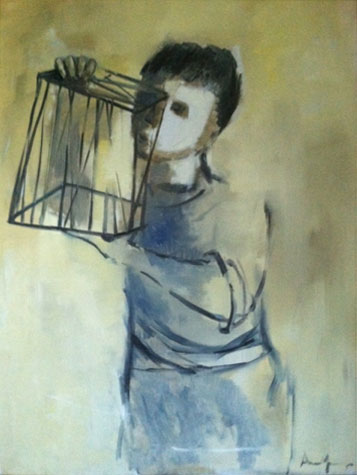 A big payday is possible if you are lucky enough to find a well-known artist’s painting at your local thrift shop. Newly discovered works can go for millions of dollars to high-end art collectors.

Such is the case of a California man who found an original Andy Warhol painting in a Yucca Valley shop.

At first, he wasn’t sure what he had and put it away in his attic. It was only after seeing a story on tv about another Warhol found in Las Vegas that he realized the signature on his painting was a match.

The estimated value of his Warhol painting, called “Boy with Birdcage,” is as high as $2.5 million dollars. The purchase price totaled $40.

Some of the biggest scores to come out of thrift stores and second-hand shops are paintings by famous artists. Like the Warhol above, these paintings were likely in a long-time collector’s possession, only to be made available after their death. They are sometimes donated to thrift shops by family or estate services without the knowledge of the value, history or significance of the work.

It pays to keep an eye out for these hidden masterpieces. Check out these examples of valuable paintings found in thrift stores:

1.) Indiana man paid $30 an original painting, “Magnolias on Gold Velvet Cloth,” by Martin Johnson Heade. It is worth $1.2 million.

2.) A North Carolina woman looking for cheap canvases to paint over-purchased a large square painting donated by a church group for $9.99. It turns out to be an original artwork by Ilya Bolotowsky titled “Vertical Diamond.” It sold for $34,375 at Sotheby’s.

3.) A savvy shopper at a Milwaukee Goodwill store picked up an original Calder painting for $12. The piece is worth $9,000.

4.) An Ohio man discovered the Picasso reproduction poster he bought is actually a genuine linocut print, valued at $7,000.

5.) It isn’t just about the old masters, there’s money in modern art too. Four paintings of cartoonist and creator of the Simpsons Matt Groening showed up in a Washington thrift shop. A woman paid 25¢ each for them and intends to auction them off starting at $2,000 each.

Look for these valuable treasures at your next thrift store hunt:

One that got away: Ancient Native American pottery in a Goodwill store

A 1,000-year-old piece of pottery showed up at the Buffalo, NY Goodwill in 2012. A note tucked inside the 7.5” tall relic read “Found in a burial mound near Spiro, Oklahoma in 1970.” The piece was likely taken from a burial site there.

Goodwill employees had no idea of the potential value of the item, so it was put up for auction. It received two bids (for a grand total of $4.99) before it was pulled from bidding. Knowledgeable collectors saw it was an important historical object, alerting staff at the store.

Goodwill donated the pottery to the Caddo Indian Nation in Oklahoma. Experts believe it originally came from the Spiro Mounds archaeological site there.

Thrift store treasures yet to be found? $13,000 sewn inside an old suit

This story begins with an elderly man and his life savings. Back in 2011, he donated some clothing to the local Goodwill, including an old suit he no longer needed. The only problem was, he had sewn $13,000 inside the lining of the suit as a ‘safe’ hiding place.

The 80-year-old man didn’t trust banks with his money, so into the suit it went. Unfortunately, his lapse of memory cost him dearly. He told Goodwill about his situation but the staff at the shop could not find the suit.

There is a $1000 cash reward for the return of the suit and the cash. So keep an eye out for an ill-fitting suit with a little extra something in the lining!

Greg is a designer and writer.