Like Your Chili Hot? Your Guide to Picking the Perfect Pepper

Whether you like the kick of a hot pepper or you prefer a more gentle heat, it pays to know your peppers. There’s a big difference between a banana pepper and ghost pepper. Of the thousands of varieties of peppers, each has its own characteristics. We’ve listed some of the more common varieties here with a brief description of each one. Find out what peppers to try next in your favorite chili recipe! 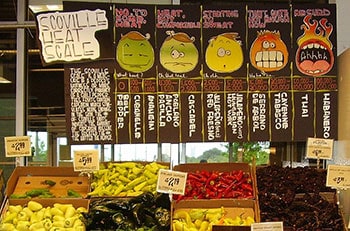 Where does the heat come from in a pepper?

All peppers contain capsaicin, a compound believed to work as a defense mechanism against consumption by mammals and also inhibit fungi growth. Capsaicin produces that burning sensation you get when you bite into a hot pepper. If you can stand the heat, capsaicin boasts several health benefits. It works as an analgesic and anti-inflammatory and some believe it has other benefits like inhibiting cancer.

What is the Scoville scale for peppers?

In 1912 a pharmacist named Wilbur Scoville came up with a way to measure the heat of chili peppers. Named the Scoville Organoleptic Test, it is more commonly known as the Scoville scale. The test basically measures heat sensation by human testers, from 0 to over one million. Units of measurement are called Scoville heat units.

What You Need to Know about Peppers

Part 2: Get to know your peppers

The Bell pepper is probably the most common sweet pepper. It is typically colored red, green or yellow. This crunchy and juicy pepper can be eaten raw, added to salads or roasted. 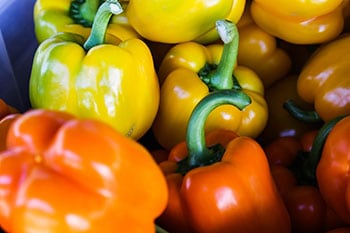 This pepper is commonly found stuffed inside green olives. It is a sweet red pepper, much like a bell pepper. Ideal for roasting or eating raw with dip.

This mild Spanish pepper has a sweet flavor and is perfect for roasting. It is bright red and is great for stuffing.

The Guernica is another Spanish pepper with not too much heat. The skin toughens as the pepper matures, so roasting and peeling is recommended. Good stuffed or fried.

This familiar pepper is found in both sweet or hot varieties. The pickled version has the least amount of heat. Good grilled or served with meat.

This Spanish pepper is tender and sweet. It is commonly fried and served alongside pork or lamb.

It makes sense that the Basque Fryer is commonly used in French Basque recipes. It features tender skin and has an unusually twisted shape. When green it has a peppery zest without too much heat. When ripened and red the flavor is sweet. Great for sauces, sautéed or fried with meat.

This pepper is named after Anaheim, California and is great for stuffing. The flavor is sweet with a bit of spiciness, although the skin can be a bit tough. Roast for easy peeling. Great in salads, stuffed, or for making salsa verde.

This Japanese pepper has thin walls and features a mild heat with a touch of sweetness. Most often used in tempura.

The Poblano pepper has good flavor with a kick of heat, but not too overpowering. It is a good pepper for grilling and stuffing. When young, the Poblano is dark green. As it matures and becomes red, it is usually dried—and called Ancho pepper.

the Chilaca is used in sauces and roasting, or can be grilled when fresh. It has a medium hot flavor. As it matures, the color turns to dark brown. It is then dried and called pasillas.

This ubiquitous pepper can be found in all forms of Mexican cuisine. It is perfect for salsa and commonly pickled. The Jalapeño is named for Jalapa, the capital of Veracruz, Mexico. In its dried and smoked form, it is called chipotle pepper. 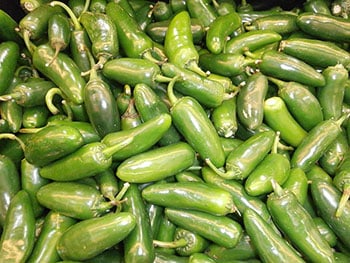 As you may have guessed, this is the pepper used to make Tabasco® sauce. It was named after the Mexican state of Tabasco.

The Serrano is a Mexican pepper. The smaller you find them, the hotter they’ll be. Serranos are good for making hot salsa, guacamole and Mexican cuisine. The peppers are commonly used while still green. After they turn red, the peppers can be pickled or dried.

These small peppers are round to triangular in shape and often pickled.

Cayenne has a bright red color and is usually dried and powdered for a milder bite. The fresh peppers are very hot. Historically Cayenne has been used medicinally for its healing attributes.

These tiny but powerful peppers are also called Bird’s Eye peppers. Thai peppers can be used in both red and green forms. They are commonly found in Thai foods and stir fry.

The Habanero is small but powerful. It’s probably the hottest of the commonly found peppers. Judicious use in salsa and hot sauce recipes is recommended. Its color ranges from red to yellow to brown, although it is most commonly orange in color. The pepper was named for Havana, Cuba. 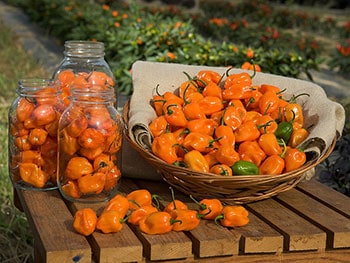 This is just a sampling of the many pepper types to explore. We hope it helps you to better know your peppers. Check out a few of them yourself. Enhance your next meal or spice up your chili recipe! You may also be interested in this list of helpful tips and tricks in the kitchen. Do you know the amazing health benefits of the common onion? Learn more about onion facts, tips and quotes.

40 Things to Give up for Lent