10 things you need to know to survive a zombie apocalypse

We’ve seen them in the movies… the craving for human flesh, the slow-moving stagger, the absence of all law and order and the streets descending into chaos. They are the undead, the soulless bodies of zombies. Prepare yourself for your next zombie encounter with this Zombie Survival Guide. It may be your only hope.

Zombie Survival Guide: How to survive a zombie apocalypse

Zombie movies have taught us a lot about the behavior of the living dead. Here are the top ten things you need to know about zombies and how to survive the next apocalypse.

Since zombies are already dead, you are technically not killing them, but immobilizing them.

The undead tends to congregate in groups. They overcome their limitations (usually rotting flesh or missing body parts) by maintaining strength in numbers. Where there’s one, there will be more. Be prepared and take action. 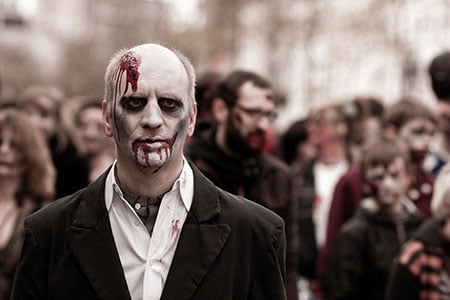 Can zombies see you trying to hide? Well, sort of. Zombies rely mostly on smell and sound to locate their prey. Their vision is poor since the dead don’t blink or have tears. Sometimes they may even have an eye or two gouged out from a previous battle.

Check out the Zombie Chronicles Map.

Zombies can’t talk. The reanimated dead are only able to groan since they are technically not alive and breathing.

Zombies can hear, but not well. Necrosis (the death of cells in living tissue) causes progressive hearing loss in the walking dead.

Zombies locate food (humans) mostly be smell. They are attracted to blood and the fear pheromones of their victims. 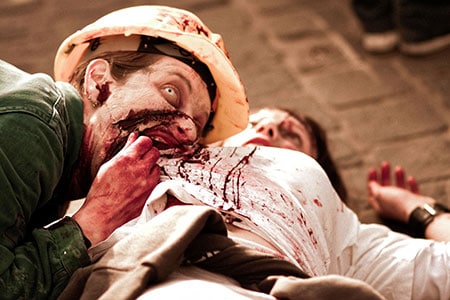 Zombies eat living human flesh and brains. They don’t eat other zombies since that flesh is already dead.

The effect of rigor mortis and rotting and decaying musculature prevents zombies from speedily pursuing victims. Expect to be pursued in slow motion, as most zombies can at best muster a labored, staggering gait.

No, zombies don’t sleep—but they do enter a state of torpor in which they become motionless and catatonic.

9. Are zombies afraid of anything?

Zombies are afraid of one thing: Fire.

10. What are zombies’ weaknesses?

Because they are reanimated from a corpse, zombies decay at the same rate as a regular corpse. A swing of a baseball bat or a shot from a gun will slow down any zombie with disintegrating flesh and muscle tissue.

And, as mentioned previously, use fire whenever possible to halt the progress of attacking zombie hordes.

Brush up on your zombie knowledge with these zombie facts and trivia. Great for impressing your buds, strangers at the bus stop and cute zombies at the pub crawl. 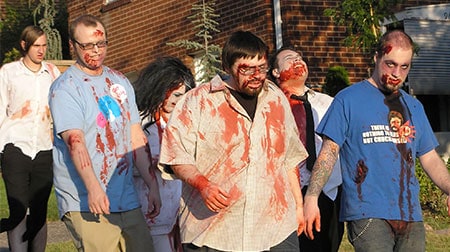 What are other names for zombies?

What was the first zombie movie?

The 1932 film White Zombie is widely credited as the first feature-length motion picture about zombies. Famed horror film actor Bela Lugosi stars as an evil voodoo priest who creates a zombie out of a beautiful young lady to “perform his every desire,” as the film’s promotional poster so provocatively describes.

Although criticized for its weak acting and exaggerated plot lines, the film nonetheless spawned a sequel titled Revolt of the Zombies in 1936.

The modern zombie film genre began in 1968 with the low-budget film Night of the Living Dead. In fact, director George Romero would go on to produce a series of five more “Dead” films: Dawn of the Dead, Day of the Dead, Land of the Dead, Diary of the Dead and Survival of the Dead.

Fun Fact: The word “zombie” is never mentioned in the film Night of the Living Dead. Instead, the living-dead attackers are referred to as “ghouls.”

The first mass Zombie Pub Crawl occured in Minneapolis, MN on October 15, 2005. It consisted of nearly 150 costumed “zombies” moving from bar to bar in Northeast Minneapolis. The popular event has since grown in size and has become an October tradition for zombie lovers. Similar pub crawl events are now found in cities nationwide. 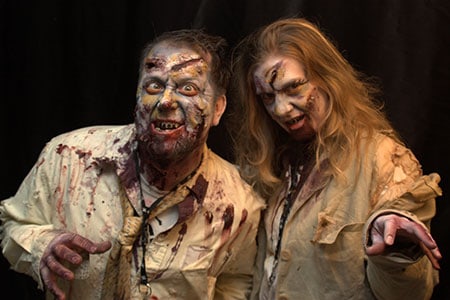 When were the first zombies discovered?

Some ethnologists believe the word zombie has origins in West Africa. The Kongo words nzambi, meaning “god” or “spirit.” and Zumbi, meaning “fetish,” form the basis for this theory.

In the 18th century, zombie legends and folklore migrated to Haiti along with the slave trade. The Haitian Creole word zonbi describes a person who died and is brought back to life without speech or free will. Voodoo priests called Bokors (or houngan) are said to have resurrection powers and the ability to control the zombies’ behavior for use as slaves on farms or plantations. Zombification might also be implemented as a means of punishment.

The word zombie first occurred in written English in poet Robert Southey’s book History of Brazil. Tales of Haitian voodoo and zombies grabbed the attention of western culture in 1929 with the publication of W. B. Seabrook’s The Magic Island.

After the break-out appearance in White Zombie in 1932, zombies gained mainstream popularity in other notable films such as 1943’s I Walked with a Zombie and Ed Wood’s cult classic Plan 9 from Outer Space in 1959.

Hopefully, this Zombie Survival Guide has prepared you to take on and survive the next zombie apocalypse. Or at least you’ll be able to authentically act the part in your next zombie pub crawl. Be safe out there.

(No zombies were harmed in the writing of this blog. Always be kind to your fellow lurkers!)

Greg is a designer, writer, and co-founder of Listcaboodle.

Be sure to check out these other fun lists:

Best Things to do in Quebec City: Attractions, Food, Fun