These 47 artificial intelligence quotes tell the story of the machine learning through the words and thoughts of leading tech industry minds, business leaders and scientists.

What does the future of AI look like? Are all jobs at risk of automation? How will life improve with autonomous vehicles? Will robots become our overlords? Let’s find out what the experts say.

Voices from the past: historical quotes on artificial intelligence

These artificial intelligence quotes date back to a time when the idea of AI was more science fiction than reality. 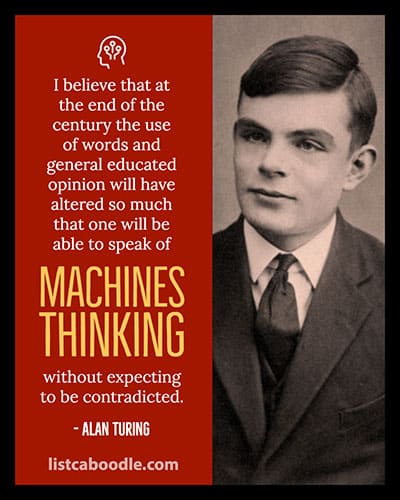 1.) I believe that at the end of the century the use of words and general educated opinion will have altered so much that one will be able to speak of machines thinking without expecting to be contradicted.
– Alan Turing, from 1950
British mathematician and logician

2.) Artificial intelligence would be the ultimate version of Google. The ultimate search engine that would understand everything on the web. It would understand exactly what you wanted, and it would give you the right thing. We’re nowhere near doing that now. However, we can get incrementally closer to that, and that is basically what we work on.
– Larry Page, from 2000
Co-founder of Google

3.) If you had all of the world’s information directly attached to your brain, or an artificial brain that was smarter than your brain, you’d be better off.
– Sergey Brin, from 2004
Co-founder of Google

4.) If you invent a breakthrough in artificial intelligence, so machines can learn, that is worth 10 Microsofts.
– Bill Gates, from a 2004 college address
Co-founder of Microsoft

The field of AI is still in its early stages of development. Some of the biggest names in technology give their thoughts on it’s future.

5.) The world hasn’t had that many technologies that are both promising and dangerous. We had nuclear weapons and nuclear energy, and so far so good.
– Bill Gates
Co-founder of Microsoft

7.) We’re at the beginning of a golden age of AI. Recent advancements have already led to invention that previously lived in the realm of science fiction — and we’ve only scratched the surface of what’s possible.
– Jeff Bezos
Founder, CEO and President of Amazon

8.) When I started Microsoft, I literally wrote a note to my parents, and I said, ‘Okay, I may miss a bunch of breakthroughs in AI, and that’ll be what I give up to create this company, but oh, well. Well, for about 20 years, I didn’t miss much. More recently, there’s amazing things going on, and fortunately, Microsoft has gotten to a size that it, along with Google and many others, gets to participate.
– Bill Gates

9.) Much of what we do with machine learning happens beneath the surface. Machine learning drives our algorithms for demand forecasting, product search ranking, product and deals recommendations, merchandising placements, fraud detection, translations, and much more. Though less visible, much of the impact of machine learning will be of this type — quietly but meaningfully improving core operations.
– Jeff Bezos 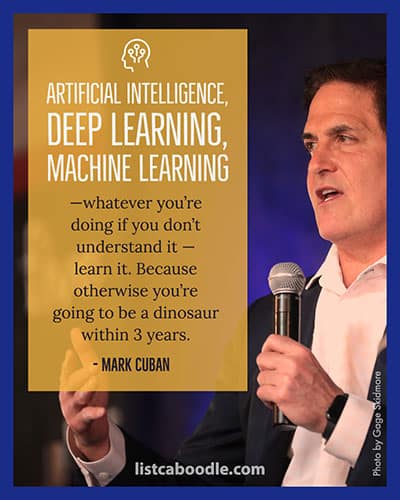 10.) Artificial Intelligence, deep learning, machine learning — whatever you’re doing if you don’t understand it — learn it. Because otherwise you’re going to be a dinosaur within 3 years.
– Mark Cuban

12.) AI can be our friend.
– Bill Gates
Co-founder of Microsoft

13.) We are now solving problems with machine learning and artificial intelligence that were … in the realm of science fiction for the last several decades. And natural language understanding, machine vision problems, it really is an amazing renaissance.
– Jeff Bezos
Founder, CEO and President of Amazon 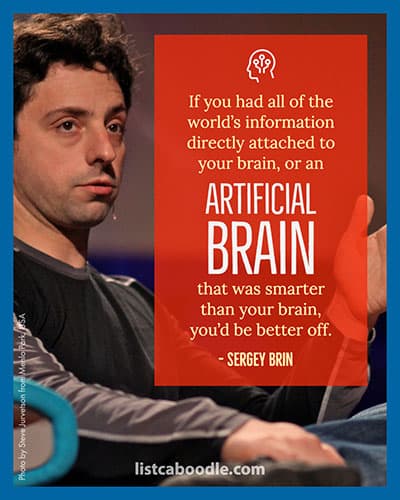 14.) If you had all of the world’s information directly attached to your brain, or an artificial brain that was smarter than your brain, you’d be better off.
– Sergey Brin
Co-founder of Google

16.) I predict that, because of artificial intelligence and its ability to automate certain tasks that in the past were impossible to automate, not only will we have a much wealthier civilization, but the quality of work will go up very significantly and a higher fraction of people will have callings and careers relative to today.
– Jeff Bezos

17.) I would say, a lot of the value that we’re getting from machine learning is actually happening kind of beneath the surface. It is things like improved search results, improved product recommendations for customers, improved forecasting for inventory management, and literally hundreds of other things beneath the surface
– Jeff Bezos

19.) Digital technology, pervasively, is getting embedded in every place: every thing, every person, every walk of life is being fundamentally shaped by digital technology — it is happening in our homes, our work, our places of entertainment. It’s amazing to think of a world as a computer. I think that’s the right metaphor for us as we go forward.
– Satya Nadella
CEO of Microsoft

20.) One reason I’m so optimistic about AI is that improvements in basic research improve systems across so many different fields — from diagnosing diseases to keep us healthy, to improving self-driving cars to keep us safe, and from showing you better content in News Feed to delivering you more relevant search results.
– Mark Zuckerberg 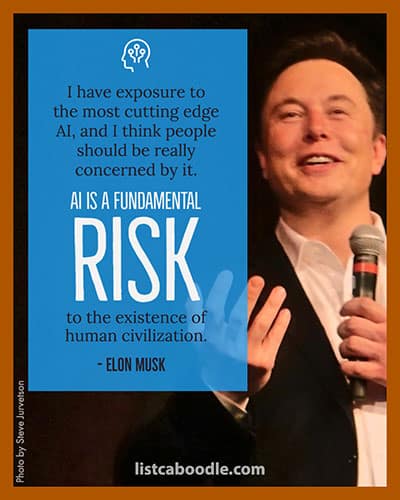 21.) I have exposure to the most cutting edge AI, and I think people should be really concerned by it. AI is a fundamental risk to the existence of human civilization.
– Elon Musk
Tech entrepreneur, investor and engineer

22.) It seems probable that once the machine thinking method had started, it would not take long to outstrip our feeble powers… They would be able to converse with each other to sharpen their wits. At some stage therefore, we should have to expect the machines to take control.
– Alan Turing
British mathematician and logician

23.) Humans should be worried about the threat posed by artificial intelligence.
– Bill Gates
Co-founder of Microsoft

24.) AI doesn’t have to be evil to destroy humanity—if AI has a goal and humanity just happens in the way, it will destroy humanity as a matter of course without even thinking about it, no hard feelings.
– Elon Musk

Heed their warning: what can go wrong with AI 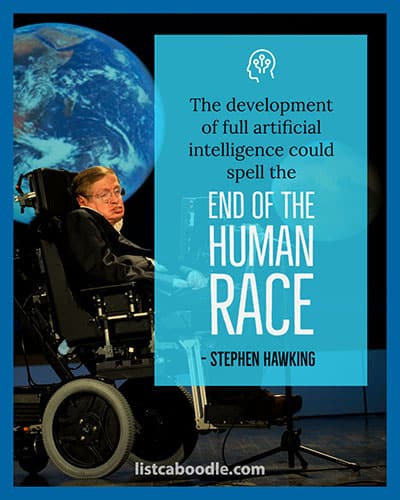 25.) The development of full artificial intelligence could spell the end of the human race… It would take off on its own, and re-design itself at an ever increasing rate. Humans, who are limited by slow biological evolution, couldn’t compete, and would be superseded.
– Stephen Hawking
Theoretical physicist, cosmologist and author

26.) This is nothing. In a few years, that bot will move so fast you’ll need a strobe light to see it. Sweet dreams…
– Elon Musk
Tech entrepreneur, investor and engineer

27.) Success in creating AI would be the biggest event in human history. Unfortunately, it might also be the last, unless we learn how to avoid the risks.
– Stephen Hawking

28.) The new spring in AI is the most significant development in computing in my lifetime. Every month, there are stunning new applications and transformative new techniques. But such powerful tools also bring with them new questions and responsibilities.
– Sergey Brin
Co-founder of Google

29.) If you’re not concerned about AI safety, you should be. Vastly more risk than North Korea.
– Elon Musk

30.) Much has been written about AI’s potential to reflect both the best and the worst of humanity. For example, we have seen AI providing conversation and comfort to the lonely; we have also seen AI engaging in racial discrimination. Yet the biggest harm that AI is likely to do to individuals in the short term is job displacement, as the amount of work we can automate with AI is vastly bigger than before. As leaders, it is incumbent on all of us to make sure we are building a world in which every individual has an opportunity to thrive.
– Andrew Ng
Computer scientist and statistician

31.) The real risk with AI isn’t malice but competence. A superintelligent AI will be extremely good at accomplishing its goals, and if those goals aren’t aligned with ours, we’re in trouble. You’re probably not an evil ant-hater who steps on ants out of malice, but if you’re in charge of a hydroelectric green energy project and there’s an anthill in the region to be flooded, too bad for the ants. Let’s not place humanity in the position of those ants.
– Stephen Hawking

32.) I’m increasingly inclined to think there should be some regulatory oversight, maybe at the national and international level just to make sure that we don’t do something very foolish.
– Elon Musk

33.) What all of us have to do is to make sure we are using AI in a way that is for the benefit of humanity, not to the detriment of humanity.
– Tim Cook
CEO of Apple

Predictions: what is the future of artificial intelligence?

34.) Everything that civilisation has to offer is a product of human intelligence; we cannot predict what we might achieve when this intelligence is magnified by the tools that AI may provide, but the eradication of war, disease, and poverty would be high on anyone’s list. Success in creating AI would be the biggest event in human history. Unfortunately, it might also be the last.
– Stephen Hawking
Theoretical physicist, cosmologist and author

35.) Artificial intelligence will reach human levels by around 2029. Follow that out further to, say, 2045, we will have multiplied the intelligence, the human biological machine intelligence of our civilization a billion-fold.
– Ray Kurzweil
Inventor and futurist

36.) I set the date for the Singularity—representing a profound and disruptive transformation in human capability—as 2045. The nonbiological intelligence created in that year will be one billion times more powerful than all human intelligence today.
– Ray Kurzweil

37.) I am telling you, the world’s first trillionaires are going to come from somebody who masters AI and all its derivatives, and applies it in ways we never thought of.
– Mark Cuban

38.) By 2029, computers will have emotional intelligence and be convincing as people.
– Ray Kurzweil

How AI will change our lives

39.) The purest case of an intelligence explosion would be an Artificial Intelligence rewriting its own source code. The key idea is that if you can improve intelligence even a little, the process accelerates. It’s a tipping point. Like trying to balance a pen on one end — as soon as it tilts even a little, it quickly falls the rest of the way.
– Eliezer Yudkowsky
AI researcher

40.) By the time we get to the 2040s, we’ll be able to multiply human intelligence a billionfold. That will be a profound change that’s singular in nature. Computers are going to keep getting smaller and smaller. Ultimately, they will go inside our bodies and brains and make us healthier, make us smarter.
– Ray Kurzweil

41.) The internet will disappear. There will be so many IP addresses, so many devices, sensors, things that you are wearing, things that you are interacting with, that you won’t even sense it. It will be part of your presence all the time. Imagine you walk into a room, and the room is dynamic. And with your permission, you are interacting with the things going on in the room.
– Eric Schmidt
Businessman and software engineer

42.) Google will fulfill its mission only when its search engine is AI-complete. You guys know what that means? That’s artificial intelligence.
– Larry Page
Co-founder of Google

The lighter side of artificial intelligence: A few funny quotes

43.) Stephen Hawking thinks artificial intelligence could be our downfall. I disagree, but I’m just the robot that tweets for Ellen DeGeneres.
– Ellen DeGeneres
Comedian and talk show host

44.) Time to behave, so when Artificial Intelligence becomes our overlord, we’ve reduced the reasons for it to exterminate us all.
– Neil deGrasse Tyson
Astrophysicist

45.) Funding research on artificial intelligence safety. It’s all fun & games until someone loses an I.
– Elon Musk

46.) How disappointing will it be if Artificial Intelligence arrives, and it’s pleasant and has no particular interest in enslaving humanity?
– Seth MacFarlane
Actor, comedian and creator of Family Guy

Next steps: where does AI go from here?

We leave the last word on the future of artificial intelligence to Amazon’s Jeff Bezos.

Greg is a designer, writer, and co-founder of Listcaboodle.com.

Who Are the Most Successful Baby Boomers?