They are the villains and murderers of Hollywood movies, the unsuspecting loner who turns out to be a deranged mad man. Their names may not even appear on the cinema marquee. Without leading man looks, they are often relegated to lesser roles in movies and television. They are the creepy character actors of Hollywood.

Here are 11 famous creepy character actors who made their mark in movies and television with their incredible acting talent.

Peter Lorre burst on to the scene with his role as the child killer Hans Beckert in Fritz Lang’s 1931 movie M. His raspy, accented voice and bulging eyes made him the perfect loner, assassin and foil in American films.

In Mad Love, Lorre shaved his head to play the role of the creepy and demented Dr. Gogol. Describing Lorre’s ability to steal the scene, The Hollywood Reporter commented, “There is perhaps no one who can be so repulsive and so utterly wicked. No one who can smile so disarmingly and still sneer. His face is his fortune.”

Lorre’s successful career included appearances in movies by famed directors John Huston (The Maltese Falcon), Frank Capra (Arsenic and Old Lace) and Alfred Hitchcock (The Man Who Knew Too Much).

Boris Karloff became the leading star of the Universal Studios monsters, along with rival actor Bela Lugosi. Karloff’s work in the film went largely unnoticed until, like the monster in Frankenstein, he gave audiences his breakout performance—a terrifying and at times touching portrayal of the man/beast created at the hands of a mad scientist. He became internationally known.

Karloff would go on to star in two sequels, Bride of Frankenstein and Son of Frankenstein. His resume of classic horror films includes The Mummy, The Mask of Fu Manchu, The Black Cat and Tower of London and many others.

In the 1960s, Karloff hosted the horror/suspense television series Thriller, along with the British science fiction series Out Of This World. In his later years, Karloff found several non-horror based roles on television and in movies. He even found a new, younger audience by narrating the Dr. Seuss animated film How the Grinch Stole Christmas and providing voice work for the Grinch himself. Karloff finished his career with roles in several low-budget Mexican horror films. He died from emphysema before the movies were released.

“The Universal Monsters” were monster characters in films made by Universal Studios from the 1920s to the 1950s. They include The Hunchback of Notre Dame, The Phantom of the Opera, Dracula, Frankenstein, The Mummy, The Invisible Man, The Wolf Man and Creature from the Black Lagoon. These films featured famous horror movie actors Lon Chaney, Boris Karloff, Bela Lugosi, Lon Chaney Jr. and others.

Bela Lugosi was born to play Count Dracula. His chilling portrayal in Dracula, highlighted by his penetrating stare and Hungarian accent, mesmerized audiences in rapt fear.

The horror villain with the foreign accent was a perfect fit for him in movies like Murders in the Rue Morgue.

Throughout his career, Lugosi maintained a competitive professional relationship with fellow star Boris Karloff but never was able to take top billing from him. Films featuring the two Universal Studios stars include The Black Cat, The Raven, and Son of Frankenstein.

Later in life, Lugosi developed an addiction to morphine and methadone from medical treatments for chronic nerve pain. He played Dracula again (and for the last time) in his last major motion picture, Abbott and Costello Meet Frankenstein in 1948. Towards the end, movie roles became scarce and he was only offered a few parts in low budget and B-movies like Plan 9 from Outer Space. He died of a heart attack at age 73. He was buried wearing his Dracula costume.

The enigmatic Peter Sellers was a comic genius and a gifted actor. His versatile acting ability brought satire, dark humor and eccentricity to each character he played.

Sellers was a self-described chameleon of sorts. He claimed to have no identity other than the roles he played on film and television. He brought a complexity of darkness to characters like Clare Quilty in Stanley Kubrick’s Lolita and the title role in Dr. Strangelove. Other films highlighting his artistic range include I’m All Right Jack, What’s New, Pussycat?, Casino Royale, The Party and Being There.

In 1963 Sellers starred in his signature role in The Pink Panther, portraying the bumbling Inspector Clouseau. He would go on to film two sequels, The Return of the Pink Panther and The Pink Panther Strikes Again. Many have compared Sellers’ creative genius to that of Charlie Chaplin. The Daily Mail said of the actor, once he had locked in on a comic idea, he “loved nothing more than to carry it to extremes.”

Vincent Price haunted audiences with his distinctive voice and menacing look. He broke into the horror film genre in Tower of London with Boris Karloff and the next year starred in the lead role in The Invisible Man Returns. He perfected his villainous persona with many horror films, including The Mad Magician, House of Wax and The Fly.

Price gained a new following when he appeared in the 1960’s Batman television series as the villain Egghead. He also made semi-regular appearances on episodes of the television game show Hollywood Squares from the 1960s to the final show in 1980. Price capitalized on his trademark voice with narration and voice work in recordings, including Edgar Allan Poe short stories and poems and musical albums Welcome to My Nightmare by Alice Cooper and Michael Jackson’s Thriller (the best-selling album of all time).

Vincent Price made one of his last appearances as The Inventor in Tim Burton’s Edward Scissorhands in 1990. He died of lung cancer after a lifetime of smoking at age 82. 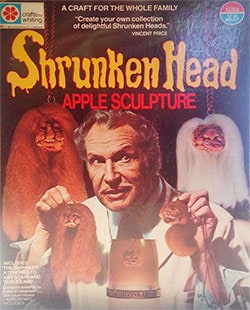 Vincent Price appeared in commercials and on packaging for the strange Milton Bradley kids’ toy, the Shrunken Head Apple Sculpture kit in the mid-1970s.

John Carradine is one of the most prolific character actors in movie history. The Shakespearean actor with the long face, squinty eyes, and distinctive voice was a perfect fit for westerns and horror films.

The eccentric and diabolical characters he played made him a star of the horror film genre in the 1940s, including The Mummy’s Ghost, Return of the Ape Man, House of Frankenstein and House of Dracula.

Four of Carradine’s sons and four grandchildren became actors themselves, including son David Carradine (from the television series Kung Fu). The prolific actor is credited with 225 movie appearances over his career.

Jack Elam’s trademark squint made him the perfect villain in western movies and gangster films. He had a look of danger and unpredictability, enhanced by the loss of his left eye in a childhood accident.

Elam landed 73 movie roles over his career, including notable appearances in the spaghetti western Once Upon a Time in the West, High Noon and Support Your Local Sheriff. He found work on TV too. One of his famous roles was the crazy bus passenger on The Twilight Zone episode “Will the Real Martian Please Stand Up?”

Rondo Hatton became interested in acting late in life. He began as a writer for the Tampa Tribune and eventually dabbled in a few B-movies. It was not until the last two years of his life that Universal Studios offered him starring roles in a few horror films. He became a cult icon after his death at age 51.

Hatton’s distinct facial features were the result of acromegaly, a pituitary gland syndrome causing excess growth hormone. He became known as the “ugliest man in pictures.”

Hatton played his most memorable role as The Creeper in House of Horrors and The Brute Man, both released after his death. Hatton’s legacy is honored each year by his name and likeness on the Rondo Hatton Classic Horror Awards, given to members of the horror film industry.

In Mel Brooks’ comedy classic Young Frankenstein, Feldman played Igor. Feldman’s eyes provided an ongoing source of punch lines in the film (after Gene Wilder’s character exclaims his name is pronounced “Fronkenschteen,” Feldman dryly shoots back that his name is “EYE-gore.”) Both Brooks and Wilder believed Marty Feldman’s performance was the heart of the movie.

Feldman died at age 48 of shellfish poisoning in Mexico City.

He acted and voiced several Walt Disney films, including the role of the eccentric Uncle Albert in Mary Poppins.

Wynn was able to break out of his comic typecasting later in his career, playing a dramatic role in the film The Diary of Anne Frank in 1959 to great acclaim. That same year he played a dying street merchant on Rod Serling’s The Twilight Zone episode “One for the Angels.” The role brought more dramatic acting opportunities his way for the rest of his life. Wynn would even perform with his son Keenan Wynn on television and in film.

“The Swedish Angel” was a large man. The former professional wrestler weighed 387 pounds and stood 6’3” tall. His size and intimidating, zombie-like stare were a perfect fit for “B-movie” sci-fi and horror films of the 1950s. But friends and costars knew the real man as kind-hearted and lovable. Tor’s signature role as Inspector Clay in the Ed Wood cult classic Plan 9 from Outer Space. He had a short film career but remains one of the most memorable creepy actors of Hollywood.

You will recognize these creepy actors and actresses from their roles in movies and television. They play serial killers and psychopaths so well we sometimes forget they are not that way in real life. You may even recognize some names from their work doing voice-overs for video games.

Brad Dourif (Grima Wormtongue in The Lord of the Rings)

Check out these famous and spooky Halloween songs

Heath Ledger (The Joker in The Dark Knight)

Ted Levine (Buffalo Bill from Silence of the Lambs)

Creepy character actors A to Z

These odd and creepy character actors are often overlooked and under-appreciated when viewed with the great stars of Hollywood. But their acting talent often outshines their leading man and woman co-stars. We honor their skills in providing horror, making us laugh, and adding depth to our favorite movies and TV shows.

Greg is a writer, designer, and co-founder of Listcaboodle.

and Everything You Need to Know About Bollywood Movies and Music