Learn from the man who said, "An unexamined life is not worth living."

These Socrates quotes reveal a philosopher of considerable insight and knowledge. Considered by most to be the founding father of western philosophy, Socrates lives from 469 – 399 B.C.

He grew up in Athens and in his younger life served with distinction as a soldier. But, it was his teaching of young men in Athens where he became famous. His style of teaching bears his name, The Socratic method. It is characterized by asking question after question of students until they arrive at their own understanding of a concept. Traditional teaching methods featured lecturing of facts and ideas.

He was not a writer and apparently wrote nothing down on paper, so all that we know about him comes from other folks, mostly his students (notably Plato), writings. Some historians compare Socrates’ life to Jesus Christ. All that we know about Jesus comes from the gospel writers.  Like Jesus, Socrates was sentenced to death by government officials. Socrates was charged with corrupting youth with his ideas and was forced to drink poisonous hemlock as his sentence.

Socrates is revered among philosophers for the saint-like way he led his life. He is remembered for his passion, logic, and innovative ideas demonstrated through his hair-splitting questioning technique.

When one man has said so many important things of distinction, it’s hard to limit the number down to a manageable quantity. But, we decided on the 17 best things he ever said. So, let’s begin. 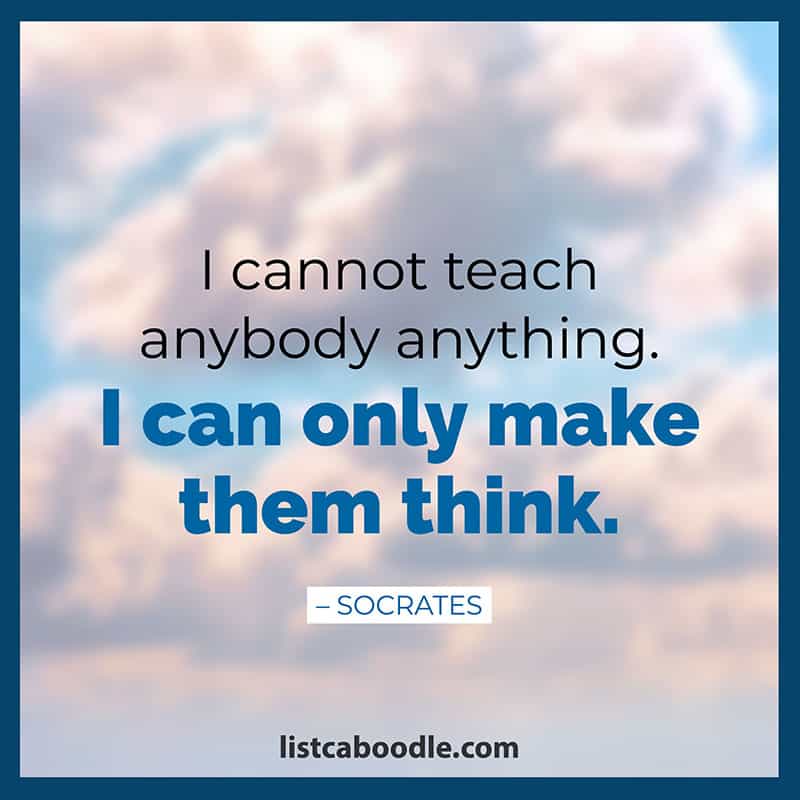 1.) I cannot teach anybody anything. I can only make them think.

The lament of many a teacher which means that students must come to learnings on their own. A good instructor, however, can help the process along. 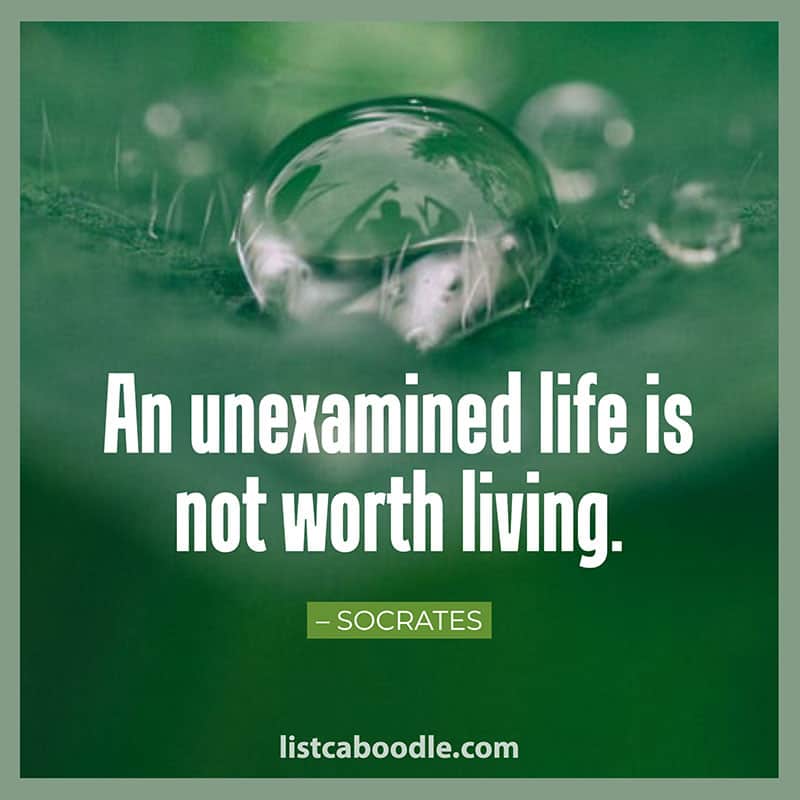 2.) An unexamined life is not worth living.

Perhaps Socrates’ most famous quote. It calls out the need for each individual to practice self-reflection. 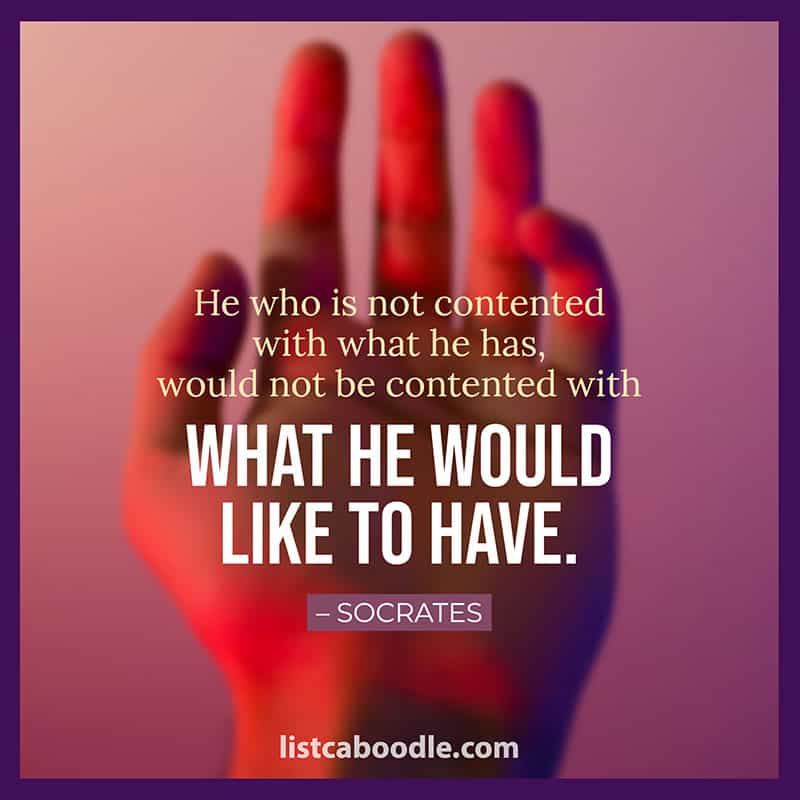 Gratitude is all about your attitude. Be thankful for what you own, not what you wish you owned. 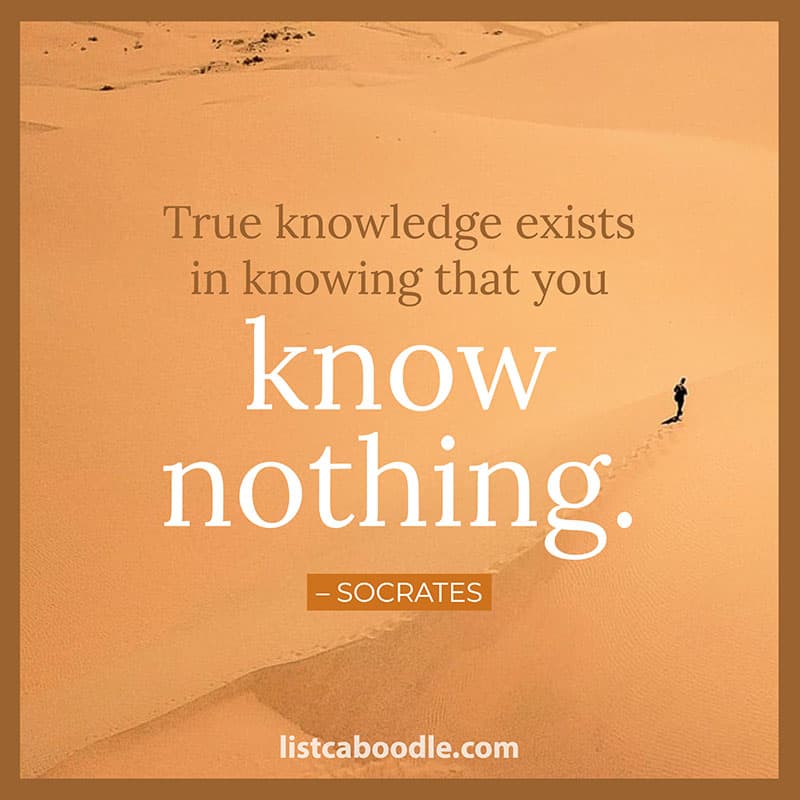 4.) True knowledge exists in knowing that you know nothing.

The greatest scholars have learned by continuing to study how little they know. This type of attitude encourages additional study. 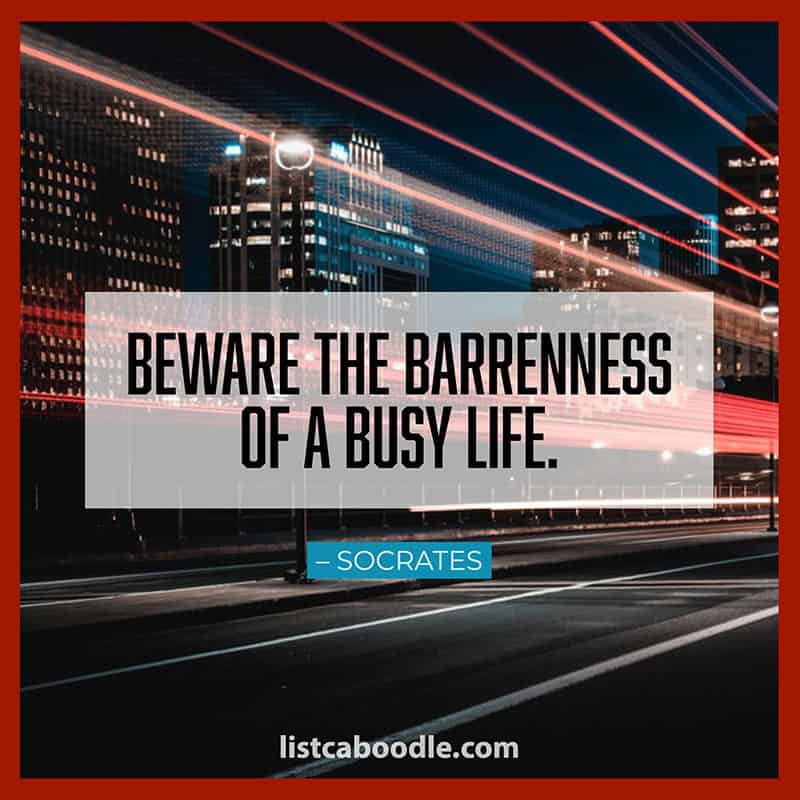 5.) Beware the barrenness of a busy life.

Being too active leads to little time for self-care and reflection. The primary message here: make sure to carve out enough time in your days for these important activities. 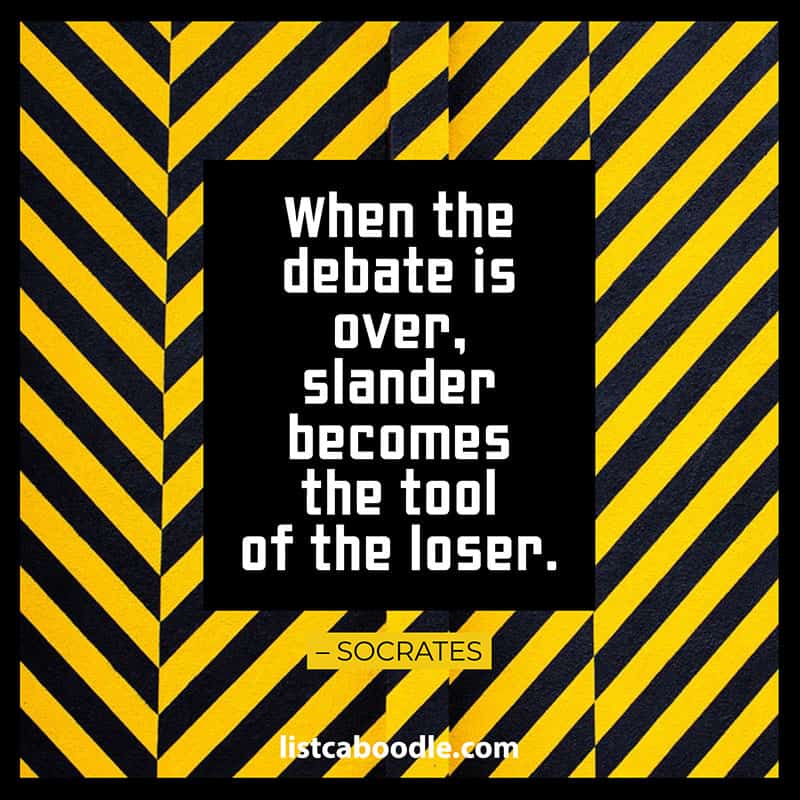 Socrates covered a lot of topics and had meaningful things to say about many things.

6.) When the debate is over, slander becomes the tool of the loser.

If you follow politics, you know the above statement rings true. When folks cannot win on the merit of their oratory skills, they fall back to the childish behavior of a bully and criticize the winner. 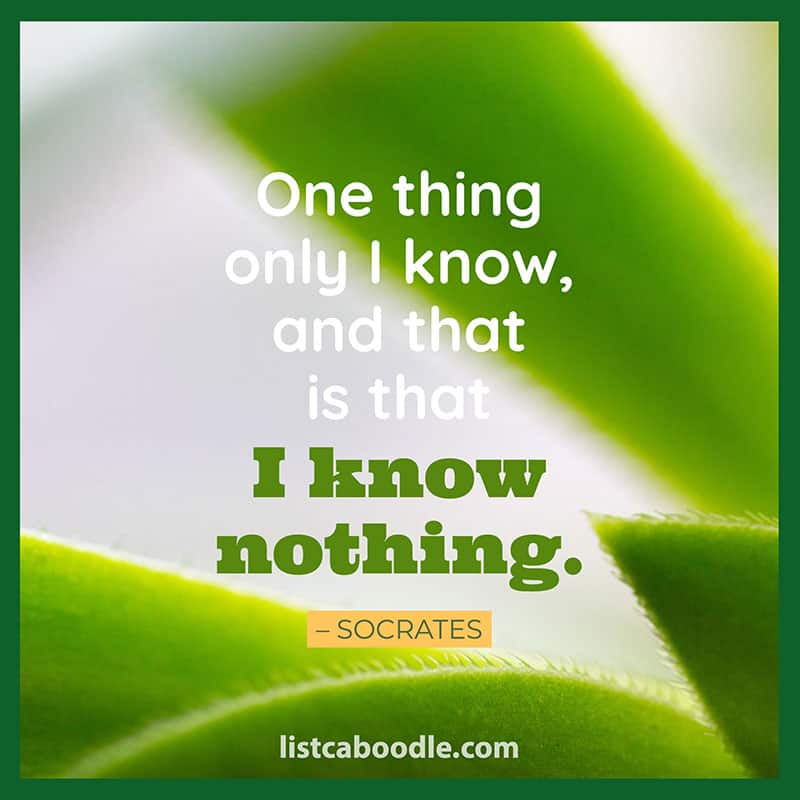 7.) One thing only I know, and that is that I know nothing.

There is so much to learn in life. It seems to be the more you study the more you realize how much there is to learn.

8.) To find yourself, think for yourself.

One cannot depend on others for the most essential role of thinking and applying your thoughts in your personal matters. 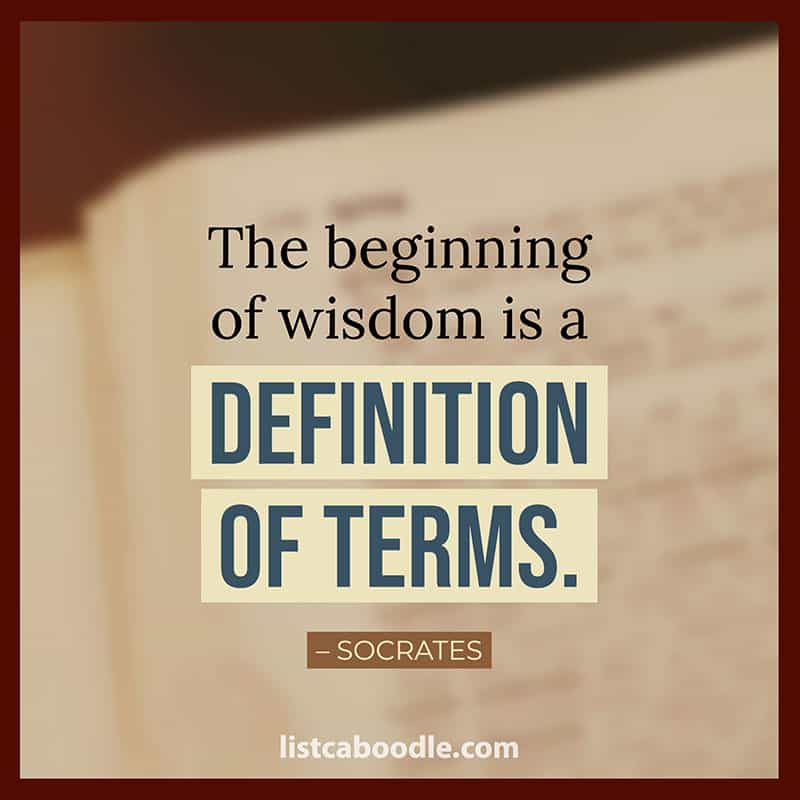 9.) The beginning of wisdom is a definition of terms.

Knowledge of many things begins with an understanding of the core definitions of the field of study. From science to math, it starts with knowing the lingo. 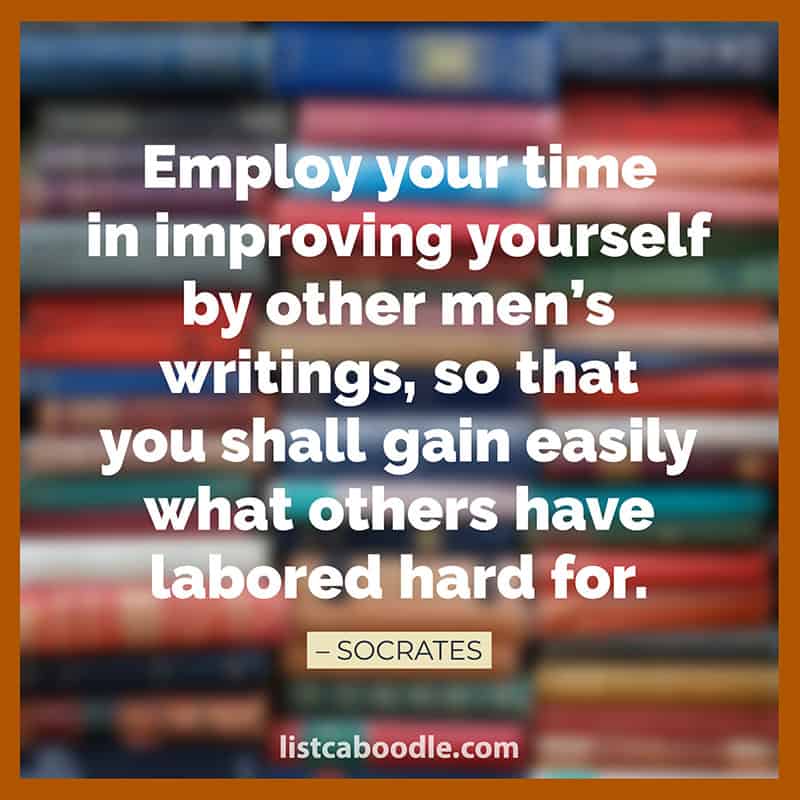 10.) Employ your time in improving yourself by other men’s writings, so that you shall gain easily what others have labored hard for.

Learning from others shortens the learning curve dramatically. Take advantage of others’ mistakes, so that you don’t also have to make them.

People can do so much good in this world with the right attitude and effort. 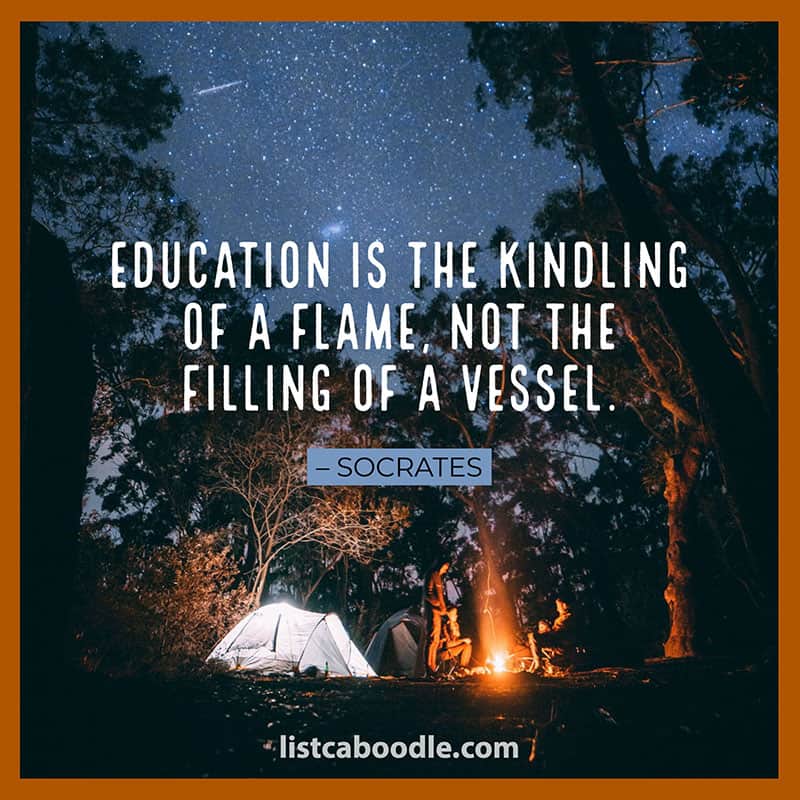 The wise teacher was able to convey so much meaning in so few words.

12.) Education is the kindling of a flame, not the filling of a vessel.

A continuing theme for Socrates involved the need for lifelong learning. This Socrates’ quote captures that spot on. 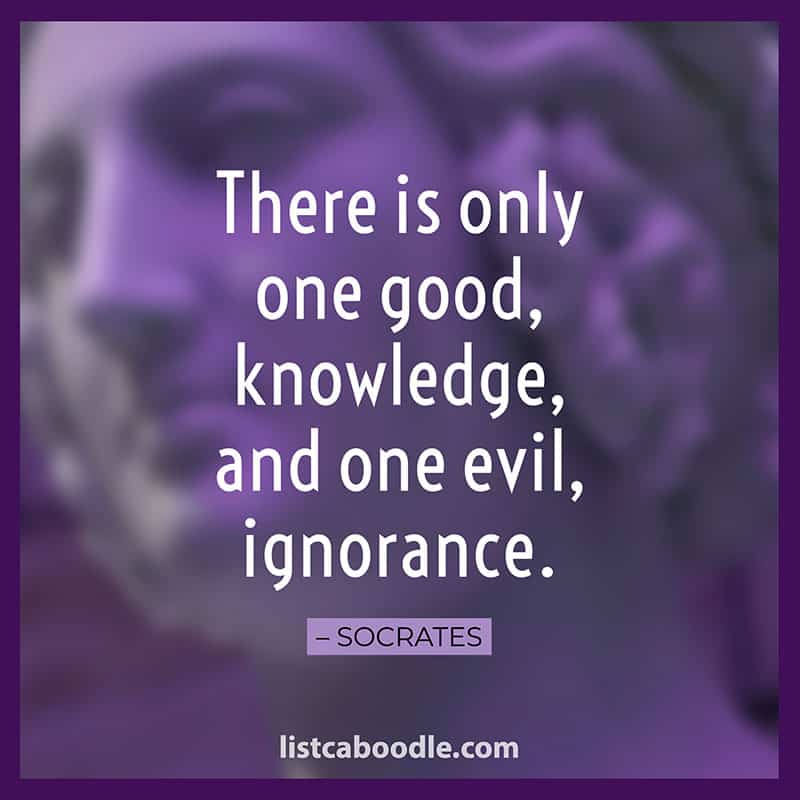 13.) There is only one good, knowledge, and one evil, ignorance.

For a teacher like Socrates, the acquisition of knowledge was his lifelong goal. He wanted others to share his vision. 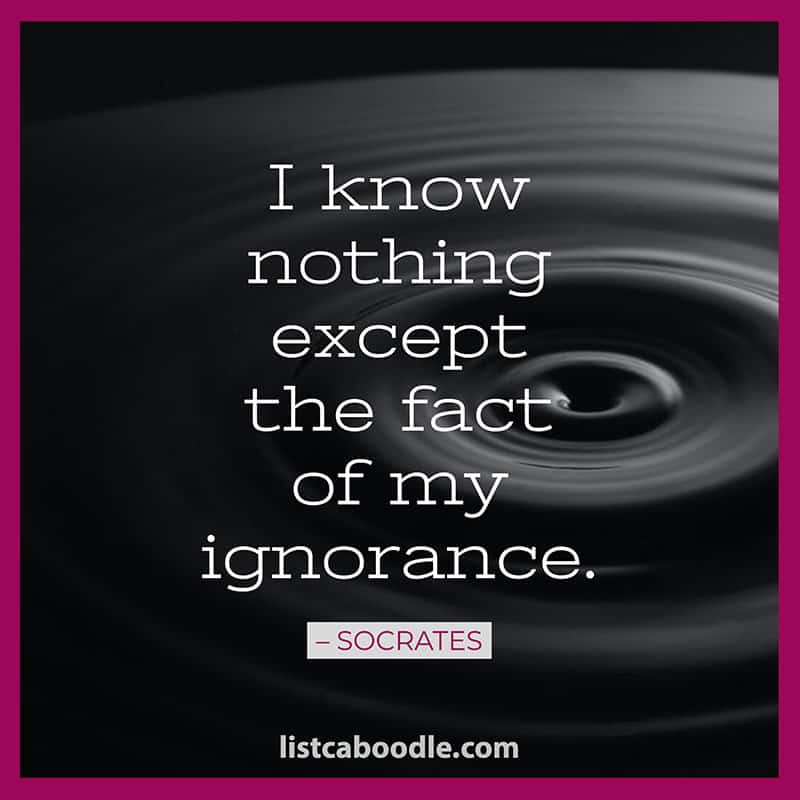 14.) I know nothing except the fact of my ignorance.

Because Socrates was so focused on his learnings he was constantly reminded of how little he knew of so many subjects. 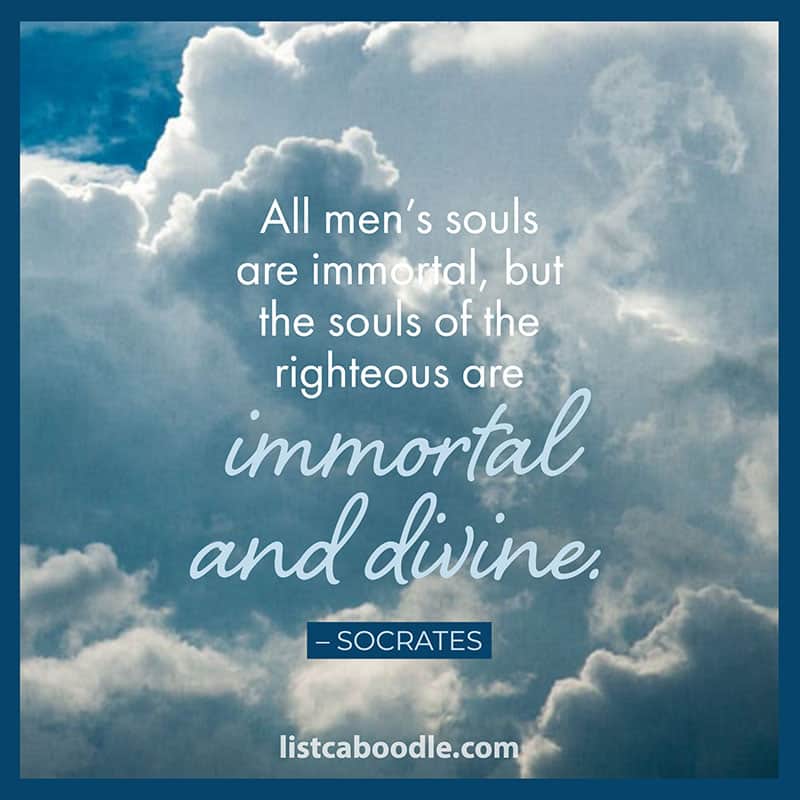 Socrates’ belief was that folks who lived the good life rose to higher levels and lived forever. 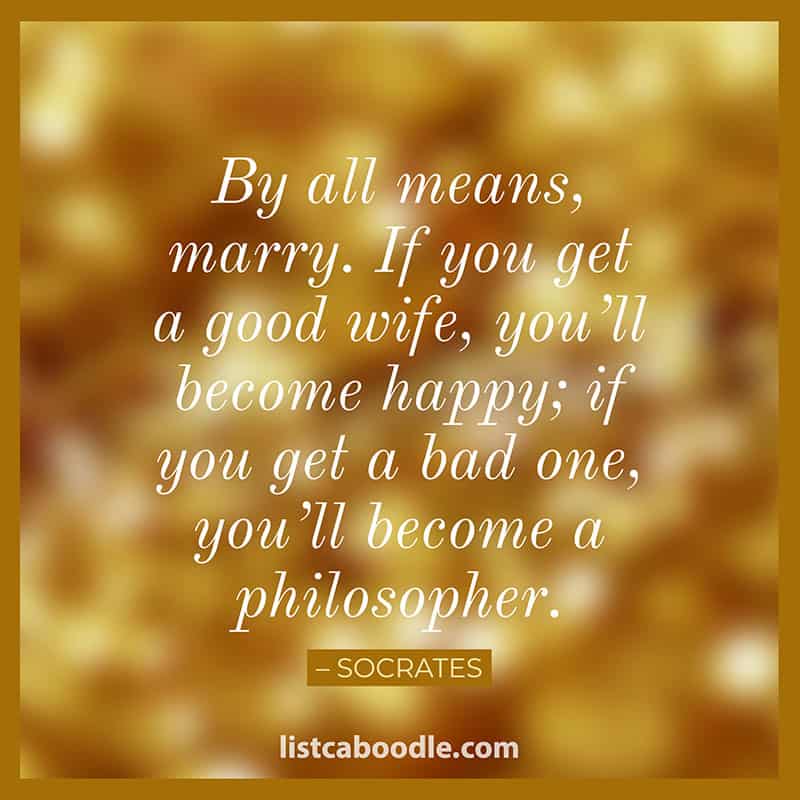 Perhaps this spoke to Socrates’ unhappiness with his own marriage as much as anything. His wife Xanthippe was noted for being troublesome and argumentative. Socrates was probably not the best of husbands either. He spent most of his awake hours studying and teaching. 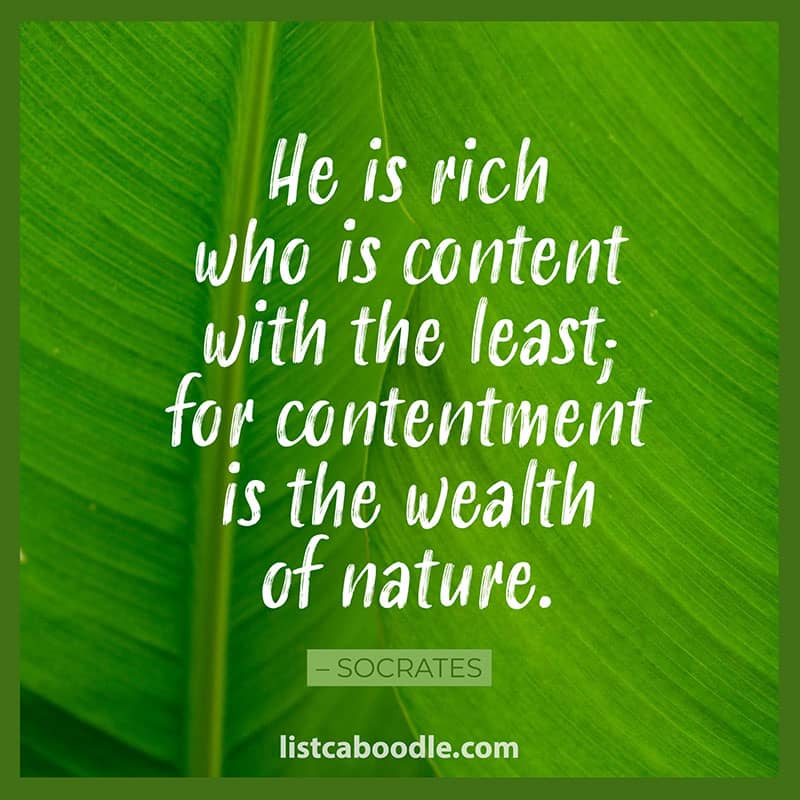 17.) He is rich who is content with the least; for contentment is the wealth of nature.

Those who can amuse themselves with fewer things are the happiest. They are not dependent on objects for their joy in life.

Check out these famous calm quotes and sayings.

Socrates’ emphasis was on the importance of the mind and not physical beauty. He believed in self-reflection. He thought a man could only attain true wisdom by knowing himself.

Socrates did not have a separate classroom to provide his instruction. Rather, he traveled all over the city of Athens and taught – or, perhaps better put, asked questions. Socrates was married and had three children.

Due to his lasting impact on thought and philosophy, many schools of philosophy claim him as one of their own. But, there is only one Socrates! We hope you enjoyed this short introduction to Socrates. Continued study will result in more knowledge.

You are on the Socrates Quotes, Sayings, Images page.

The Cowboy Philosopher: Will Rogers Quotes

The Japanese Celebration of Cuteness: Kawaii