These 60 song quotes and sayings will surely inspire singers of all types. Included are insightful words from artists, musicians, and celebrities. Read on and let the words be your muse!

Song quotes to leave you singing in the shower

Here are some of the best song quotes and singing sayings we’ve found. Enjoy! 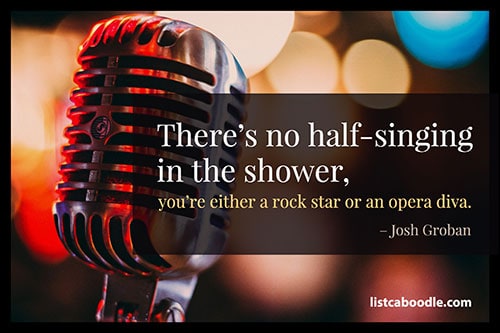 There’s no half-singing in the shower, you’re either a rock star or an opera diva.
Josh Groban

If I cannot fly, let me sing.
Stephen Sondheim

Without music, life would be a mistake.
Friedrich Nietzsche

We don’t just sing; we are the song.
Louise Penny

He who sings frightens away his ills.
Miguel de Cervantes 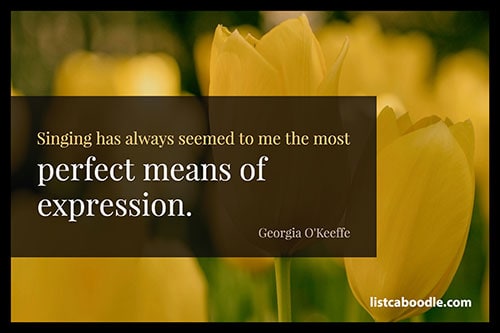 Singing has always seemed to me the most perfect means of expression.
Georgia O’Keeffe

The only thing better than singing is more singing.
Ella Fitzgerald

To sing is to bring to the surface all the depth of one’s being.
Marty Rubin

The greatest respect an artist can pay to music is to give it life.
Pablo Casals 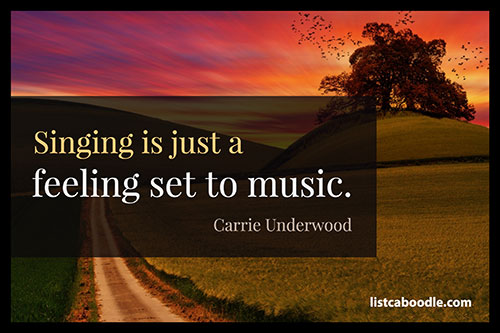 Singing is just a feeling set to music.
Carrie Underwood

He who sings scares away his woes.
Cervantes

Singing provides a true sense of lightheartedness. If I sing when I am alone, I feel wonderful. It’s freedom.  Andrea Bocelli

Let us go singing as far as we go: the road will be less tedious.
Virgil

Every voice has its own beauty.
Asif Imtious Prome 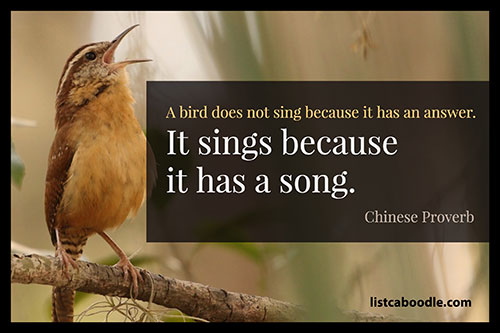 Love, I find, is like singing.
Zora Neale Hurston

Singing is a way of escaping. It’s another world. I’m no longer on earth.
Edith Piaf

I love singing. I love it, and it doesn’t feel like a chore. It’s an expression.
Rihanna

A song to me is a very tangible thing. I can feel it with my hands and see it with my eyes.
Roberta Flack 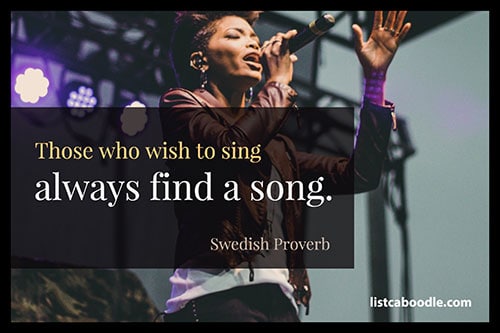 Those who wish to sing always find a song.
Swedish Proverb

Be like the bird that, passing on her flight awhile on boughs too slight, feels them give way beneath her, and yet sings, knowing that she hath wings.
Victor Hugo

A song can be more than words and music … when sung with soul a song carries you to another world, to a place where no matter how much pain you feel, you are never alone.
Clay Aiken

You don’t need a reason to sing.
Marty Rubin

Sing then the core of dark and absolute oblivion where the soul at last is lost in utter peace.
D. H. Lawrence 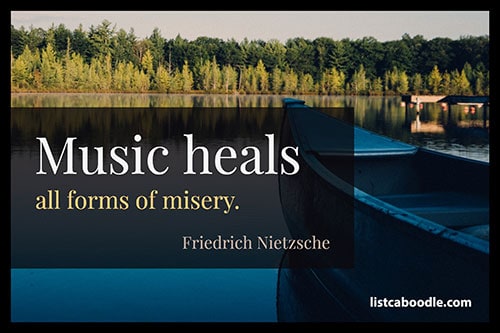 When a singer truly feels and experiences what the music is all about, the words will automatically ring true.  Monserrat Caball

Sweetest the strain when in the song
The singer has been lost.
Elizabeth Stuart Phelps

There was one emotional outlet my people always had when they had the blues. That was singing.
Ethel Waters

Singing is the sound of the soul.
James Runcie

Some days there won’t be a song in your heart.  Sing anyway.
Emory Austin

The singer has everything within him.  The notes come out from his very life.  They are not materials gathered from outside.
Rabindranath Tagore 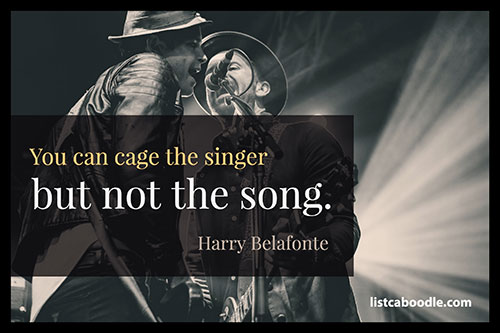 You can cage the singer but not the song.
Harry Belafonte

A singer… is no more than an actor set to music.
Kay Starr

Use what talents you possess; the woods would be very silent if no birds sang there except those that sang best.
Henry Van Dyke

I don’t sing because I’m happy; I’m happy because I sing.
William James

God sent his Singers upon earth
With songs of sadness and of mirth,
That they might touch the hearts of men,
And bring them back to heaven again.
Henry Wadsworth Longfellow

O! she will sing the savageness out of a bear.
William Shakespeare 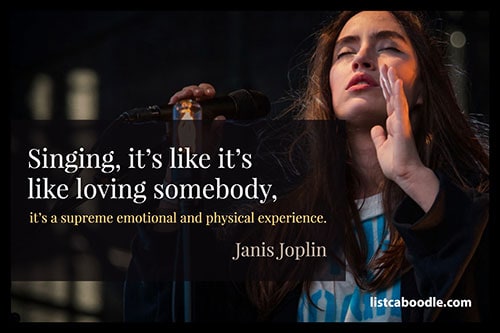 God respects me when I work, but God loves me when I sing.
Rabindranath Tagore

As long as we live, there is never enough singing.
Martin Luther

It was his nature to blossom into song, as it is a tree’s to leaf itself in April.
Alexander Smith

Singing is a miracle. It has been called the most complex coordinative act that a human being is ever called upon to perform.
Dan Marek 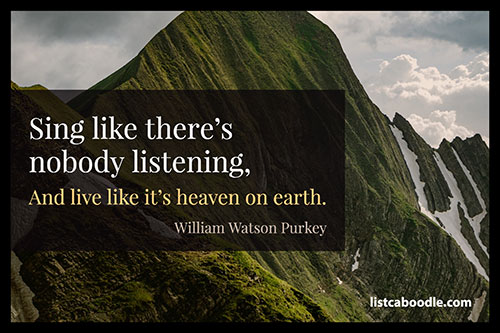 Faith and joy are the ascensive forces of song.
Edmund Clarence Stedman

That music in itself, whose sounds are song,
The poetry of speech.
Lord Byron

Life is a song. Love is the music.
Author Unknown

Hope is the thing with feathers that perches in the soul—and sings the tunes without the words—and never stops at all.
Emily Dickinson 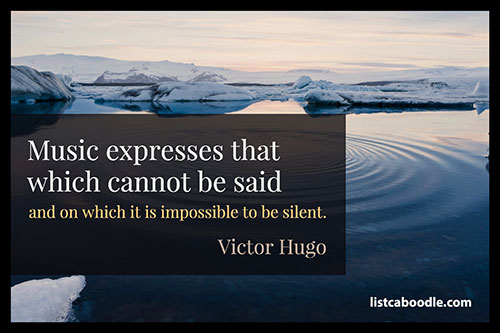 Music expresses that which cannot be said and on which it is impossible to be silent.
Victor Hugo

Keep a green tree in your heart and perhaps a singing bird will come.
Chinese Proverb

Birds sing after a storm; why shouldn’t people feel as free to delight in whatever remains to them?
Rose F. Kennedy 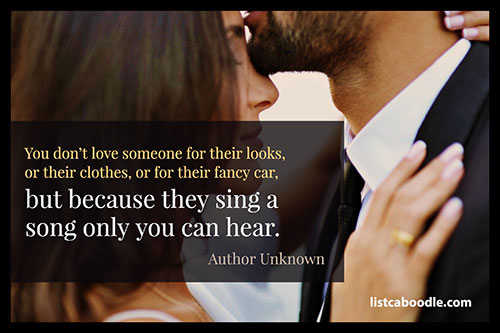 You don’t love someone for their looks, or their clothes, or for their fancy car, but because they sing a song only you can hear.
Author Unknown

I would rather be remembered by a song than by a victory.
Alexander Smith

Such songs have power to quiet
The restless pulse of care,
And come like the benediction
That follows after prayer.
Henry Wadsworth Longfellow

Enjoy your life. No curse hangs over you, nor did it ever. No devil chases after your soul. Sing and dance and be merry.
Christopher Pike 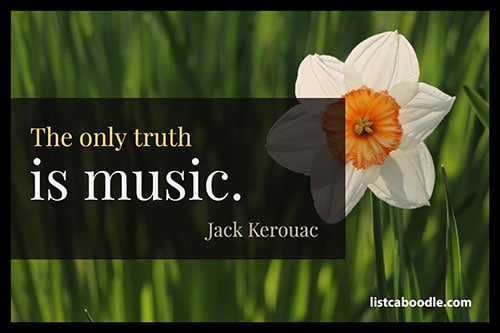 Music should strike fire from the heart of man, and bring tears from the eyes of woman.
Ludwig van Beethoven

Without music, life would be a blank to me.
Jane Austen

Eating, loving, singing and digesting are, in truth, the four acts of the comic opera known as life, and they pass like bubbles of a bottle of champagne. Whoever lets them break without having enjoyed them is a complete fool.
Gioachino Rossini

The only truth is music.
Jack Kerouac

Learning music by reading about it is like making love by mail.
Luciano   Pavarotti

The trouble with music appreciation, in general, is that people are taught to have too much respect for music. They should be taught to love it instead.
Igor Stravinsky 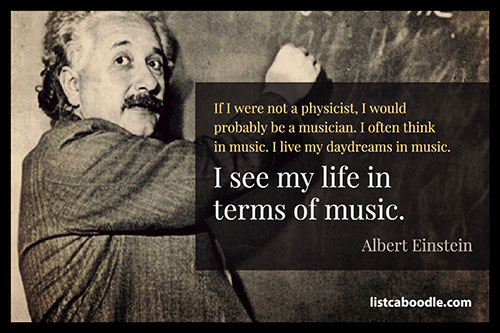 An opera begins long before the curtain goes up and ends long after it has come down. It starts in my imagination, it becomes my life, and it stays part of my life long after I’ve left the opera house.
Maria Callas

If you want to please only the critics, don’t play too loud, too soft, too fast and too slow.
Arturo Toscanini

Inspiration is an awakening, a quickening of all man’s faculties, and it is manifested in all high artistic achievements.
Giacomo Puccini 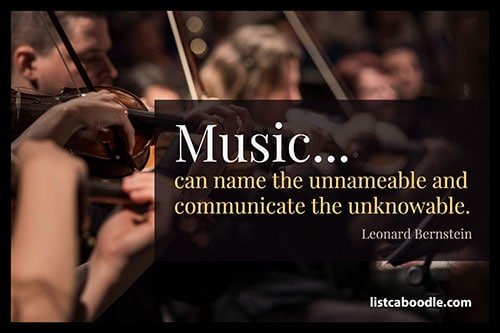 Music… can name the unnameable and communicate the unknowable.
Leonard Bernstein

There are two means of refuge from the miseries of life: music and cats.
Albert Schweitzer

If children are not introduced to music at an early age, I believe something fundamental is actually being taken away from them.
Luciano Pavarotti

Music in the soul can be heard by the universe.
Lao Tzu

A singer starts by having his instrument as a gift from God . . . when you have been given something in a moment of grace, it is sacrilegious to be greedy.
Marian Anderson

Music is like a dream. One that I cannot hear.
Ludwig van Beethoven 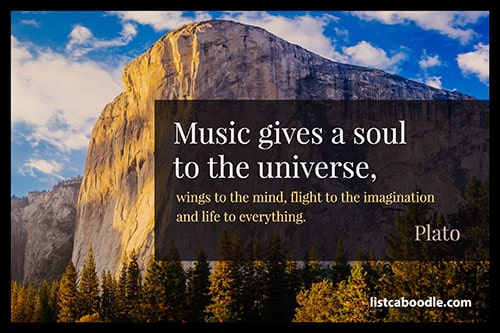 Music gives a soul to the universe, wings to the mind, flight to the imagination and life to everything.
Plato

We hope you have found inspiration in these music, singing and song quotes. Be sure to check out these other interesting music lists.

Greg is a designer, writer, and co-founder of Listcaboodle.

15 Famous Songs With Lists In The Lyrics

The Best Catholic Songs of All Time

15 Best Driving Songs: A Playlist for the Open Road