Do a Barrel Roll and 16 Amazing Google Easter Eggs

Who doesn’t like some great Google Easter eggs? It’s said that over time, every company’s offerings reflect the make-up of their workforce. You get the sense that the folks who work at Google have a sense of humor, enjoy knowledge, and are fun-loving.

Otherwise, why else would they include features shown in the Google Easter eggs listed below?

Google Do a Barrel Roll

Type in the phrase “Do a Barrel Roll” into your Google search bar, and lo and behold, the content on the page completes a 360-degree somersault. Yep, that’s what you call a Google Barrel Roll! Go ahead and try it. Like a Pringles potato chip, you just can’t try it once. This little trick could make your high school’s computer club squeal with delight. So, when bored or when you just need a break, here’s the formula: okay Google do a Barrel Roll.

The Bacon Number was developed based on the parlor game, “Six Degrees of Kevin Bacon.” Six degrees of separation is a concept that any two people on earth are six or fewer acquaintance links apart from each other. Since apparently Kevin Bacon has had so many starring roles in movies and TV shows, his name was linked to the parlor game.

Festivus is for the Rest of Us

Seinfeld fans will remember the non-commercial holiday celebration, Festivus, that is recognized on December 23. Created by George’s dad, the holiday includes a Festivus dinner, an unadorned Festivus pole, “the airing of grievances,” and “feats of strength.”

By entering “Festivus” into the Google search bar, you’re rewarded not only with the typical results, but also a Festivus pole on the left side of the results.

Can’t decide whether to make a run for the border with Taco Bell or to eat fresh at Subway? Let an impartial party decide.

Type in “flip a coin” and Google will do just that with an illustrated coin. Random results make it easy for folks without a change in their pocket.

A dreidel is a Jewish version of a teetotum, a gambling toy found in some European cultures. Traditionally, a dreidel takes the form of a wooden top with four sides. Each side bears a letter of the Jewish alphabet: Nun, Gimel, Hay, and Shin. The three letters in combination form an acronym that represents the phrase: a great miracle happened here.

Type in “Play Dreidel” into the Google search bar and an animated dreidel spins and lands on one of the sides.

Note: Nike has a show named “Easter Egg Air Force 1 Low” with pastel colors. But, no relation to these tricks.

What Are Google Easter Eggs?

The term Easter egg most commonly refers to decorated hard-boiled eggs created for an Easter celebration. But Easter eggs also refer to unexpected features of software programming or movies that are included as a bonus or a hidden message. The secret nature of this type of Easter egg adds to its charm. They are usually found as a result of Google searches, but sometimes can be found in settings.

Type in “animal sounds” or “what sound does a dog make” into the Google search bar and your results will feature choices for about 11 different animal sounds including a raccoon, a pig, an owl and the aforementioned do. This is a fun one to show young children.

This Easter egg is so simple and yet so brilliant. Type in the word “askew” and your whole page is tilted off-level upon hitting return as the name “askew” suggests. A classic!

The game solitaire, or Patience, refers to a series of card games that can be played alone as a single player. The game is believed to have Scandinavian or German roots, but its worldly reputation grew quickly becoming popular in France in the early 1800s.

Type in “Solitaire” into a Google search bar and your results will include an opportunity to play the game at the very top. You’ll be challenged by a worthy opponent – yourself!

An anagram is a name, word or phrase formed by rearranging letters of another. When you type “anagram” into the search bar on Google, the first thing you’ll see is a “Did you mean: nag a ram.” So, by searching for an anagram, you get an anagram in return. 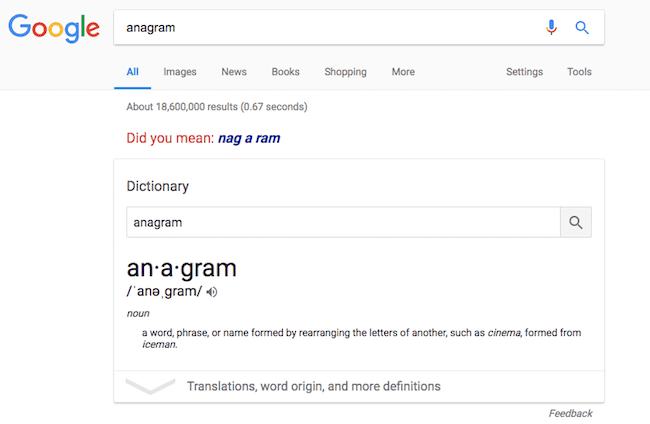 Ok, so you’re really bored at work but have access to the Internet. Type in “fun facts” into Google and you’ll have the chance to learn an interesting tidbit of info pulled from a variety of websites in a Q & A format. In our case, the question came back, “Is a squid considered a shellfish?” Practice up for your next trivia bar challenge by flipping through a few of these. Hit return to refresh and get a new fun fact. 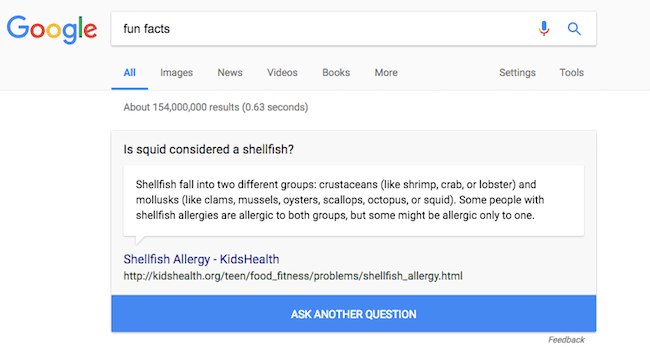 Zerg Rush is a game created by Google where little O’s destroy text unless they are clicked on with the user’s mouse. So, when you search for “Zerg Rush,” the O’s are released and start destroying your search engine results page. This is a type of attack associated with the game series StarCraft.

Searching “Pac-man” brings up the Pac-Man Doodle that was showcased on Google’s homepage in 2010. The arcade game Pac-Man was first released in Japan in 1980 and quickly took the world by storm. It’s considered an icon of the 1980s. The PacMan character has the highest brand awareness of any other video game character in the U.S. with a 94% awareness level.

To achieve a perfect score in the arcade game, you need to make it through level 256 with all of your lives available. The first person to accomplish this feat did it in about 6 hours time.

One of the language settings is “Pirate.” Go to your settings and switch from English to Pirate. Immediately the name “settings” switches to “Me Likes an’ Dislikes.”

And while you’re talking like a pirate, check out how to make a pirate map video.

Once in a Blue Moon — Google Easter Eggs

Searching for “once in a blue moon” will give you Google’s calculation for just how long that time period is. The meaning of the expression – very rarely – is put in quantitative terms by searching this result.

One of my favorites: A search of “Where is Chuck Norris” returns with the first result indicating that “Google won’t search Chuck Norris because it knows you don’t find Chuck Norris, he finds you.”

So, you know the formula now: type in Where is Chuck Norris?

Type in “answer to life, the universe and everything” into the search box and “42” comes back as the top result in a tribute to Douglas Adam’s Hitchhikers Guide to the Galaxy.

What is the Loneliest Number

Search for these games by name and an on-line version will pop up and enable you to play.

Type in I’m feeling curious into the search bar to play a little trivia game. Or, search for fun facts.

Do a search on Google in 1998 and it will take you to what Google looked like 20 years ago. And, let me tell you, it wasn’t as developed as it is now!

Is Google Down? — Google Easter Eggs

In the world of there are no dumb questions, this might actually be one. Remember, you’re typing this into the Google search feature so that you can that Google is up and running. Nevertheless, for those who are slow to catch on, here’s what you see: a short and direct answer.

A Metronome at your beck and call

Hey musicians, do you ever find yourself looking for a metronome. Look no further than Google. Here’s what it looks like. 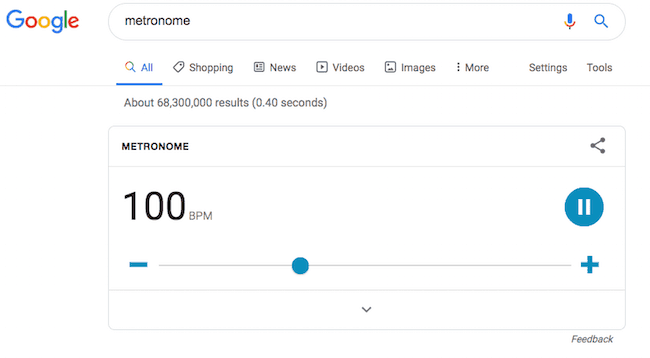 Type “Super Mario Bros” into Google with the volume of your computer turned on and you’ll be able to collect a coin, much like in the real game. There have to be a few gamers at Google headquarters. 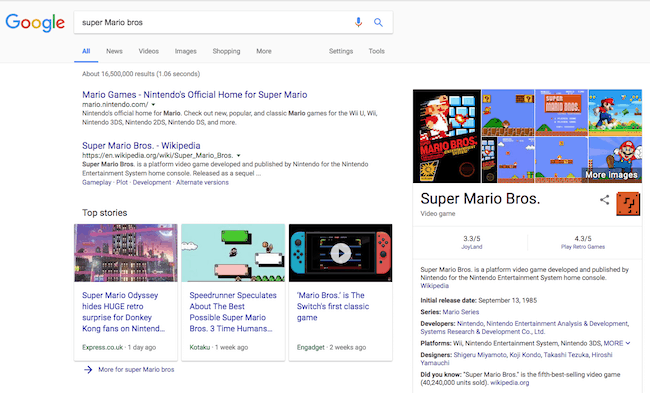 Conduct a search on Google for the phrase, “Baker’s Dozen,” and Google responds with “1 baker’s dozen = 13.” Bakers used the term for two reasons. First of all, in order to avoid fines of selling items that were underweight or quantity, a baker would include 13 items when a customer ordered a dozen. Rather than using the unlucky term “13,” they arrived at a “baker’s dozen.”

Type in “flip a coin” into the Google search bar, and the response will show an animated coin being flipped and either a heads or tails showing up. Need to decide who is making dinner tonight? Here’s a simple solution, assign heads and tails respectively to your partner and yourself. Then, just simply Google, “Flip a coin.”

We hope you enjoyed these. If you have any suggestions for additional ones, please let us know. Thanks!

John is a tech writer based in St. Paul, Minnesota.