M*A*S*H, Friends, Welcome Back Kotter, The Fresh Prince of Bel Air, and Many More

The best TV theme songs can bring back a flood of memories. Remember when you waited for the appointed hour to watch your favorite show? After a slew of commercials, suddenly, the theme song was playing and it was your cue to begin watching in earnest. If you weren’t singing word-by-word, you were usually at least humming along.

Well, we went back a bit and listened to a whole bunch of themes songs. We selected our favorites based on music quality, originality and fit to the visual aspects of the program and specifically, the opening. And so, we selected our best of the best. Enjoy! 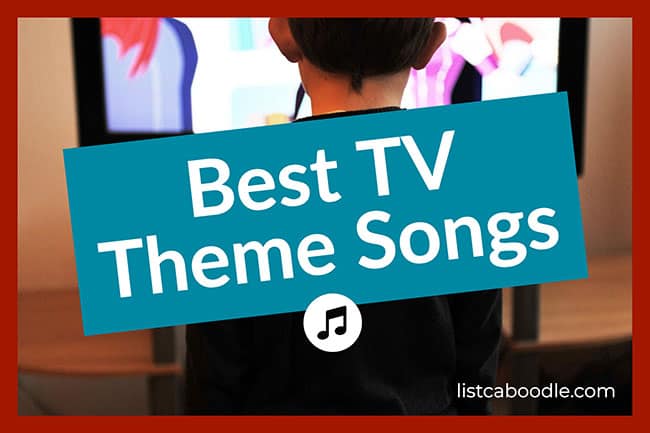 Here are our top favorites of all time. And, let me just say, there were some tough decisions to be made.

Written and sung by the Lovin’ Spoonful’s John Sebastian, “Welcome Back” reached the top spot on the Billboard Hot 100 chart in May of 1976. Because the TV lead’s name “Kotter” didn’t lend itself well to musical lyrics, Sebastian had a hard time writing the song at first. He decided to focus on the teacher’s return, and the result was this classic: “Welcome Back.”

Lyrics to “Welcome Back”

Yeah we tease him a lot ’cause we got him on the spot.

The song was written by Steve Barri and P.F. Sloan and performed by Johnny Rivers. The song eventually hit the #3 spot on the Billboard Hot 100. Rivers had more than a few other hits including, “Poor Side of Town,” “Baby I Need Your Lovin,” and “Summer Rain.”

Rivers was born John Henry Ramistella of Italian ancestry. Born in NYC, he along with his family moved to Baton Rouge. An agent convinced him to change his name to “Rivers” after the Mississippi which flows through Baton Rough.

There’s a man who leads a life of danger,
To everyone he meets he stays a stranger.
With every move he makes another chance he takes,
Odds are he won’t live to see tomorrow.

Beware of pretty faces that you find,
A pretty face can hide an evil mind.
Ah, be careful what you say
Or you’ll give yourself away,
Odds are you won’t live to see tomorrow.

Swingin’ on the Riviera one day,
And then layin’ in the Bombay alley next day.
Oh, don’t you let you let the wrong word slip,
While kissing persuasive lips,
Odds are you won’t live to see tomorrow.

Chico and the Man Theme

Jose Feliciano’s theme song is a classic. The show starred Freddie Prinze as Chico and Jack Albertson as the man.

Lyrics to Chico and the Man

“We’re the young generation, and we’ve got something to say,” is probably the signature line of this popular song. Written by Tommy Boyce and Bobby Hart, the song is loosely based on an old hit by the Dave Clark Five called, “Catch Us If You Can.”

Lyrics to The Monkeys’ Theme Song

The Courtship of Eddie’s Father

Written and performed by Harry Nilsson – of “Everybody’s Talkin” and “Me and My Arrow” fame – the song was played over the opening credits which usually featured the father and son in a touching moment.

This show featured the hijinks of a radio station played from 1978 to 1982. Sung by Steve Carlisle, the song was written by the show’s creator Hugh Wilson and composed by Tom Wells. A single of this TV theme song charted at #65 in 1981.

Baby, if you’ve ever wondered,
Wondered whatever became of me,
I’m living on the air in Cincinnati, Cincinnati, WKRP.

Got kind of tired packing and unpacking,
Town to town and up and down the dial
Maybe you and me were never meant to be,
But baby think of me once in awhile.
I’m at WKRP in Cincinnati.

Written by DJ Jazzy Jeff & The Fresh Prince (Will Smith), this song became an instant classic.

Now, this is a story all about how
My life got flipped-turned upside down,
And I’d like to take a minute
Just sit right there.
I’ll tell you how I became the prince of a town called Bel Air
In west Philadelphia born and raised,
On the playground was where I spent most of my days
Chillin’ out maxin’ relaxin’ all cool
And all shootin some b-ball outside of the school.
When a couple of guys who were up to no good
Started making trouble in my neighborhood,
I got in one little fight and my mom got scared
She said ‘You’re movin’ with your auntie and uncle in Bel Air’.
I begged and pleaded with her day after day
But she packed my suit case and sent me on my way.
She gave me a kiss and then she gave me my ticket.
I put my Walkman on and said, ‘I might as well kick it’.

More from the Prince of Bel Air

First class, yo this is bad
Drinking orange juice out of a champagne glass.
Is this what the people of Bel-Air living like?
Hmm this might be alright.
But wait I hear they’re prissy, bourgeois, all that
Is this the type of place that they just send this cool cat?
I don’t think so
I’ll see when I get there,
I hope they’re prepared for the prince of Bel-Air
Well, the plane landed and when I came out.
There was a dude who looked like a cop standing there with my name out
I ain’t trying to get arrested yet,
I just got here
So I sprang with the quickness like lightning, disappeared.
I whistled for a cab and when it came near
The license plate said fresh and it had dice in the mirror,
If anything I could say that this cab was rare
But I thought ‘Nah, forget it’ – ‘Yo, homes to Bel Air’.
I pulled up to the house about seven or eigth
And I yelled to the cabbie ‘Yo homes smell ya later’,
I looked at my kingdom
I was finally there
To sit on my throne as the Prince of Bel Air.

“We finally got our piece of the pie!”

The show lasted 11 seasons, one of the longest running comedies on TV, and featured George and Louise Jefferson who just moved from Queens to Manhattan. A spin-off of “All in the Family,” George had been neighbors of Edith and Archie Bunker. The theme song was written by Ja’net Dubois and Jeff Barry and performed by Dubois and a gospel choir. Dubois played Willona Woods on Good Times – Dynomite!

Beginning in the second season of the show, the theme song was sung by the Ron Hicklin Singers. There were also the singers behind the Partridge Family TV show.

“Who can turn the world round with her smile?” Mary could, and she did.

Friends – I’ll Be There For You

Performed by the Rembrandt’s as the Friends’ cast played in the fountain. Didn’t this song make you feel just a little better?

This song peaked at #5 on the Billboard Hot 100 in 1976. Written by Norman Gimbel and Charles Fox, Target stores ultimately licensed the song for an ad campaign in 2014. An updated version of “Rock Around the Clock” was also incorporated into the opening song.

Saturday morning was filled with some real gems for theme songs. Check these out and let us know what you think.

How great do the graphics go along with this song? Pretty spectacularly!

“His son Elroy…Daughter Judy…Jane his Wife” was a great introduction to George’s family.

George of the Jungle

Watch out for that tree!

Scooby-Doo, Where are You?

Has there ever been a more lovable TV dog than Scooby?

It was a right of passage to learn all the lyrics to this song if you were a child in the 60s.

You have to love everything about this show and song!

“Speed of lightning, bolt of thunder…”

Shoeshine Boy’s alter ego, Underdog, was in love with Sweet Polly Purebred. When she was in trouble, watch out! “There’s no need to fear, Underdog is here!”

Theme songs that outlined the plot were helpful, especially in the early stages of a show. For anyone under 12 years of age, the playing of the theme song, was your opportunity to sing along.

“Let me tell you a story about a man named Jed…” began one of the most memorable TV theme songs of all time.

Eva Gabor and Eddie Albert belt out this favorite.

“But, there cousins, identical cousins…”

All in the Family (Those were the Days)

Edith’s singing seems to make this song even better.

“The Adams Family started when Uncle Fester farted” are not the true lyrics. I was greatly misled by my older brother.

If every phone had this for a ring tone, the world would be a better place.

How good is this?

Short, but oh so good. I like how in the older seasons, Rob learns to walk around the hassock that’s tripping him.

There are also words to this song, but the TV show kept it instrumental.

The theme song made you want to suit up for the good guys.

When Maxwell Smart started talking into his shoe, it made Charades that much easier.

“Where everybody knows your name…”

So, how did we do? Are these the best TV theme songs? What song would you add? What did we miss?

31 Song Lyrics That Changed the Way We Talk