Ballads like "Last Kiss," "Tell Laura I Love Her," and "Teen Angel," tell tragic stories of loss, and yet, we still can't stop listening.

Songs about death and teen tragedy are nearly always sad, frequently unsettling, and sometimes masterpieces of the artist’s craft. We’ve assembled five of the most interesting songs in this teen tragedy and the deathrock genre for your listening enjoyment. Also, we’ll take a dive into the origins of the songs selected.

Other names for this genre include death discs, tearjerkers, and splatter platters. These and other colorful descriptions can usually be attributed to DJs who played these songs in the 1950s and 1960s.

Sad songs about death and their meaning

Some experts consider this genre the quintessential teen rebellion music — the only escape from parental control was via death (that’s a hard take on that era’s parenting). While others look at more basic motives like the fact that the words die, cry, and goodbye rhymed. And, another point could be made that songwriting was influenced by “the day the music died.” The day the music died, per Don McLean, happened in 1959 when Buddy Holly, the Big Bopper (J.P. Richardson), and Ritchie Valens passed away in a plane accident near Clear Lake, Iowa. 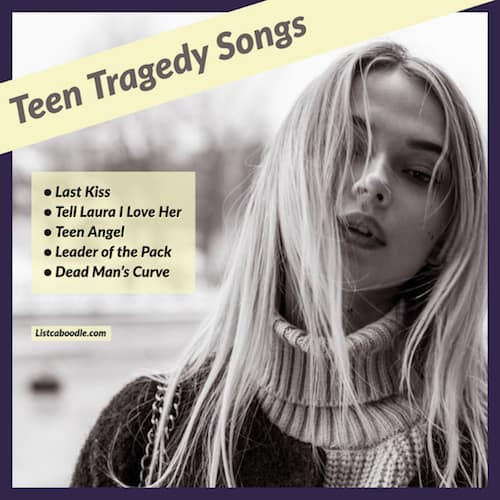 1.) “Last Kiss” by J.Frank Wilson and the Cavaliers

This song tells the story of a young couple who are out on a date and their car crashes. The male driver initially blacked out from the force of the impact, comes to and goes to comfort his girl. Holding her in his arms, he gives her one last kiss before she passes away. Tragic and sad, the haunting lyrics put the listener right at the scene.

Well, where oh where can my baby be?
The Lord took her away from me.
She’s gone to heaven, so I got to be good,
So I can see my baby when I leave this world.

Initially released by Wayne Cochran in 1961, but it didn’t initially strike a chord with audiences. However, when revived by J. Frank Wilson and the Cavaliers, the song seemed to fit well the other teen tragedy songs of the era. Could there be a sadder ending to a song that highlights literally the last kiss between two young lovers?

Songs about death based on a true story?

There were some reports that the song lyrics were based on an actual accident in rural Georgia where two 16-year-olds tragically died. Per the legend, the two teens’ car hit a tractor-trailer while out on a date. A local gas attendant was asked to help with the recovery of the bodies and apparently didn’t recognize that one of the victims was his own daughter. Cochran, who wrote the lyrics, lived just 15 miles from the crash site. The problem with this account is that the accident took place after the first recording of the song. So, the true inspiration for the song may never be known.

Cochran named the song, “Last Kiss,” because it was the climax of the sad story. The song’s title also took advantage of another popular song by Floyd Cramer called, “Last Date.”

J. Frank Wilson and the Cavaliers worked all afternoon on their version and finally wrapped things up on the take number 64. The song became a national hit in the fall of 1964 and eventually reached #2 on the charts and sold over one million copies. J. Frank Wilson and the Cavaliers were one-hit wonders. Wilson, who died of alcoholism at the age of 49 had been cheated out of the earnings of his sole hit by his label and manager.

“Last Kiss” by J. Frank Wilson and the Cavaliers

“You can try album after album to write a hit and spend months getting drum sounds and rewriting lyrics, or you can go to a used record store and pick out a single and fall in love with it,” said Pearl Jam’s guitarist Stone Gossard. Pearl Jam’s vocalist Eddie Vedder had done just what Gossard described. He found an old record featuring the song and talked the band into performing it.

Ray Peterson overcame childhood polio and put his four-octave voice to good use. Although he had a string of modestly successful songs, he gained most of his fame from two notable two songs. His first hit was “The Wonder of You” which charted in Billboard’s Top 40. The song was later covered by Elvis Presley.

In 1960, “Tell Laura I Love Her,” became a Top 10 hit. The song, another teenage tragedy, was written by Jeff Barry and Ben Raleigh. The original lyrics to the song didn’t focus on a car race, but rather a rodeo. However, the record label RCA insisted that Barry rewrite the lyrics in order to leverage the car-theme of the #1 song at the time, “Teen Angel.” Ultimately, “Tell Laura I Love Her” peaked at #7 on the U.S. Billboard Hot 100 chart.

The song was not without controversy. Many radio stations banned the song from being played out of public concerns that listening to it may cause teens to commit suicide. Nonetheless, the song was a hit in 14 countries. An answer song to this was recorded by Marily Michaels and titled, “Tell Tommy I Miss Him.” Skeeter Davis also recorded the same song.

Later in life, Peterson worked as a Baptist Church minister and played the golden oldies music circuit. He died of cancer in 2005. Peterson was inducted into the Rockability Hall of Fame.

Mark Dinning’s sister, Jean, along with her husband Red Surrey wrote this ballad that tells the story of the tragic death of the narrator’s girlfriend when her car, unfortunately, stalls on railroad tracks. Her boyfriend, the narrator, rescues her, but she runs back to the car to retrieve her high school class ring — Jostens would be proud.

Jean Dinning was part of the act, “The Dinning Sisters,” who gained national exposure on the NBC Radio Show titled “Barn Dance.” The Dinning Sisters most popular song charted at #5 and was titled, “Buttons and Bows.”

Mark Dinning, born in Drury, Oklahoma, in 1933 learned to play guitar at the age of 17 years old. There were nine Dinning siblings in all. He earned a contract with MGM when he was 24 years old. “Teen Angel” was a one-hit-wonder. The song charted at #1 in 1960 the United States, but only after a sluggish start.  It only made it to #37 in the UK because many British DJs refused to play it. They considered it too morbid.

The song was featured in the 1973 popular film, “American Graffiti,” which was set in 1962. Also, notably, Sha Na Na performed the song at the 1969 Woodstock Festival.

4.) Leader of the Pack by the Shangri-Las

“Leader of the Pack” was written by Jeff Barry, George “Shadow” Morton, and Ellie Greenwich. Barry also wrote, “Tell Laura I Love Her.”

The song tells the story of Betty who is asked by friends if indeed she is dating the leader of a motorcycle gang named Jimmy. After Betty breaks up with Jimmy at her friends’ urging, Jimmy crashes and dies on a rainy surface while riding his motorcycle.

The Shangri-Las — All-Girl Group from Queens

The Shangri-Las group was formed in Queens, New York and composed of two sets of high school sisters: The Weiss’s and the Gansers. Mary Weiss was the lead singer. The name Shangri-Las comes from a restaurant in Queens. The group had a “tough girls” theme which set them apart from more traditional all-girl groups. The bad-girl reputation apparently helped them fend off advances from men while they were touring.

To record the song and to add some realism to the production, a real motorcycle was driven into the recording studio. No one was arrested, but a ticket was issued according to legend. Another account of the motorcycle engine sound origin suggests that it was taken from an effects record. (I like the first account better.)

Wherever the engine sounds came from, that revving noise helped drive the song to the #1 position on the charts in November 1964. In 2004, Rolling Stone magazine ranked the song as the #447 song in its 500 Greatest Songs of All Time list. The song was featured in Martin Scorsese’s “Goodfellas.” Many recording artists and bands  – from Amy Winehouse to Pink Floyd – have cited the Shangri-Las as influencing their music.

The Shangri-Las’ “Leader of the Pack” Video — songs about death

This classic tells the story of a street race gone bad. The narrator, driving his Corvette, pulls alongside a Jaguar and challenges him to a race. The conclusion of the song features the narrator recounting his memories of the race to a doctor.

The writers of this song are the Beach Boys’ Brian Wilson, Jan Berry, Roger Christian, and Artie Kornfeld. Kornfield went on the help produce Woodstock.

In real life of April 1966, Jan Berry actually crashed his car, a Corvette, into a parked truck very near Dead Man’s Curve. He spent months in a coma but recovered enough to perform with Dean Torrence. Dead Man’s Curve is a stretch of road on Sunset Boulevard near the UCLA campus in Los Angeles, California.

The song inspired a made for TV movie about Jan and Dean that was broadcast first in 1978. The Carpenters did a cover version of the song.

These types of teen tragedy songs were most popular in the 1950s and 1960s, and there appeared to be a certain formula for success. Let’s take a deeper dive. 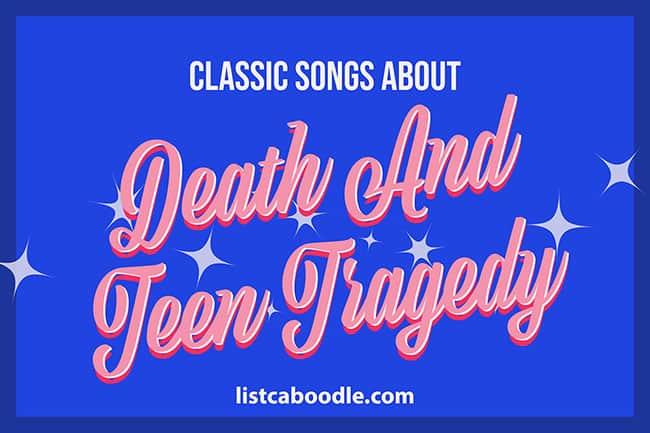 Each of these songs generally included:

1.) A tragic accident resulting in death.
2.) The romantic love of a young couple.
3.) Sung from the perspective of the dead person’s lover.
4.) Instrumentation and sound effects to add drama and set the tone.
5.) A narrator’s sad expression of unending love to his’ or her’s lost sweetheart.

The songs are sad, and even at times morbid, and yet still very compelling to music lovers of that era and beyond.

Mike is a music enthusiast, writer, and co-founder of Listcaboodle.

You’re on the Classic Songs About Death And Teen Tragedy page.