Corny and cringeworthy, but dang if I didn't see you smiling.

Cringe-worthy. Simplistic. Predictable. Dad jokes are the realm of the man who reaches for the easy laugh. He won’t hesitate to use a pun if he has to. Usually its your uncle, dad or even the plumber making a service call. You know the type. He’ll go through his entire repertoire of awful jokes, just as long as he’s got an audience. We’ve collected some of the best here. So sit back, prepare to laugh uncomfortably and enjoy!

I’m thinking about getting a new haircut…
I’m going to mullet over.

Why can’t you have a nose 12 inches long?
Because then it would be a foot

I asked my son if he had seen my newspaper.
He told me that newspapers are old school.
He said that people use tablets nowadays and handed me his iPad.
That fly didn’t stand a chance.

What did the buffalo say to his son when he left for college?
Bison.

Why did the scarecrow win an award?
Because he was outstanding in his field.

What time did the man go to the dentist?
Tooth hurt-y

Why can’t you hear a pterodactyl using the bathroom?
Because the P is silent.

“The more annoying I am to my child, they’re still my child and I’m still their dad. You’re not going to sever this relationship over a bad joke”
-Jerry Seinfeld, Interview with Mr. Jerry Seinfeld 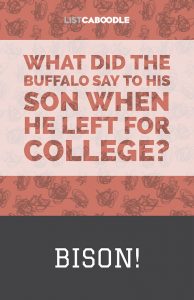 Corny dad jokes to make you feel at home

The cashier asks: “Would you like your milk in the bag?”
I reply: “No, just keep it in the carton, thanks.”

Why did the can crusher quit his job?
Because it was soda-pressing!

Did you read about the guy who got killed falling into a machine at the glasses factory?
Really made a spectacle of himself.

A duck hands some ChapStick to the pharmacist who asks “Will you be paying cash or check?”
The duck says, “Just put it in my bill.”

There once was a man fired from the orange juice factory.
Why? Oh, he couldn’t concentrate!

What do alligators drink when they’re thirsty?
Gatorade.

What is a soft drink’s favorite musical?
Fanta of the Opera.

A Man Walks into a Bar Jokes

A guy walks into a wedding reception. He goes up to the Bartender and asks, “Is this the punch line?”

Ok, a skeleton walks into a bar and says, “Gimme a beer, and a mop.”

A tennis ball walks into a bar.
The barman says, “Have you been served?”

Man walks into a bar, and was disqualified from the limbo contest.

Louie Armstong walks into a bar in Tibet where the high priest is the bartender. Louis says, “Hello, Dahli!”

A cat walks into a bar. Then out of the bar. And, then back in. Then out again.

A plateau is the highest form of flattery.

What did one ocean say to the other? Nothing, they just waved.

The best thing about living in Switzerland? Well the flag’s a big plus.

Did you hear about the restaurant on the moon? Great food, no atmosphere.

I told my wife she was drawing her eyebrows too high. She looked surprised.

What rhymes with orange? No it doesn’t.

Where did George Washington keep his armies?
In his sleevies!

Why do SCUBA divers fall backwards out of the boat?
Because if they fell forwards they would still be in the boat!

Why is it a good idea to take two shirts when you go golfing?
In case you get a hole in one.

Favorite Dad Jokes for any Occasion

A Spanish magician said he’d disappear on the count of three. So, he goes uno, dos, and disappears without a tres!

Have you heard about the circus?
It’s intense.

Did you hear about the man who stole a calendar? He got 12 months.

What happens if a frog parks illegally? They get toad.

What’s brown and sticky?
A stick.

A piece of string thats all tangled up walks into a bar and asks for a drink, the barman says, “Are you a piece of string, cause we don’t serve string here.” The string looks at him and says, “Nope, i’m a frayed knot.”

What did Batman say to Robin before they got in the car?
Get in the car.

A man goes to the barber and the barber asks, “How would you like your hair cut?”
In silence.

Knock, knock.
Who’s there?
Edge.
Edge who?
God bless you!

It’s hard to explain puns to kleptomaniacs because they always take things literally.

Remains to be seen if glass coffins become popular.

Atheism is a non-prophet organisation.

I gave all my dead batteries away today — free of charge!

When corduroy pillows were invented, they made headlines.

Did you hear about the kidnapping at school? It’s fine, he woke up.

The past, present & future go to a bar; things were tense.

The invention of the spade was ground breaking.

Many dads are from that generation where good-natured – although frequently corny – humor was popular. The only advice I can give you is to just grin and bear it.